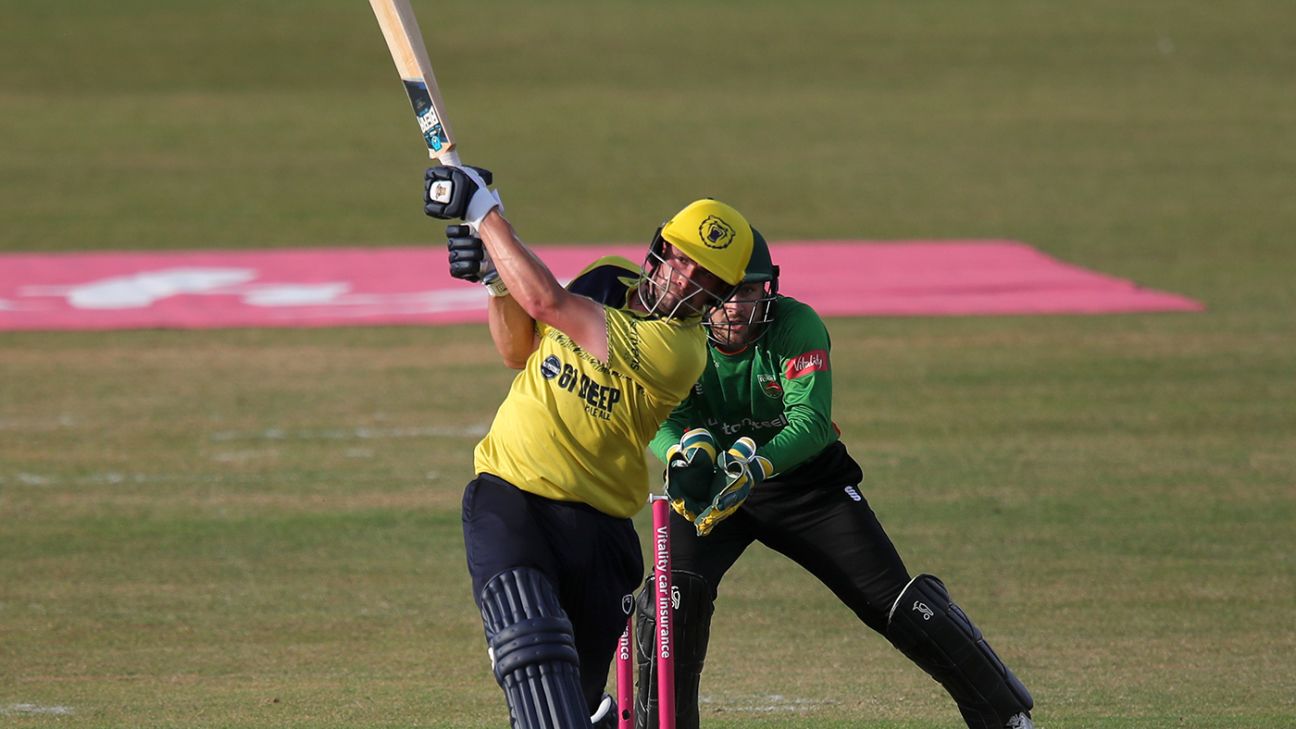 Visitors rolled aside for 144 despite battling fifty from Tom Taylor

Michael Burgess, posting a one-day career-best of 73 for the second time in 15 days, and Will Rhodes, with 65, set up comfortable victory for Warwickshire over Northamptonshire by 134 runs in the Royal London Cup at Edgbaston.
With rain reducing play to 46 overs a side, the home team, put in, were 11 for 2 after 19 balls but the pair’s stand of 133 paved the way for a late onslaught. Matt Lamb, belting 65, and the innovative Dan Mousley, with 54 from 44 balls, smashed all but two of the 104 ultimately hammered from the final eleven overs.
Both men fell swinging in the last seven balls but a target of 279 at 6.07 an over always looked demanding. By the reply’s eighth over, it seemed formidable. As Ricardo Vasconcelos, the skipper and key batsman, edged behind, cutting at Jordan Bulpitt, Northants became 35 for 3.

Bulpitt’s outswing to fellow left-handers also did for Saif Zaib and, with Manraj Johal also claiming two in his opening burst, the inexperienced new-ball partners, with only seven previous appearances between them, impressively covered for injuries to four senior seamers.

Rout beckoned when Rhodes, the captain, brought himself on to strike with his thirteenth ball, Rob Keogh dangling his bat to give Burgess a third successive catch at the wicket. With five gone and seven an over now needed, the match was essentially decided an hour into the visitors’ response.

To their credit, they refused to submit. But sadly, Charlie Thurston, pulling at Ethan Brookes, top-edged into his chin and had to retire on 21. Tom Taylor famously helped win a T20 game from the dead here last September but, though he reached an entertaining and unbeaten 57 from 65 balls, the four remaining wickets went at the other end in five overs, Thurston unable to resume.

Earlier, in a deceptive start, Ed Pollock lost off stump to Jack White’s inswing from the second ball of the match without a run on the board and his inform opening partner Rob Yates was soon gone for 5. But Rhodes and Burgess followed 35 minutes of quiet reconnaissance by taking control on a pitch offering slow turn.

This Keogh exploited when his off-spin found Rhodes’s leading edge for the bowler himself to hold a fine, diving catch to his right, and he had Burgess tamely lobbing to mid-wicket. Nobody could shackle Lamb and Mousley, however.