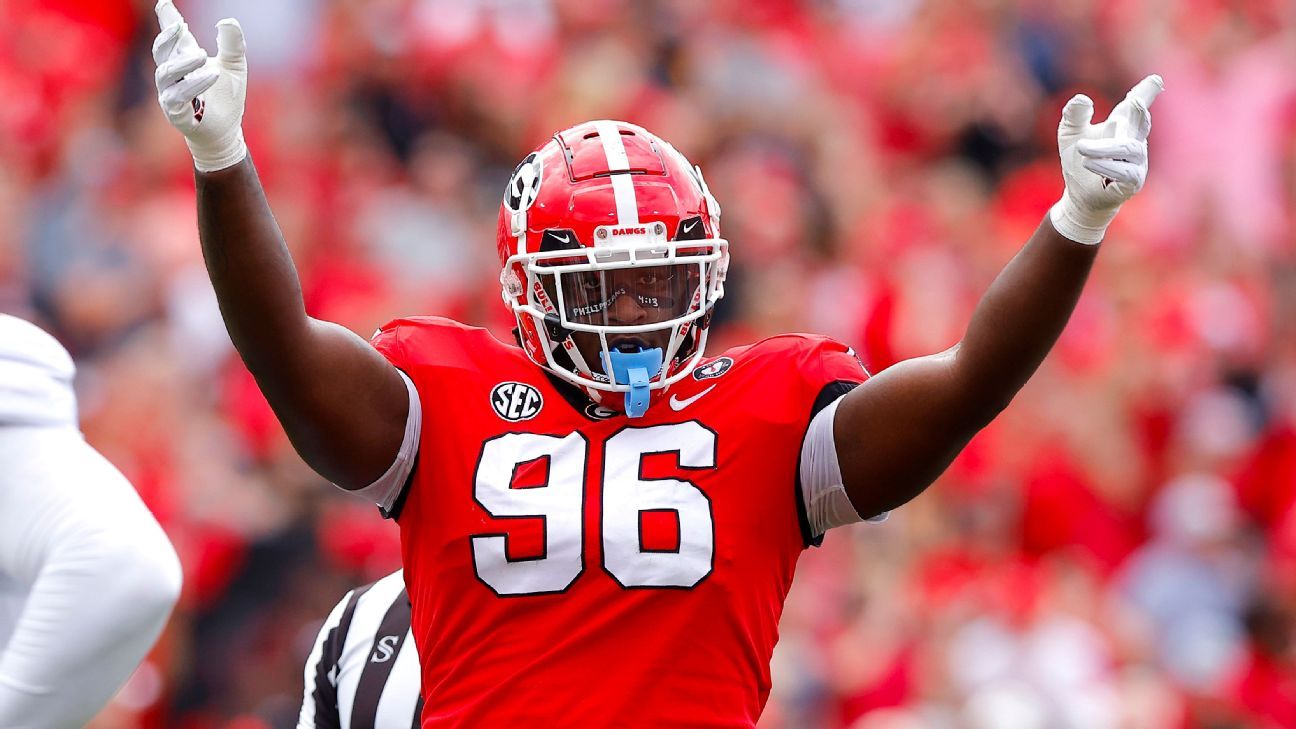 ATHENS, Ga. — Defending national champion Georgia might not have been No. 1 in the first College Football Playoff rankings earlier this week, but the Bulldogs left little doubt Saturday who belongs in that top spot.

Their 27-13 beatdown of No. 1 Tennessee before a deafening crowd at Sanford Stadium was about as thorough as it gets. Senior quarterback Stetson Bennett passed for 257 yards and two touchdowns and ran for another, and the Georgia defense held Tennessee’s high-scoring offense without a touchdown until the final minutes of the game.

“The players on this team bought in,” said Georgia coach Kirby Smart, who is 5-0 at home against AP top-10 ranked teams. “They understood the plan. They executed the plan. They played extremely physical. They played without ego, and they played complementary football, which is always important. I’m really proud of the way our guys played.”

The Bulldogs, who were ranked No. 3 in the initial CFP rankings, dominated the line of scrimmage, as Bennett repeatedly had plenty of time to throw the ball. He hit deep shots down the field of 52, 49 and 37 yards. Meanwhile, the Vols had no answers on offense for Georgia’s swarming defense. Tennessee came into the game leading the country in scoring (49.4 points per game) but was forced to punt three times in the first quarter alone. That’s after punting a total of 18 times in the previous eight games.

“I think physical toughness won out. We talked all week about hunting with a purpose,” said Smart, whose defense was missing its top pass-rusher, senior outside linebacker Nolan Smith, who is out for the season with a torn pectoral muscle.

Georgia (9-0) took a commanding lead in the SEC Eastern Division race and also put itself in prime position to make the College Football Playoff even if it were to lose in the SEC championship game, which would be a similar scenario to what happened last season.

Bennett, 25, was again the picture of poise for the Bulldogs. “Just a winner,” Smart called him. Bennett was a little perturbed, too, over what he said were 600 to 700 calls he received all day Friday from Tennessee fans after his cell phone number was leaked to the public.

“I wouldn’t say it was motivation,” Bennett said of the phone calls, “but there’s probably something there, so yeah.”

The Vols (8-1) were shaky early and couldn’t cash in for a touchdown after a Georgia fumble, and it only got worse for them from there. Pre-snap penalties, particularly false-start penalties, tormented a Tennessee offense that couldn’t protect senior quarterback and Heisman Trophy frontrunner Hendon Hooker. The Vols also failed to win many one-on-one matchups on the perimeter against the Georgia defensive backs.

“We didn’t play our cleanest best football,” Tennessee coach Josh Heupel said. “Part of that is they have a really good football team. At the end of the day, you hate the outcome, but you’ve got to reset.”

It was Georgia’s sixth straight win over Tennessee, which was bullied physically after scoring a combined 92 points in wins over ranked opponents Alabama and LSU earlier this season.

“They’re way more physical than Alabama,” said Tennessee receiver Jalin Hyatt, who was held to six catches for 63 yards after catching 11 touchdown passes in his previous four games. “Like I said, the mistakes were on us, and we’ve got to improve and do a better job and be ready [next week] for Missouri.”

In the third quarter, the rain started pouring down at Sanford Stadium, and the Bulldogs just continued to pour it on a Tennessee team that was greeted with chants of “overrated” by the Georgia student section. The Vols were playing in the loudest and most hostile environment they have faced all season. They were clearly rattled by the crowd noise, which reached rock-concert decibel levels at times.

“Even when it rained, there wasn’t an empty seat in the house other than the ones [Tennessee] purchased,” Smart said. “Our fans were elite today. We asked them to be. They responded. They get the second-place vote.”

Hyatt said it was so loud at times that the players couldn’t hear the snap call from Hooker.

“Give their fans credit. They disrupted what we wanted to do on offense today,” Hyatt said.

Georgia’s defense has allowed just eight touchdowns in nine games this season and made life miserable for Hooker, who was held without a touchdown pass for the first time in 20 games. He was also sacked six times (five times in the second half) and finished with just 195 passing yards.

“I feel like we were really prepared for today, and I felt like it showed,” said Georgia cornerback Kelee Ringo, who intercepted Hooker in the end zone in the second quarter.

Tennessee’s deep passing game was rendered non-existent against a Georgia defense that has been injury-plagued this season. But the Bulldogs showed off their depth and didn’t let the Vols’ up-tempo style and explosiveness affect them the way it has others Tennessee has faced this season. The Vols only had one pass play longer than 17 yards, and they came into the game with an FBS-leading 36 plays from scrimmage of 30 yards or longer.

“You play Tennessee, and they go for the knockout blow in the first round,” Smart said. “You’ve got to survive it.”

Keeping Hooker at bay was critical. Entering the game, he had accounted for 59 touchdowns and thrown just three interceptions since taking over the starting job in Week 3 last season. When he was slammed to the ground on Tennessee’s final fourth-down play, he was slow to get up and trotted gingerly to the sideline.

Heupel said he would be “real” about this loss with his players.

“And at the same time, understand we are a good football team,” Heupel said. “It didn’t happen tonight on the 60-minute clock. That’s the great thing about sports. You only get one opportunity man. We’ll go back to work.”