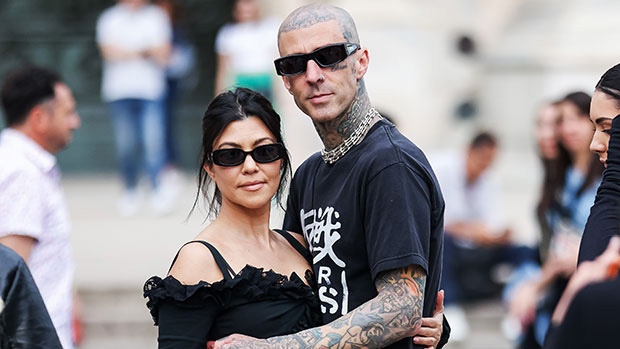 Travis Barker, 47, has a special new entry in his tattoo collection! The Blink-182 drummer debuted a new tattoo on his leg in the third and fourth photos in his Instagram photo dump below. Travis’ new ink appears to depict his wife Kourtney Kardashian‘s eyes, and the resemblance is absolutely uncanny. Travis lifted up his black boxers in a bathroom mirror selfie to show off the tattoo, before giving his fans a close-up glimpse of his ink in the following photo.

Travis’ huge tattoo features Kourtney’s eyes and eyelashes etched in black ink. It’s not Travis’ first tattoo dedicated to the 43-year-old reality star, but it’s certainly one of the most remarkable ones that he has. Travis showed off all his tattoos, including the one of a woman holding a boom box on his chest, when he took the mirror selfie.

Kourtney popped up in the first photo from Travis’ post. The Kardashians star took a mirror selfie in the same bathroom, as Travis hid behind his wife on his knees and placed his hands on her thigh. Travis cheekily captioned his post, “Oh hey there,” which was “liked” by Kourtney.

And in true love bird fashion, Kourtney has even tattooed Travis herself! The mom-of-three inked her man with the phrase “I love you” on his forearm. Later, the POOSH founder tattooed her initial “K” on Travis’ arm. Travis and Kourtney are just madly in love, and they have the ink to prove it.

Fai Khadra: 5 Things To Know About The KarJenner Family Friend On ‘The Kardashians’

SRK reacts to video of kid saying she didn’t like ‘Pathaan’, has a suggestion up his sleeve