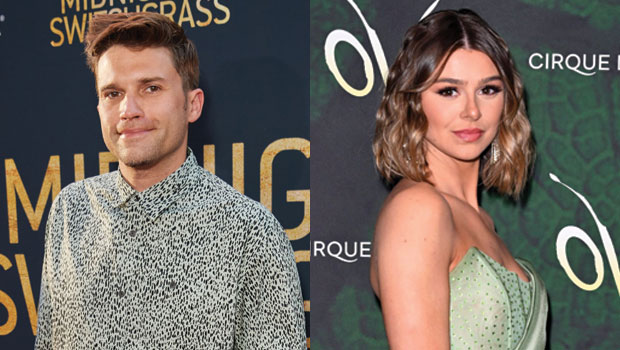 Tom Schwartz, 39, and Raquel Leviss, 27, were not just getting “cozy” at Scheana Shay and Brock Davies‘s wedding on Aug. 23; They were seen completely making out. While the shameless PDA may have shocked some Vanderpump Rules fans, Tom low-key hinted at digging Raquel just weeks before on the July 22 episode of Scheana’s Scheananigans podcast. After sending Raquel a shout-out, the newly single Tom gushed about her personality. “I was so caught up in my own little world and I was married — I never took time to get to know Raquel,” he said to Scheana, 37. “She was always cool. I just never really took time to invest in her. That’s a horrible way to phrase it. I never really gave her a chance.” He added that the ex of James Kennedy “has so much depth and character.”

More shockingly, Tom kept his lips sealed when Scheana asked him if he would ever kiss Raquel after he denied rumors that they locked lips at Coachella in April. And when they played a game of F—k Marry Kill, a game that makes a player choose who they’d sleep with, marry, or murder out of three provided options, he answered he would marry Raquel, but said it quite confidently as if it were actually an option. “I think I’m gonna marry Raquel,” he said. He already kissed Raquel, so maybe marrying her is not too far out of the picture!

Tom and his estranged wife Katie Maloney, 35, announced their separation in March after rumors flew that their marriage was over when Katie was spotted in public without her wedding ring. And although they have confirmed their divorce, Katie was not pleased with Tom and Raquel’s PDA. “Prior to the actual ceremony, the day of, I saw Tom and Raquel heavily making out in the cenote, which is an underwater cave. Several other people did too as it was not that private of an area,” a source who attended the Cancun wedding between Scheana and Brock told HollywoodLife EXCLUSIVELY. “Katie went off and cameras were rolling on the entire thing. She was screaming at them, and they were yelling back.

Furthermore, the source saw the reality stars making out before the wedding, and said they “were not doing a very good job” at hiding it. They added, “That same day, but prior to that incident, I saw them making out in the spa area. They had their hands all over each other.” Katie reportedly did not show up to the after-wedding party, to no surprise.

Although Raquel and Tom have yet to publicly address their relationship status, between Scheana’s podcast and all the action that went down at the wedding, there’s clearly something going on between them. Perhaps, fans will get to see their romance unfold during the next season of VPR.