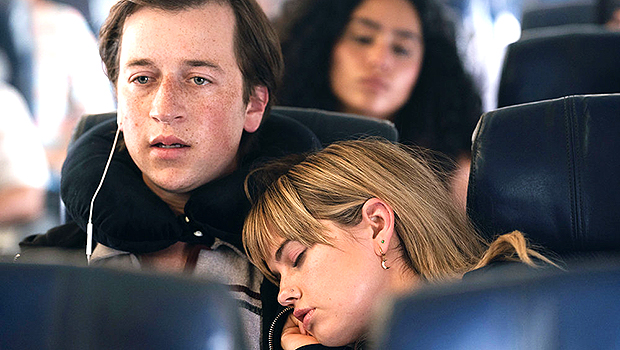 A vacation isn’t always about relaxation. The Resort follows the exploration of the Mayan Riviera’s most bizarre unsolved mysteries. A married couple goes on a journey, in the midst of their anniversary trip, to try and find out what really happened to two teenagers named Sam and Violet back in 2007. HollywoodLife spoke EXCLUSIVELY with Skyler Gisondo and Nina Bloomgarden about the show, and they admitted that they didn’t even know Sam and Violet’s fates at the very beginning.

“I definitely didn’t know right away,” Nina said. “We didn’t get all the scripts until I think we were already shooting. I asked. I was like, ‘I need to know what this is going to look like.’ And that actually was really helpful from Andy [Siara] because Andy did give me an outline of what was to come. For me, it’s important to know more about my character and to know what she’s after, so I can kind of think about that before. I didn’t really put that much focus on the 2022 timeline or read that stuff because I think we both wanted to focus on what we were doing because we don’t know what’s going on with the other two.”

Skyler added, “I kind of prefer to stay in the dark for that reason Nina just said, just allowing yourself to be more present and not kind of tipping yourself off to what’s to come for you guys, or what other people are going through [that] your characters aren’t even aware of, or aren’t even in the same timeline. We got sent maybe the first 4 or 5 scripts early on, and I think I read like 2 or 3, and that was it. And then from there on, I would just kind of look at only our stuff before we filmed it. I didn’t read episode 7 and 8 until within days of filming those scenes. We’d get to set and people would be talking about it. I think everyone thought I just was not doing my job and was really mailing it in…”

‘The Resort’: Photos Of Cristin Milioti & More Stars Of The Mystery Series

With a mystery like this one, will all questions be answered? Nina weighed in, “I think so. I think the ones that might not be are meant to keep you thinking. There’s a lot of existential questions that we kind of address, and I think those are the ones that might be [left unanswered]. The show’s about nostalgia and the disappointment of it, and I think that plays into it. I think that’s important, actually, to not have all of the answers because, in life, you don’t have all the answers.”

Sam and Violet meet at the Oceana Vista Resort while on vacation. Skyler noted that they are drawn to each other because “two people who find themselves both in different ways and on different levels kind of heartbroken and are sort of in this tropical paradise where everyone else is happy, and they’re supposed to be happy, and they’re just not there. They’re kind of immediately drawn towards each other’s energies.”

For Nina, it was “right place, right time” for Sam and Violet. “I think they both are in certain situations where they’re dealing with something that has just recently affected them or affected them within the last year. I think they find solace in each other,” she said.

Meanwhile, Gabriela Cartol stars as Luna, one of the employees at the Oceana Vista Resort. Gabriela teased that Luna has a lot of information at her disposal when it comes to what’s going on at the resort. “She is the one that has the key to every door. That means she has information, and that means she has the power. She is a key element for this story,” she told HollywoodLife.

Gabriela added that she’s “completely aware” of the Sam and Violet mystery and “knows things.” The Resort will premiere July 28 on Peacock.