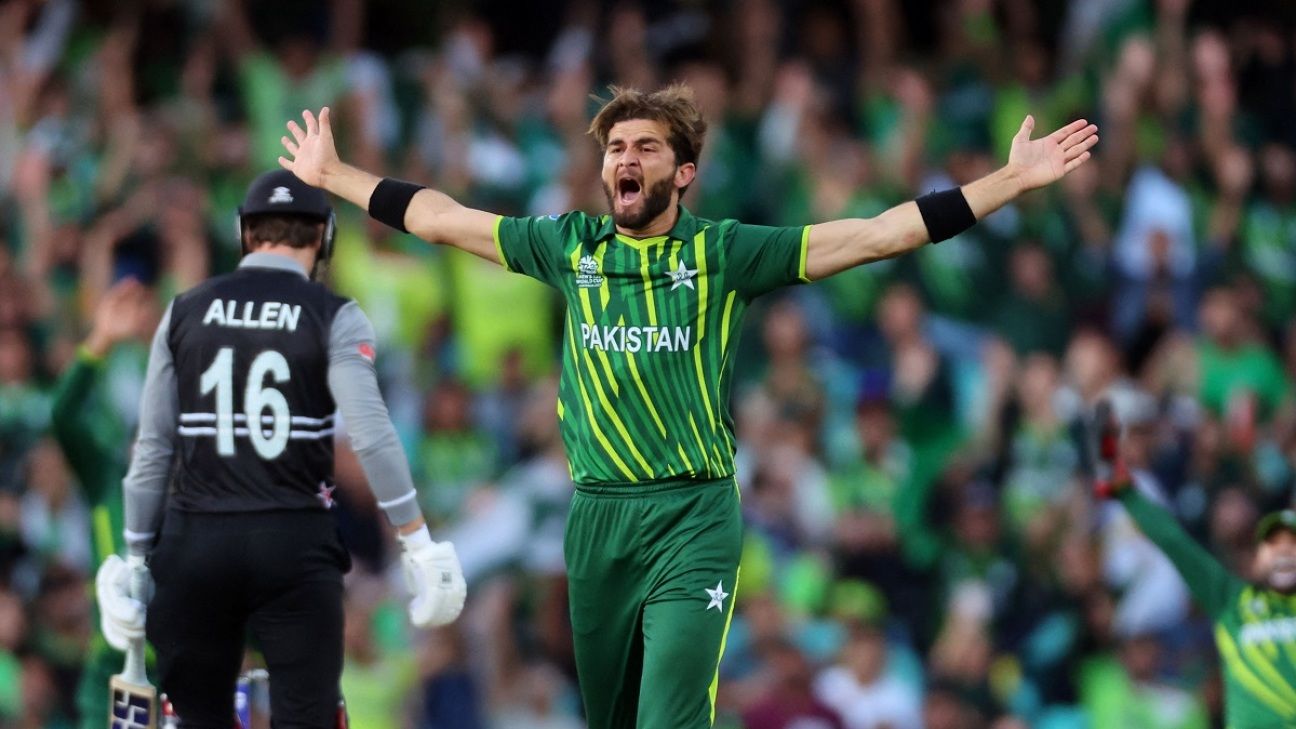 Pakistan and England have only met once before in the final of an ICC trophy – and by coincidence that game was also played at the MCG, 30 years ago. Pakistan won a famous encounter in the final of the 1992 50-over World Cup, but what are the key head-to-heads this time around?

Three of the six Super 12s fixtures scheduled at the MCG were abandoned without a ball being bowled, and both England and Pakistan tasted defeat on their previous visits: England fell short in a rain-affected run chase against Ireland, while Pakistan fans won’t need reminding about their final-over heartbreak against India.

The three totals batting first at this ground during the World Cup have been 159 for 8, 157 all out and 186 for 5; the first was chased down off the last ball, and the other two were successfully defended.

David Hussey, whose Melbourne Stars team play their home games at the MCG, told ESPNcricinfo before the tournament that the key for bowling teams was to get batters hitting square of the wicket and into the vast outfield. “The boundary sizes are your friend dead straight [as a batter], whereas square either side of the field is, of course, quite big,” he said.

“Bowlers use a lot of change-ups and a lot of slower balls into the pitch, so the teams are hitting to the big square boundaries to eliminate the boundary options. However, when you’re playing as a batter, you’ve just got to pretty much hit the gaps and run very, very hard. And when you get that full ball, take it on and hit the ball dead straight and use the shorter boundaries to your advantage.”

England and Pakistan will equal a record on Sunday for the most men’s T20Is played between two teams and the final will be the eighth official T20 they have contested in the last two months, after their recent seven-match series in Pakistan. They also played a warm-up match against one another at the Gabba in October, while England’s players regularly appear in the PSL and Pakistan’s in the T20 Blast. Neither team is likely to be surprised by the opposition.

There are a few caveats. With the exception of their warm-up in Brisbane, this will be the first time the teams have met on Australian soil and this World Cup has been a good reminder as to the importance of pitches and conditions in T20 cricket. A handful of players have limited experience of playing in Pakistan-England fixtures: Naseem Shah and Mohammad Haris have faced England once, while Ben Stokes will only be playing his second T20I against Pakistan and his first in six years.

Key players on both sides missed the recent series in Pakistan through injury and as a result, certain head-to-head match-ups have not happened much before: Jos Buttler, for example, has only faced seven balls from Shaheen Shah Afridi in T20 cricket, and five balls from Haris Rauf.

Should Pakistan bowl spin up front?

Fifteen teams out of 16 in this World Cup have bowled at least one over of spin in the powerplay. The only exception? Pakistan, who have split the first six overs between Afridi, Naseem, Rauf and Mohammad Wasim Jnr throughout the tournament.

It may be unlikely, but there is a case for that to change on Sunday – particularly if the new ball does not swing for Afridi, who will doubtless bowl the first over. During their recent bilateral series, Mohammad Nawaz bowled either the first or second over in every game and kept Alex Hales quiet: he conceded 19 runs off the 19 balls he bowled to him, and dismissed him once. Buttler, meanwhile, has never faced him.

There may also be a temptation to get Shadab Khan into the game early: he has dismissed Buttler twice in all T20 cricket and conceded 21 runs off the 21 balls he has bowled to him. Given the recent success of England’s opening pair, Pakistan will need to keep them quiet early on: Buttler and Hales have scored at a combined strike rate of 125.49 against spin in the powerplay in this tournament, compared to 154.08 against seam.

England’s openers have scored the vast majority of the team’s runs throughout the tournament: Hales and Buttler have 410 runs between them, while their third-highest scorer is Ben Stokes with just 56. While England have a notoriously long batting line-up, Pakistan will fancy their chances if they can take an early wicket and expose players who have had limited time in the middle in Australia.

Pakistan’s batting has been a mixed bag but their bowling has been consistently excellent, particularly since they made the decision to change the balance of their side after their defeat to India. They brought in Wasim Jnr for Asif Ali after failing to defend 159 in that game and since then have conceded totals of 130 for 8, 91 for 9, 108 for 9 (in 14 overs), 127 for 8 and 152 for 4. Since the start of the Super 12s, they have taken more wickets than any other team and have the tightest economy rate.

England will see their best chance of disrupting Pakistan as taking down the less-experienced bowlers in their side, namely Naseem and Wasim Jnr: both have bowled brilliantly in Australia, with economy rates of 6.00 and 6.61 respectively, but have only played 40 T20Is between them and England will look to put them under pressure.

Their openers have been particularly good at picking the bowlers they perceive to be weak links in opposition attacks and targeting them, as evidenced by Hales’ takedowns of Tim Southee against New Zealand and Kasun Rajitha against Sri Lanka.

Who should Pakistan use in the middle order?

Pakistan have used Nawaz and Shadab as middle-order ‘floaters’ with some success over the last three months, moving them up the order to target opposition spinners. It has not really worked in this World Cup: Nawaz made 4 off 11 in his only innings in the top five, while Shadab’s only innings of note came from No. 7 against South Africa.

That said, they will still consider being flexible in Sunday’s final. Haris has been a revelation since his selection but has scored 12 runs off 16 balls of spin in his fledgling T20I career, for twice out; all of his boundaries for Pakistan have been against fast bowlers. As a result, there is a case for shuffling him down the order if Mohammad Rizwan and Babar Azam bat through the powerplay, with England likely to bowl Adil Rashid, Liam Livingstone and potentially Moeen Ali through the middle overs.

Shan Masood has done a solid job in an anchoring role in this tournament and did well against Rashid and Moeen in Pakistan, scoring at a 150+ strike rate against both of them. If Pakistan make a bright start, don’t be surprised to see Masood shuffle up to No. 3 with Iftikhar Ahmed – who took Axar Patel and R Ashwin down in Pakistan’s previous game at the MCG – also capable of continuing their impetus through the middle overs.

Babar Azam vs Adil Rashid
Babar has been dismissed three times by Rashid and has scored 77 runs off the 61 balls he has faced from him, a steady strike rate of 126.22. However, he has struggled to pick Rashid’s googly in their past encounters: two of his three dismissals against him have been off wrong ‘uns, one in Manchester last year, the other in Karachi in September. Babar has been cautious against legspin this year, scoring at a strike rate of 113.69 against legspinners in T20Is: will he cast off the shackles on the big stage?

Liam Livingstone vs Haris Rauf
Livingstone has featured in every game England have played across the last two T20 World Cups, but has only faced 72 balls, highlighting how hard it can be for middle-order batters to make an impact in such a short tournament. However, Pakistan are his favourite opponent: he made his only international hundred to date against them in July 2021 and has enjoyed taking on Rauf’s pace: he has faced 19 balls from him in all T20s and scored 51 runs – including five sixes.

Moeen Ali vs Shadab Khan
Like Livingstone, Moeen has struggled to make an impact with the bat in this World Cup, having only faced 33 balls, but England will be tempted to promote him up the order to take on spin through the middle overs against Pakistan – particularly if Dawid Malan, another left-hander, fails to recover from a groin injury. Moeen has faced 36 balls from Shadab Khan in T20s, scoring 64 runs for two dismissals: he could be the man to take down Pakistan’s premier spinner.