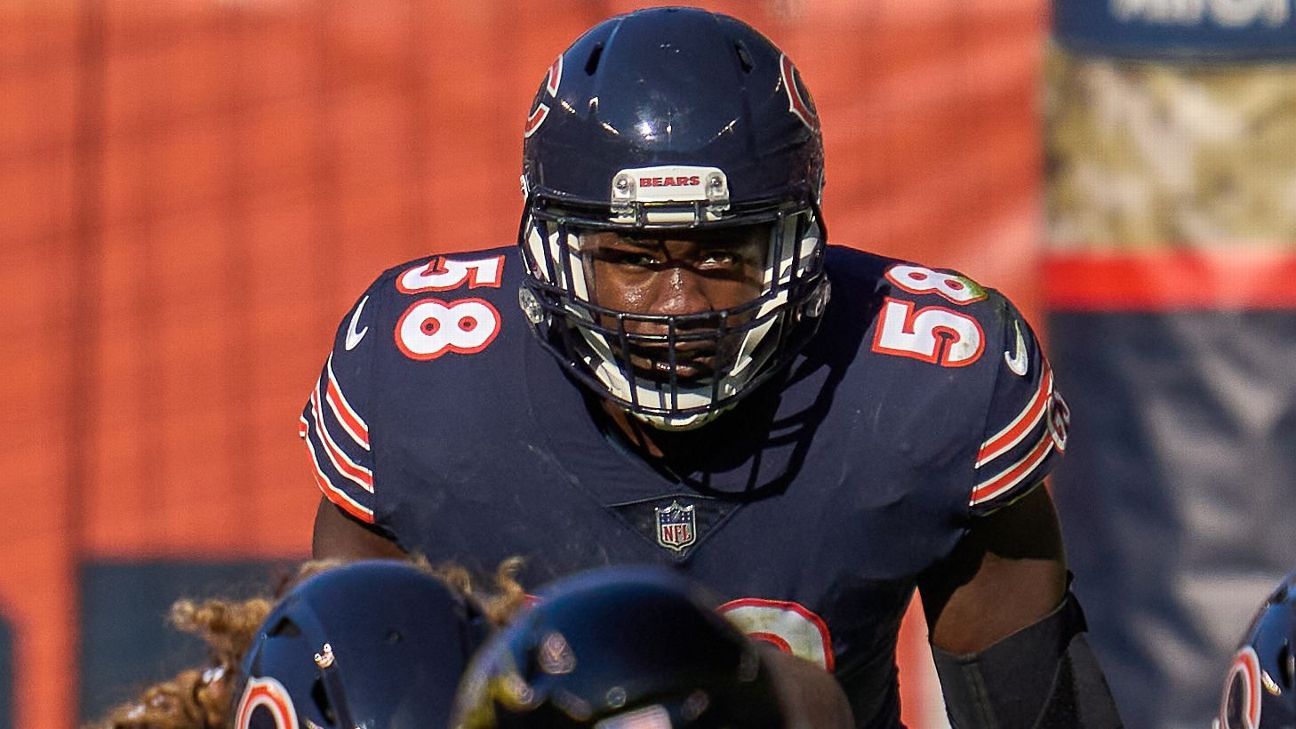 OWINGS MILLS, Md. — The Baltimore Ravens filled the biggest void in the middle of their defense with the NFL’s leading tackler.

The Ravens acquired Chicago Bears linebacker Roquan Smith on Monday, a team source confirmed, completing the deal a day before the NFL trade deadline. A source told ESPN’s Adam Schefter that the Ravens are sending the Bears a second- and a fifth-round pick in 2023 for Smith, who tops the NFL with 83 tackles this season.

As part of the trade, the Ravens also sent linebacker A.J. Klein to Chicago, a source told Schefter.

Baltimore has long been looking to upgrade at inside linebacker, as Josh Bynes has struggled and Patrick Queen has fallen short of first-round expectations. In late March, the Ravens were close to landing free agent Bobby Wagner, who decided to sign with the Los Angeles Rams. Smith, 25, has the second-most tackles (606) in the NFL since 2018, trailing only Wagner (656).

A two-time second-team All-Pro, Smith provides leadership and playmaking ability to a Ravens defense that is allowing 22.9 points per game, which ranks 20th in the NFL. That’s on pace for Baltimore’s worst defensive scoring ranking since 2015. This is another aggressive move by Eric DeCosta, who made his third trade-deadline deal in his fourth year as Ravens general manager. Baltimore acquired cornerback Marcus Peters in 2019 and pass-rusher Yannick Ngakoue in 2020. Fox Sports first reported the trade.

Smith was playing out the final year of his rookie contract — a $9.7 million fifth-year option — after the linebacker and the Bears failed to come to an agreement on an extension during the offseason.

He reported to training camp on time in July and was placed on the physically unable to perform list with an undisclosed injury. On Aug. 9, Smith publicly demanded a trade after he described contract talks between himself and the organization as “distasteful.” Smith ended his hold-in after nearly a month and returned to practice Aug. 20.

The pressure is on for the Ravens to sign Smith to an extension before free agency begins in six months. Baltimore likely won’t use the franchise tag on Smith because the team is expected to do so with quarterback Lamar Jackson if the sides are unable to reach a new deal.

Through eight games, Smith is third in the league in solo tackles with 52 in addition to that league-high 83 total tackles. His solo tackles tally alone would rank him second on the Ravens’ total tackles list, one behind Queen’s 53.

Smith also has 2.5 sacks and two interceptions. He is the second member of Chicago’s defense to be traded ahead of the Tuesday deadline. Defensive end Robert Quinn was sent to Philadelphia for a fourth-round pick last Wednesday. Including the second- and fifth-round selections Chicago received for Smith, the Bears have nine draft picks in 2023.