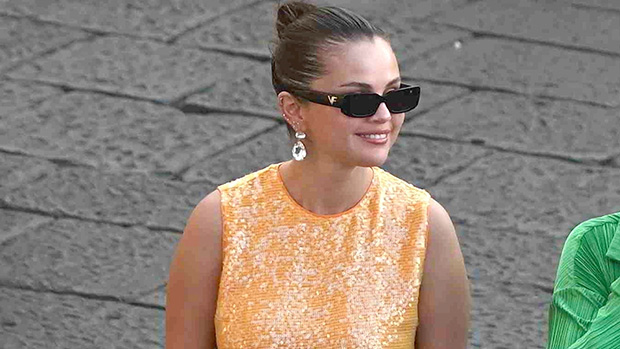 Selena Gomez sparkled brighter than the Italian summer sun while out and about in Capri. The 30-year-old singer and Only Murders In The Building star strolled through the city during her holiday in Italy, enjoying a little bit of sightseeing and shopping while wearing a vibrant orange ensemble. Selena wore a tangerine sequined top with matching knee-length shorts. Her dark locks were pulled back into a tight bun, and she shielded her eyes with some luxury sunglasses. To add a little more sparkle to her look, Selena rocked a pair of jeweled earrings.

The ”Wolves” singer wasn’t alone in this outing. She was joined by a handful of friends, including Andrea Iervolino. The Italian-Canadian film producer walked along in a pair of white pants, a white top, and a navy blue blazer. When Selena ducked into the Parada store, the paparazzi photographed Andrea standing outside with his phone in his hand.

Selena turned heads when she was first spotted aboard a yacht in Positano on Aug. 3, not just because she looked chic in a sleek black swimsuit. She and Andrea had some wet and wild fun together. The two enjoyed a quick swim in the sea, and in one photo captured by an eagle-eyed paparazzi, Andrea helped Selena into the waters by holding her hands.

This Italian holiday isn’t the first time that Selena and Andrea have spent time together. They worked on the 2016 film, Dubious Battle. They were also spotted together in 2019 in Italy during a birthday trip, and they were spotted again together in 2021.

Selena is currently basking in the glow of turning 30. The singer and actress celebrated her birthday on July 25 and reflected on leaving her twenties in a lengthy Instagram post. “My twenties were a journey through good, hard and beautiful moments that I will never forget. Each of them has shaped me into the person that I am today,” she wrote. “I am someone who is still learning, but is more certain what matters and what she wants. “Someone who is grateful for every single gift and every single lesson along the way. I am walking forward encouraged by so many strong, empowering people around me.”

“After a few days of celebrating, my heart feels full, grateful and I can say that I’m starting to really like 30,” she added. “Thank you SO much for being a part of my life, here’s to another decade! Love you all inside and out so much it hurts!”