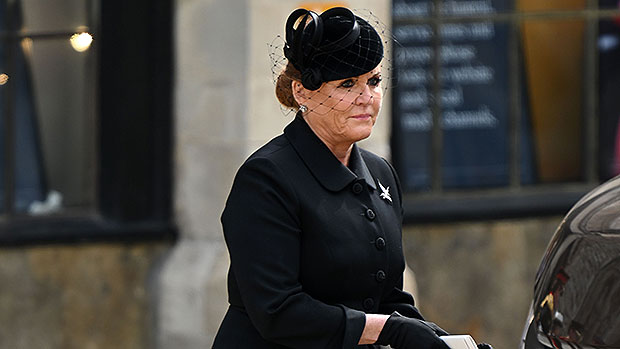 Sarah Ferguson joined a long list of supporters who paid tribute to Lisa Marie Presley during her funeral services on Sunday, January 22, at Graceland in Memphis, Tennessee, which can be viewed here. The former wife of Prince Andrew gave an emotional speech, calling the late star “sissy,” as they had grown close while Lisa Marie was living in Sussex, England, with her ex-husband Michael Lockwood, with whom she shared 14-year-old twin daughters Finley and Harper. “I stand here with great honor because we called each other ‘sissy,’” Sarah began. “I’ve been with [Finley & Harper) for all your lives really and I stand here with great honor.”

The Duchess of York, who famously divorced King Charles III’s younger brother in 1996, went on to reference her late former mother-in-law, Queen Elizabeth II, as she continued her heartbreaking message. “My late mother-in-law once said that nothing can take away the anguish and pain of these moments because grief is the price we pay for love,” Sarah added.

Lisa Marie died from a cardiac arrest at the age of 54 on January 12, 2023, only five months after penning a heartbreaking essay on grief following the death of her only son, Benjamin Keough, who passed away from suicide two years earlier. Lisa Marie’s other daughter, Riley Keough, whom Lisa Marie shared with he ex Danny Keough, along with Ben, was spotted with Lisa Marie’s mother, Priscilla Presley, arriving to the funeral on Sunday.

“We look at Priscilla as a mother to Lisa Marie. We look to Lisa Marie, and say, you lost a son,” Sarah continued in her tribute. “Mothers losing children – there are no words for it. Today we talk about action and action is the way we can go forward. For Riley, for Harper and Finley, and for the entire family, we march forward in support of you – all of us are with you and we will help you as best we can – if you put out your hand you will be there.”

A day before the funeral, Sarah revealed that she believed her good friend had died of a broken heart following the loss of Benjamin, who passed away at the age of 27. “I think she’s with Ben now,” the royal beauty told Page Six on Saturday. “I think we need to make sure Finley, Riley and Harper are fully supported going forward,” she continued. “She was so proud of them, so proud. She used to write to me saying, ‘Yeah, I’m really gushing at how wonderful my children are right now. Also, we’ve got to look after Priscilla now, don’t we?”

Lisa Marie’s Family Is Live-Streaming Her Memorial: How To Watch

Taylor Swift Immerses Herself In Nothing But Purple Water For Dreamy New ‘Lavender Haze’ Video: Watch