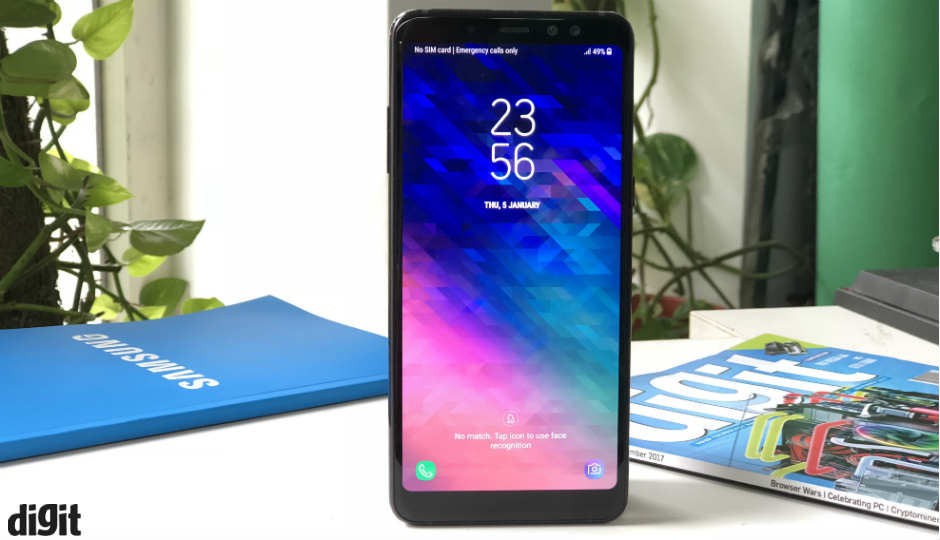 Samsung Galaxy A8 Plus 2018 detailed review

Last year’s Samsung Galaxy A-series, was in some ways a cut-down version of its flagship S-series of the phones. For this year’s first A-series phone, Samsung has kept the core recipe pretty similar to its current flagship (Galaxy S8+). The phone is just as tall, runs on a similar software, is IP68 certified and the infinity display is also here, albeit without the curved front glass. That said, the rest of the smartphone is new and on paper does seem like a really serious competitor for the price. The phone packs an all-new SoC from Samsung’s Exynos range, you get 6GB RAM (which seems plenty) and 64GB storage is still big enough to keep even heavy users happy. So, does the Samsung Galaxy A8 Plus give you enough reasons to consider it in the 30-35K segment? The territory that is currently being heavily contested by the likes of OnePlus 5T and Honor View 10. Let’s find out.

The very first thing you notice about the Samsung Galaxy A8 Plus is the similarity in terms of design and overall build quality to the flagship smartphones from the Samsung stable. Namely the Galaxy S8+ and Note 8. Samsung’s Galaxy A series is about offering flagship class “feel” at lower price points and the Samsung Galaxy A8 Plus does do that very effectively. The phone looks pretty, even though it does not have the same curves we so admire on Samsung’s S-series. It is more grippy than some of its all metal clad counterparts, but the glass back, which gives it the premium feel, can also be a worry in terms of the fragile nature of glass back smartphones. The exterior has no rough edges and the whole device feels quite premium. Samsung has thrown in an IP68 certification as well, which makes the phone dust and water resistant, which makes it one of the few phones at its price to offer that.

We also like the fingerprint position on this phone, which is definitely more convenient then what we got on the S8+. However, the Galaxy A8+ is a tall phone and if you have smaller hands, you will be shuffling the phone to reach it. The larger size and the bigger battery has nudged the weight towards 200 grams (191gm to be exact) and with an 8.3mm thickness, the phone feels heavy and is not the most comfortable for one-handed usage. Samsung has carried forward the side mounted the single speaker. It may look like an odd design choice at first but is actually a clever idea as it avoids the sound from getting muffled.

The 6-inch Super AMOLED panel on the device has an 18.5:9 aspect ratio which offers a resolution of 2220 x 1080 (FHD+). It is a vibrant display, offering good colour saturation, superb contrast ratios with decent sunlight legibility. Being a super AMOLED panel, you get deep blacks and that extra touch of vibrancy that makes colors “pop”. However, you can choose to tone down and tweak the intensity of color via the display settings. The touch response is quite good and the corning gorilla glass provides adequate protection. All-in-all, the display performance is one of the strengths of the device. Having said that, the rather thick side bezels does stick out like a sore thumb, especially when you compare it to the Samsung Galaxy S8 or Note 8. Not a deal breaker, but we just wish the bezels were a wee bit less prominent.

On the A8+ Samsung uses a familiar yet newer version of its ‘Experience” UI. The functionality, tweaks, and tricks are almost identical to what we saw on Samsung’s flagship smartphones (S8 and Note 8) last year. Hence, with the Galaxy A8+, you get the premium software layer, which adds to the overall appeal of the smartphone while clearly distinguishing the A series from the lower ‘J’ and ‘ON’ series of Samsung Galaxy smartphones. When it comes to UI, Samsung has merged its own ecosystem (apps, themes, wallpapers, and services) intertwined with Android 7.1 Nougat, which does add to the overall number of apps that come pre-installed on the phone. Apart from heavy lacing of Samsung apps and services, the fact that the Galaxy A8+ runs on Android Nougat and not the latest Android Oreo, dials down the appeal of the Samsung Galaxy A8+ from a software perspective.

On the brighter side, it is an eye-pleasing UI and equally easy to work with. In addition, the UI does give small tutorials wherever required. You also get ‘Bixby’, Samsung’s own version of a voice assistant. It is available via a swipe from the left, but the whole point of having voice assistant is completely moot here. You can’t talk to Bixby and all it does is to show you cards of some relevant stuff, which you may or may not follow. Besides this, you also get the infamous ‘Face Unlock’ feature, which can only recognise the user in ample lighting and in the same state as the one you registered in. This means, if you registered your image with reading glasses, it won’t recognise you without them.

Core Performance: Not the speediest phone around

On the Samsung Galaxy A8+, you are getting Samsung’s latest Exynos 7885 SoC. This is an octa-core SoC which is running in a 6 core + 2 core setup. It has 2 x ARM Cortex A73 cores running at 2.1GHz and then you have 6 x ARM Cortex A53 cores clocked at 1.6GHz. Here the A53 cores are for efficiency and to take care of all the trivial tasks, the A73 cores are there to take care of the heavy lifting. Based on the 14nm FinFET manufacturing process, the chip is just as power efficient as the last gen Exynos 7880 used on the 2017 Samsung Galaxy A7 and A5 smartphones. It is a good SoC and the phone doesn’t seem slow in terms of daily usage, it’s just that when taxed with a lot of tasks, you might encounter occasional stutter and lag.

The 8 compute units are accompanied by the Mali-G71 GPU, which has been around for quite some now and was also seen on last year’s Kirin 960 SoC, which powers the Honor 8 Pro. You do get 6GB of RAM on this phone which comes in handy if you are a heavy user.

All-in-all the performance is good, but not great and that is where we think the question lies. Do you as a user are okay with just a good enough performance from a phone priced at Rs.32,999? Especially, when Samsung’s own two-year-old Samsung Galaxy S7 beats the A8+ in terms of pure performance. Yes, you get the larger display on the A8+, but the Galaxy S7 has a higher quality 2K Super AMOLED display at its disposal and is now available around the same price.

The phone does not heat up as such but while shooting a video or playing games on it, the back of the phone does get a little warm. The single side-mounted speaker seems fairly loud and the audio quality via the headphones is at par with Samsung’s flagship offerings. You also get the customize the audio output according to your listening tastes from the settings menu.

Battery life: For a day

Regardless of the performance, we are happy with the battery life the phone provides. The 3500mAh battery goes on for a full day quite easily, even if you are a heavy user and like to stream video content for a couple of hours each day. The battery life, however, does deplete quicker when you are gaming on the machine, but that is a given with most phones. We have been using the phone for quite some time now and thus far we have juggled between light and heavy workloads at days, but the phone never died on us. It essentially has a better battery life than any of its primary competitors at the moment.

Talking about competition, THE prime differentiating factor between this phone and its competitors are the cameras. You get a 16MP primary snapper on this phone which is enabled by a f/1.7 aperture. The camera takes good images under ample lighting conditions, with tweaked contrast ratios and higher saturation levels (than normal) to make the image more pleasing. This is a signature trick we have seen on previous Samsung phones as well. At the same time, the camera software has a tendency of over sharpening the image. All of this comes in handy if you are taking a macro shot in bright conditions. The f/1.7 aperture further ensures that you will get a good ‘bokeh’ effect while taking those macro shots.

But when shooting regular images (non-macro), we observed highlight clipping and aggressive oversharpening in some of the images we clicked. Things become worse during the night as the images captured showcase a posterization effect. To remove noise, the camera software uses aggressive noise reduction algorithms, which impacts details and definition. The lack of an OIS is also felt in low light images and you end up taking multiple shots to get that good usable snap.

If you were thinking of getting that shot right in pro mode, you will be disappointed to know that the pro mode on the camera is also quite lackluster. You cannot toggle focus distance or play with aperture settings. The camera software also leaves out filters and a slow-motion mode, which is fast becoming a staple feature for premium smartphones.

The front-facing camera, on the other hand, offers a better image quality in both low and ample lighting conditions. You get two cameras at the front, a 16MP primary unit, which is accompanied by an 8MP unit. The camera captures a decent amount of details in all lighting conditions. The secondary camera is there for Samsung’s Live Focus mode to add the desired amount of background blur (bokeh) to the image.

When we first started using the Samsung Galaxy A8+ (first impressions), we instantly fell for the device. However, as we used it extensively for this review, the notion of it being the more affordable version of the Galaxy A8+ wore off. Don’t get us wrong, the phone looks good, performs well (enough), has good battery life and is well built. However, the sub-par camera quality and the fact that you can get much better phones at the same price, that too even from Samsung itself (the Samsung Galaxy S7) does not help the case. All this puts the Samsung Galaxy A8+ in an awkward situation.

Hence, if you are a Samsung loyalist, the Samsung Galaxy S7 is still a better phone to buy or you can wait for a bit as after the impending launch of the Galaxy S9, prices for the Galaxy S8 and S8+ will eventually drop. And, if you are looking for just a good phone in the 30K to 40K price bracket, the OnePlus 5T or the new Honor V10 are really hard to look past.