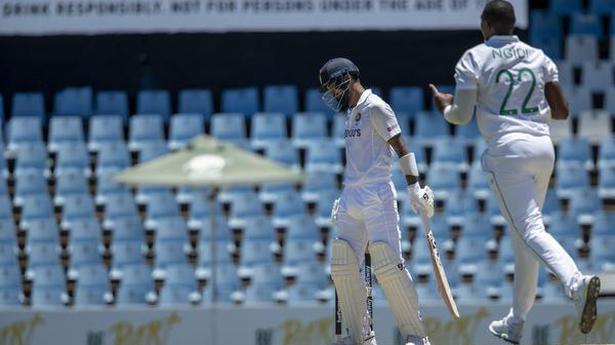 Indian batters slowly and steadily extended their overall lead to 209 despite losing a couple of wickets in the morning session as the visitors reached 79 for 3 at lunch on the penultimate day of the first Test against South Africa here on Wednesday.

Skipper Virat Kohli (18 batting) has Cheteshwar Pujara (12 batting) for company going into the break and any target above 300 set by India could be near-impossible to chase down for this South African line-up.

Pujara was lucky that Kagiso Rabada dropped a dolly off Lungi Ngidi at short mid-wicket but his skipper Kohli looked in control having already hit four boundaries.

The highest-ever successful fourth innings chase at the Centurion was England’s 251 back in the 2000-01 season and for this South African batting line-up that distinctly lacks quality of the bygone era, it would be more than an onerous task to counter Jasprit Bumrah, Mohammed Shami and Mohammed Siraj on this track.

India scored 63 runs in the session and definitely would like to accelerate from here on in order to have at least an hour’s bowling this evening.

The morning session primarily belonged to South Africa as night-watchman Shardul Thakur (10) was snapped in the second slip by Wiaan Mulder off Rabada.

First innings centurion KL Rahul (23 off 74 balls) showed admirable patience during the first hour leaving a lot of deliveries outside the off-stump before Ngidi softened him up with one that came in sharply, hitting him on the knuckle.

A close look showed considerable swelling and Rahul needed medical treatment and there was a lapse of concentration as he fished at one outside the off-stump before skipper Dean Elgar at first slip took an overhead catch.

Kohli looked in control during the time he was at the crease before lunch as he rode on top of the bounce to pepper the off-side field on a couple of occasions.

Pujara also grew in confidence and played a rasping square cut to signal his positive intent.