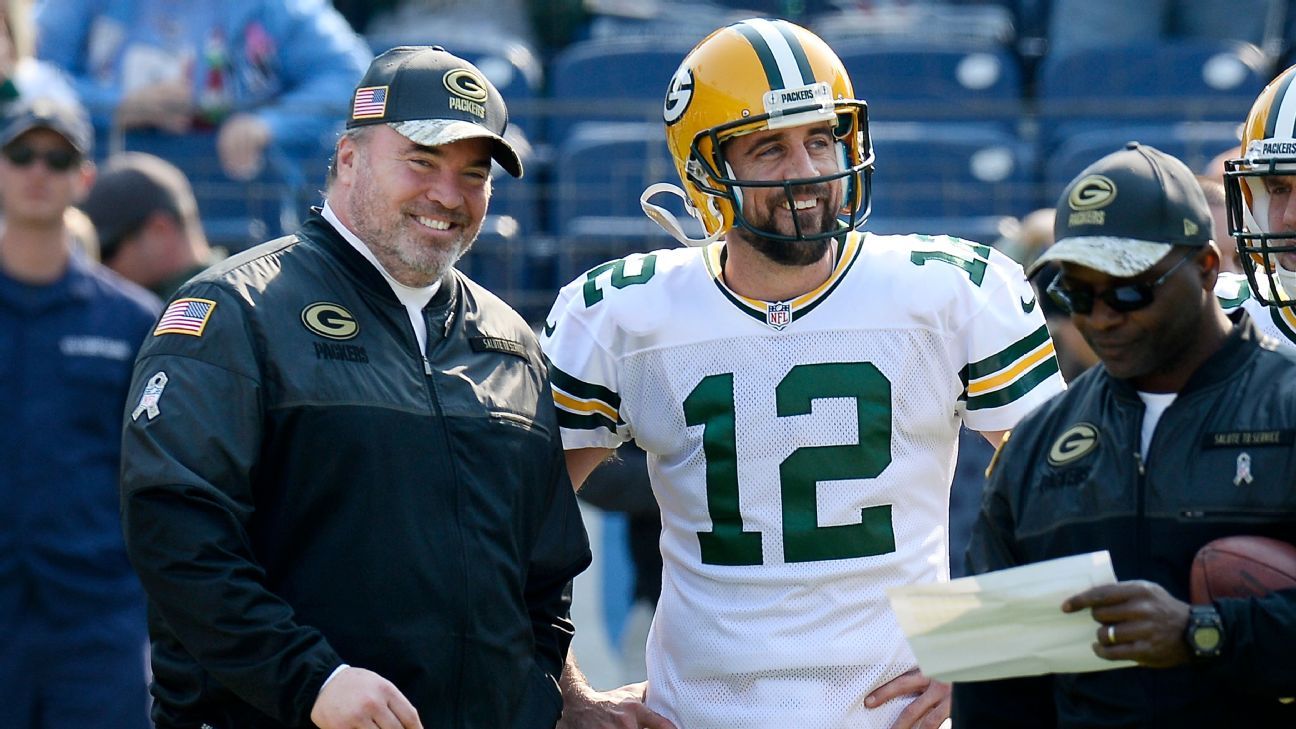 GREEN BAY, Wis. — All Aaron Rodgers talked about Wednesday were the good times and fond memories he had during his 12-plus seasons with Mike McCarthy as the Green Bay Packers‘ coach.

Rodgers said their relationship has continued even though McCarthy is in his third season as the coach of the Dallas Cowboys, who come to Lambeau Field on Sunday. It will be McCarthy’s first game against his former team.

“We’ve always kind of been in touch, a little bit more I’d say the last year or so,” Rodgers said during a session with reporters that was dominated by questions about his former coach.

“I think as time goes by, the gratitude for that time as you look back on the journey of your career goes up a little bit. I appreciate the little things a little bit more because really this game and life is about the journey. I’ll always be tied with him because of the connection that we had and the years we spent together. Obviously my longest-tenured coach, my longest-tenured play-caller. I’m thankful for those years and thankful maybe a little bit more now as the years go by.”

McCarthy was not the Packers’ coach when they drafted Rodgers in 2005. In fact, McCarthy was part of the coaching staff with the San Francisco 49ers team that picked Alex Smith at No. 1 overall instead of Rodgers. McCarthy was hired as the Packers’ head coach the next offseason and helped develop Rodgers while he sat behind Brett Favre.

They were together until McCarthy was fired with four games left in the 2018 season. In between, they won Super Bowl XLV, and Rodgers won his first two NFL MVPs.

There were some rocky moments, too, like when McCarthy moved on from quarterbacks coach Alex Van Pelt after the 2017 season and Rodgers said the move was made “without consulting me.” And then there was the 2018 postgame news conference after a 22-0 win over the Bills during which Rodgers came out in criticism of the offense and the playcalling.

“It’s probably normal in any relationship you have, when you’re able to take time away and you have that separation, it’s natural to look back and have a greater sense of appreciation and gratitude and thankfulness for that time,” Rodgers said.

“I think it’s normal to be able to think about the things you really loved about that relationship, that style or that program and just contemplate on how special some of those moments were, how the journey is really the most important thing and the ups and downs. I’m thankful for the incredible moments, the highs we had, and there were many of them, and even for the low moments too because it gives you perspective on life. Life is not all about the beautiful ups. It’s the downs that you learn the most lessons in.”

Rodgers said Tuesday on “The Pat McAfee Show” that he hopes the reception from the crowd at Lambeau Field is “as warm as it needs to be.”

He also said he saw McCarthy get choked up at his news conference on Monday when he talked about Green Bay.

“Mike’s Pittsburgh toughness and grit on the outside and a big soft teddy bear on the inside,” Rodgers said. “I think that’s a great combination to have. There were definitely some tears over the years, both in team settings and also in one-on-one settings. Him and I definitely shed some tears over the years together in conversations, usually happy tears I would say. But yeah, Mike’s a big-hearted guy, and I like to see him let the emotions come out.”