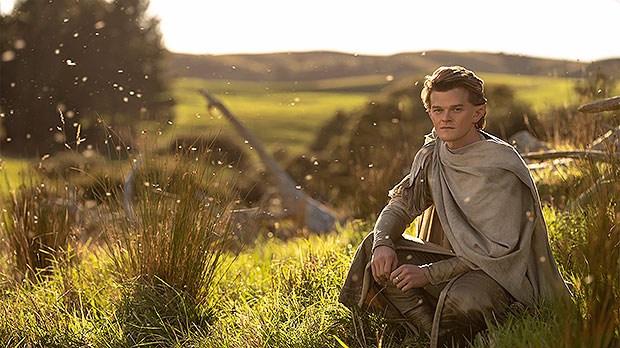 The Lord of the Rings: The Rings of Power features a stellar ensemble cast, which includes Robert Aramayo. The 30-year-old British actor stars as one of the most important Lord of the Rings characters in the new Prime Video series premiering on September 2.

More ‘Lord of the Rings’ News:

You might be wondering: who is Robert Aramayo? If you like Game of Thrones, you’ve definitely seen him before. From his pivotal Game of Thrones role to his background, here’s what you need to know about The Rings of Power breakout star.

1. Robert plays Elrond in The Rings of Power.

Robert has the key role of Elrond in The Lord of the Rings: The Rings of Power. The role was previously played by Hugo Weaving in The Lord of the Rings films. Elrod is a half-elf who is writing speeches for the elven king when the show premieres. Robert hinted that the series will explore the complicated family dynamics Elrond is dealing with. “He’s got a complicated relationship with his dad, with what he achieved. His dad saved the world, his mum saved the world, his brother created Númenor. It’s a lot of pressure on young Elrond,” Robert told Variety.

This isn’t Robert’s first go-round with a wildly popular fandom. He notably played young Ned Stark in 4 episodes of Game of Thrones. He was featured in flashbacks that revealed that Jon Snow was the son of Rhaegar Targaryen and Lyanna Stark.

3. Robert worked on farms while in New Zealand.

Robert had to stay in New Zealand during the pandemic lockdown as The Rings of Power filming got underway. Over the course of his time there, Robert admitted to Variety that he “hitchhiked and took buses. I worked on some farms, met some really interesting, cool people.” On the farms, he would carry hay stacks, dig holes, and more.

4. Robert grew up in England.

The actor was born in Kingston upon Hull, England, which is a port city in East Yorkshire, England. He is also of Spanish descent.

Robert has a Bachelor of Fine Arts from the Julliard School in New York City. His first film role was in Lost In Florence. In addition to Game of Thrones and The Rings of Power, Robert has had roles in shows like Behind Her Eyes and Mindhunter.