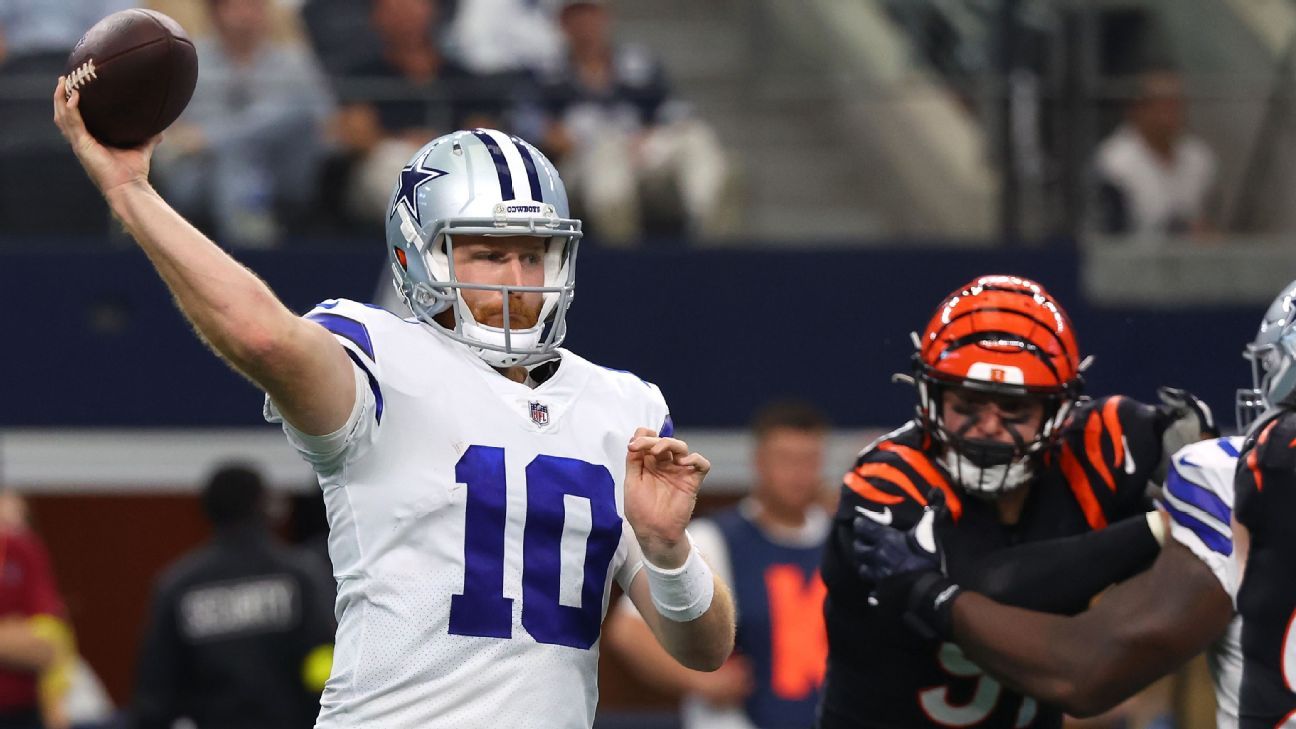 ARLINGTON, Texas — Cooper Rush isn’t one to show his emotions much publicly, and he wasn’t about to break character after Sunday’s 20-17 win against the Cincinnati Bengals in which the Dallas Cowboys quarterback led a final-minute drive that ended in a game-winning 50-yard field goal.

“Winning an NFL game is a lot of fun,” Rush said.

Making just his second career start, Rush completed 19 of 31 passes for 235 yards and a first-quarter touchdown pass to Noah Brown while filling in for an injured Dak Prescott, who had right thumb surgery the day after the season-opening loss to the Tampa Bay Buccaneers.

Last October, with Prescott sidelined because of a calf strain, Rush completed 25 of 40 passes for 325 yards with two touchdown passes, including the game winner to Amari Cooper with 51 seconds to play to beat the Minnesota Vikings, 20-16.

“You just want to do your job, trust your teammates,” Rush said.

According to ESPN Stats & Information research, Rush became the fifth quarterback since 1966 to lead a game-winning drive in the fourth quarter or overtime of his first two career starts. The others? Houston’s T.J. Yates (2011), Seattle’s Jon Kitna (2007-08), Minnesota’s Wade Wilson (1983-84) and Chicago’s Virgil Carter (1968).

Last year, the Cowboys were 5-1 when Rush made his first start. This year, the loss to the Buccaneers was stinging, especially for an offense that did not get inside the Tampa Bay 30. It was made worse when it was revealed Prescott suffered a fractured thumb that would knock him out for multiple weeks.

Even owner and general manager Jerry Jones knew how big Sunday’s win was, for the Cowboys and Rush.

“Anybody knows how disappointing our first loss was last week,” Jones said. “We could point to the reasons why but that’s not enough. But to come out here with our same home crowd and beat a really fine young quarterback and beat a team that was playing in the Super Bowl just a few months ago, that’s a big tonic for the disappointment we had. And we all know how tough these games are that we’ve got coming up, but the main thing is kudos to Cooper Rush. That shows me so much about him and the principle of he kept a workmanlike basis. He’s done that. He’s gotten better. He knows this offense as well as anybody breathing and he stepped out there and did some great execution.”

After directing touchdown drives on the Dallas’ first two possessions and accumulating 150 yards on offense, the Rush-led offense had just 159 yards on the next seven drives, but with 57 seconds left in regulation and the score tied, the Cowboys answered.

Rush doesn’t remember anything specifically that he said before the final drive.

“It was probably, ‘Let’s go. Here we go. This is why we do it. This is our time,'” Rush said. “Those guys, it’s a fun group, a good group, tons of leaders all over the place. Not everyone needs to get hyped up. They know their jobs. They know what to do, and you just go play ball.”

The only pass attempt Rush did not complete on the final drive was a spike to kill the clock with three seconds remaining. He opened the drive with an 8-yard completion to CeeDee Lamb, which was followed by Brown’s diving 12-yard catch off a tipped pass. Lamb caught a 10-yarder to get the Cowboys to the Cincinnati 32.

After a 3-yard run by Tony Pollard, the clock ticked down, yet unlike in the wild-card loss to the San Francisco 49ers last January, the Cowboys were able to align themselves in time for Rush’s spike, and Brett Maher won the game with a 50-yard field goal as time expired.

“That was a big one for us,” Rush said. “You don’t want to fall down 0-2. Need that first win. Defense obviously kept us in it tonight and Brett at the end doing his job.”

And Rush did his, although Jones said a loss would not have altered the Cowboys’ plan for Prescott’s return.

“When [Prescott] has strength, which I have no idea when that will be, but it will be not an issue of being concerned about reinjuring the thumb,” Jones said. “It will be an issue of his ability to grip the ball, and you know Dak, he’s beat every timeline I’ve ever seen or looked at. So he’s got a good chance to do it, but there’s no question that we didn’t put him on IR. I want to be real clear about that — we did not put him on [IR], so he could be working during these weeks. He could be out there, throwing, [and] certainly involved in everything else. He couldn’t have done that had we put him there. I certainly would look to hope that he just might be available, but I’m telling you, this performance out here today by Rush sure takes a lot of the angst out of that.”