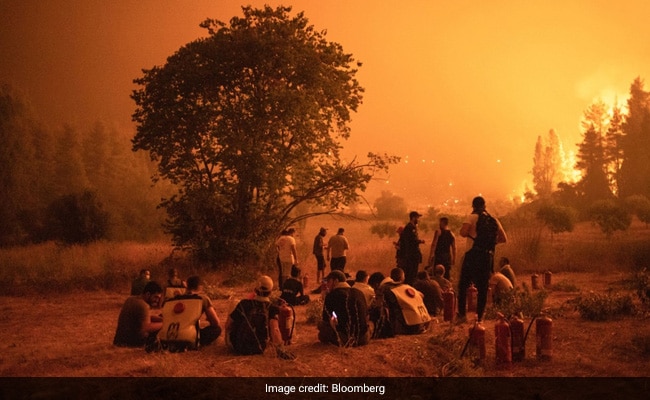 Residents watch the wildfire and support firefighters on Evia island, Greece, on August 9, 2021

The international goal to limit global heating to 1.5 Degrees Celsius (2.7 Degrees Fahrenheit) is officially on life support. A United Nations-backed panel of climate scientists warned in a new report released Monday that the world may be on track to warm by more than 3 Degrees Celsius – twice the Paris Agreement target -in a change that would painfully remake societies and life on the planet.

The latest report from the Intergovernmental Panel on Climate Change comes after years of net-zero pledges by national governments, cities, businesses and investors, and it sounds a stark warning on the still-unchecked emissions of greenhouse gas emissions pushing to record levels. The focus of this report, the third released since August 2021, is on humanity’s vast arsenal of technology, know-how and wealth that remain insufficiently deployed in efforts to ensure a livable climate in the future.

Time to limit warming is perilously short. Greenhouse gas pollution must peak “at the latest before 2025” to keep targets alive, the IPCC scientists write. Based on national pledges made before last November’s Glasgow climate negotiations, emissions in 2030 “would make it likely that warming will exceed 1.5 Degrees Celsius during the 21st century,” the authors conclude. That puts the loss of the first goal of the Paris Agreement within the lifetimes of many people now alive.

“This is not fiction or exaggeration,” said UN Secretary General Antonio Guterres in a statement. “It is what science tells us will result from our current energy policies.”

As bad as that sounds, scientists in recent years have reduced the likelihood of much higher increases, and the report makes clear that solutions are available or foreseeable in virtually every sector:

The report’s parade of numbers shows just how far away countries are from adequately addressing climate change. Greenhouse-gas emissions in 2019 peaked at a new high of 59 billion metric tons. Carbon emissions from 2010 to 2019 are equivalent to about 80% of all the remaining room in the 1.5 Degrees Celsius “carbon budget,” an accounting that scientists use to estimate how much more pollution the atmosphere can stand without heating up past the Paris Agreement’s limits of 1.5 Degrees Celsius or 2 Degrees Celsius. The intensity of emissions, or the energy use per GDP, fell 2% in the last decade, but that gain was overwhelmed by increased GHG pollution.

Emissions from existing fossil-fuel infrastructure alone would push the climate beyond the Paris Agreement’s lower bar, compounding effects already plain with 1.1 Degrees Celsius of warming above the pre-industrial average. Avoiding that fate, the scientists conclude, means stranding trillions of dollars in plans and infrastructure too dangerous to continue operating, unless technology emerges to capture and dispense with their emissions.

A peak in global emissions before 2025 would require more upfront investment and a faster pace of change than a later peak “but bring long-term gains for the economy,” on top of the benefits of climate damage that was avoided, the authors wrote. As it stands, financing for strategies to prevent climate change must grow three to six times above its current level to keep the 1.5 Degrees Celsius goal in play.

Policy is not helping as much as it could. Only 53% of emissions fall under climate laws, and just 20% fall under carbon pricing regimes of some kind – approaches that “have been insufficient to achieve deep reductions,” the report states.

In its landmark 2018 special report on 1.5 Degrees Celsius of heating, the IPCC found that to have an even chance of staying below the target, the world needed to halve 2010 emission levels by 2030 and eliminate them by 2050. This prompted the “net-zero by 2050” pledges now common among governments, companies and investors. The new report updates those figures, saying that all greenhouse gasses, not just CO2, must fall 43% below their 2019 levels by 2030 and 84% by 2050. For a two-thirds probability of meeting the Paris Agreement’s higher limit of 2 Degrees Celsius, all gases would have to be cut 27% below 2019 levels by 2030 and 63% by 2050.

Methane, the second most influential gas after CO2, has to fall substantially and soon. While it’s difficult to eradicate from agriculture, relatively low-cost fixes to leaky fossil-fuel infrastructure – itself 6% of global emissions – could wipe out a substantial portion of pollution from those sources.

The 1.5 Degrees Celsius or even 2 Degrees Celsius limits will be increasingly challenging without what scientists call “overshoot,” or surpassing the temperature limit and then clawing back down through a combination of forest regrowth and restoration, and emerging carbon-removal (CDR) technologies that are “unavoidable” for a path to net-zero. To fall back below the 1.5 Degrees Celsius target by 2100, the IPCC wrote, practices and policies – many of them still embryonic – would have to draw down almost a decade of CO2 emissions, according to scenarios that “are subject to increased feasibility concerns,” they said.

Differences between the preliminary Summary for Policymakers and the report reveal how negotiations among diplomats change scientists’ underlying conclusions. “The interaction between politics, economics and power relationships is central to explaining why broad commitments do not always translate to urgent action,” the scientists write in their Technical Summary.

The report’s wording of fossil fuel use is in many places heavily caveated by language suggesting technologies that capture CO2 pollution and store it underground, under the ocean or in manufactured goods can allow otherwise polluting infrastructure to continue to exist. Coal, oil and gas use without carbon capture and storage must fall 100%, 60% and 70% below 2019 levels by 2050. “Depending on its availability, CCS could allow fossil fuels to be used for longer, reducing stranded assets” that could otherwise total up to $4 trillion in a 2 Degrees Celsius scenario.

In their Technical Summary, scientists cite a study estimating nearly $12 trillion in stranded fossil-fuel assets by 2050, with another decade of delayed mitigation adding almost $8 trillion. They write elsewhere that since their last report it’s become clear that “small-scale technologies (e.g., solar, batteries) tend to improve faster and be adopted more quickly than large-scale technologies,” such as nuclear power or CCS.

The report is the third of four installments that make up the largely volunteer scientific group’s sixth global reckoning since 1990. Focused on prevention – or “mitigation” in the jargon – the report is the IPCC’s most elaborate description yet of how aggressive systemic change must be to transform how civilization powers, moves, feeds and houses itself.

The report highlights the many ways that cutting emissions would also help improve development prospects for billions of people. A new chapter explores how much progress can be made from lowering demand for carbon-heavy lifestyles. The 10% of households responsible for the most carbon output are responsible for about 40% of the world’s total. The bottom 50% of emitters put out only 14% of the total. Emissions track wealth very closely, which is why, for example, the least developed countries put out just 0.4% of historical emissions from fossil-fuel use and 41% of the world’s population emit less than 3 tons of CO2-equivalent a year, or roughly half the global average.

Falling demand – including technology and behavioral changes and cultural change – can cut all emissions in key sectors by 40% to 70% by 2050, compared with national policies and commitments made through 2020. These approaches “are consistent with improving basic wellbeing for all.” Many of the steps taken to cut emissions will also reduce air pollution, improve access to water and redistribute wealth. The route to a less warm world is also the creation of a generally better one.