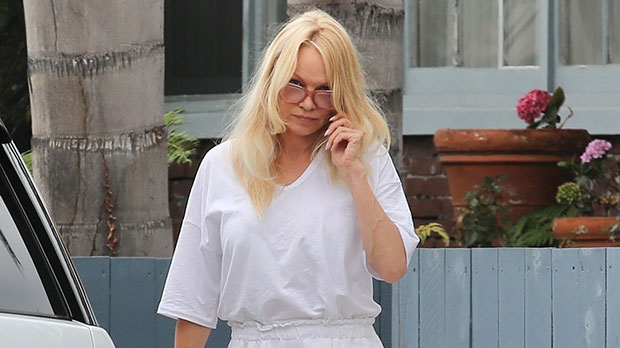 Bow down to the queen! Pamela Anderson can’t help but steal the spotlight when she steps out and that is exactly what happened when the Baywatch icon got some retail therapy in on Friday, September 2. Taking over the streets of Venice, CA, the 55-year-old stunner rocked an all-white ensemble and blinged it out with a pair of Crocs x Balenciaga mules.

Pamela is clearly living her best life after getting rave reviews her Broadway debut playing Roxie in the musical Chicago. A source EXCLUSIVELY told HollywoodLife that Pamela was “crying happy tears” from the positive feedback, especially after being so “nervous” about performing in her first acting gig since 2019.

“Pamela is reading the reviews today and she is super emotional because of how favorable the critics are to her performance,” the insider began. “She’s been talking to her friends and crying happy tears because of how much this means to her. She put her heart and soul into this and, although she was nervous before going on stage during last night’s opening, she was also very excited to finally get a chance to show the world what she is truly capable of.”

The source went on to say that the first night audience included her closest friends and her two sons, Brandon Thomas Lee and Dylan Jagger Lee, whom she shares with ex Tommy Lee. All the love and support has allowed Pamela to focus on the near future. “Now that the first-night jitters are out of the way and the reviews are amazing, Pamela is going to let her creativity shine and showcase her talent more than ever,” added the insider.

Just days before she hit the stage, Pamela gushed about the chance to play the iconic role of Roxie, which gave Renee Zellweger an Oscar nom for the film version in 2002. “I feel like I’ve got all these arms around me, and I feel very embraced, very supported, very rooted for. It’s a new feeling!” she told The View. “When you believe in yourself, other people start believing in you too. It’s a cliché thing to say, but as soon as I decided I’m good enough, then all this stuff just started happening. It’s like miracle to miracle. I’ve gone from Baywatch to Broadway.”

Pamela Anderson’s Kids: Everything To Know About Her 2 Sons