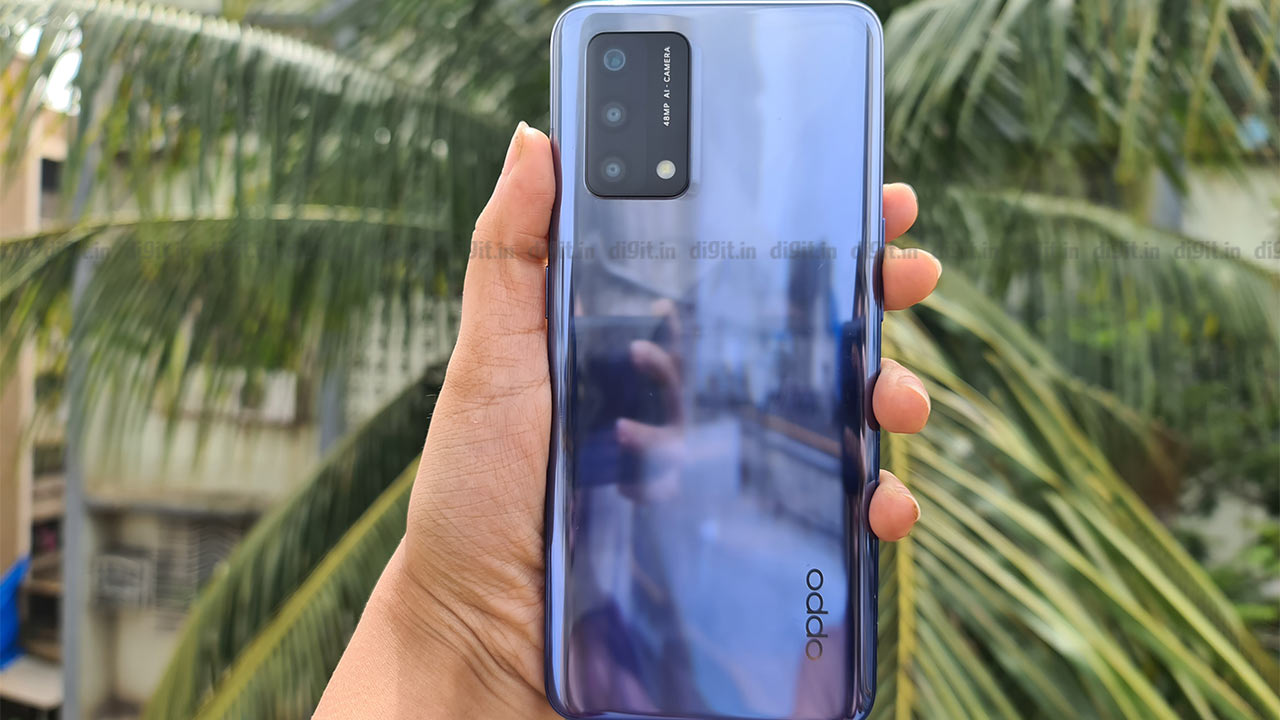 Oppo is becoming increasingly present in the mid-range smartphone segment, offering up some interesting and eye-catching phones in this year alone. We reviewed the Oppo F19 Pro+ 5G this year and found it to be a pretty good option for those looking for an aesthetically pleasing 5G smartphone with a capable camera and long battery life. This time around, we have the Oppo F19, the third device launched in the company’s F19 series of smartphones. The Oppo F19 brings with it some pretty interesting attributes such as a large battery, an AMOLED display, an in-display fingerprint sensor, 33W fast charging support, and others, at a pretty aggressive price point. However, the competition in the sub 20K price range is absolutely ferocious, so it will be interesting to see if the Oppo F19 manages to stand out despite excellent offerings from companies such as Xiaomi, Samsung and Realme. Let’s delve deeper into the review to find out.

The Oppo F19 definitely borrows design elements from its more expensive siblings in the F19 series of phones. The phone is available in three colours – Space Silver, Midnight Blue, and Prism Black. We got the Midnight Blue variant for review and while the colour looked fantastic, the glossy glass rear panel is an absolute fingerprint magnet. Nevertheless, the light-refracting finish on the rear panel is sure to turn a few heads. The phone is also extremely lightweight and thin, making it feel more premium than its price tag when it comes to looks alone.

The back also houses a small Oppo logo, tucked away in the bottom left corner of the device, and a vertically-placed back camera module that juts out a bit. As for the ports and buttons, the Oppo F19 has a USB Type C port at the bottom alongside the phone’s speaker and 3.5mm audio jack. On the right, you have the power button, while the volume buttons are positioned on the left side, next to the SIM tray. This is quite unusual since most phones today come with both the power and volume buttons on one side, usually the right, and frankly, we prefer that over the F19’s design. The buttons are pretty clicky and tactile, nevertheless. The SIM tray accommodates two SIM cards and a microSD card. The phone also has an in-display optical fingerprint sensor, which is not something we see very often at this price point. We’d also like to mention that the company has thrown in a pair of earphones in the box, a rarity these days.

Now, coming to the display, the Oppo F19 sports a 6.43-inch AMOLED display with Full HD+ resolution, but no fast refresh rate support. This is disappointing since the Redmi Note 10 Pro Max, despite being price similarly, comes with an AMOLED display with 120Hz refresh rate support. So, the Redmi Note 10 Pro Max is definitely a better proposition in this aspect when compared to the Oppo F19. The touch response of the device is pretty sluggish, for the most part, but is ramped up to 180Hz when in Game Mode.

The display also houses a small punch-hole cut-out for the selfie camera that is tucked neatly in the top-right corner of the phone. The display is bright and vibrant that makes watching content a pleasure. We recorded a maximum brightness of 591 nits and minimum brightness of 2 nits. So, it’s safe to say that the display is pretty bright in most lighting conditions, except in harsh sunlight, where it is slightly harder to read. The colours aren’t the most accurate and are a bit too saturated, in our opinion. Overall, the display is a solid one to consume content on, but if you’re looking for snappiness, you may be better off with the Redmi Note 10 Pro Max or the Realme 8 Pro that come with fast refresh rate support.

While the Oppo F19 has a commendable design and a good display, the same cannot be said for its hardware under the hood. The phone is powered by the Qualcomm Snapdragon 662 SoC, which is pretty dated at this point and is usually used in phones under 15K, so it doesn’t inspire much confidence in its abilities. The phone comes with 6GB RAM and 128GB onboard storage. We ran a plethora of benchmarks on the phone and some of the results can be seen in the graphs below in comparison to the phone’s strongest competitors.

Moving on to GPU tests, the Oppo F19’s shortcomings in performance continued being highlighted with the phone scoring a mere 383 in 3D Mark Wild Life. In contrast, the Redmi Note 10 Pro Max scored a whopping 1109 and the Realme 8 Pro scored an impressive 1047 in the same test! We saw this in GFX Bench too, with the Oppo F19 scoring much lower than the aforementioned competing devices here as well.

Now, we also played Call of Duty: Mobile and Asphalt 9 Legends on the device and used Gamebench to score the gaming performance of the device. In Call of Duty Mobile, the Oppo F19 managed to hit a median FPS of 43 with 77 per cent stability at high graphics, while in Asphalt 9, the phone managed a median FPS of 29 at 80 per cent stability. These are pretty poor numbers in comparison to the Note 10 Pro Max, Realme 8 Pro, and even the cheaper Realme Narzo 30 Pro. However, if you set the graphics to Medium in Call of Duty or Auto in Asphalt 9, the game runs visibility smoother with minimal heating. The phone does decently well in light day to day tasks such as texting and calling, but it is definitely sluggish when it comes to multitasking and app opening. Overall, the performance of the phone is not up to the mark in comparison to what its competitors are offering and we wouldn’t recommend this phone to avid mobile gamers.

Moving on to the software, the Oppo F19 runs on ColorOS 11.1 based on Android 11. The UI looks simple and clean, but it, unfortunately, comes packed with a ton of bloatware. You can delete some of this bloatware, but most of the Oppo apps including Hot Apps, HeyTap Cloud, Tips, and others, cannot be removed.

The Oppo F19 comes with a triple camera setup including a primary 48MP camera combined with a 2MP macro shooter and a 2MP depth sensor. The phone misses out on an ultrawide lens, which is disappointing in this price range. The primary lens shoots decent photos in daylight with good colours and an acceptable dynamic range. The shadows are crushed in most photos though and darker areas in the photo lose out on detail. In low light situations, the camera produces grainy, noise-filled images that aren’t something we’d deem social media-worthy in the least.

Night mode definitely brightens up low light shots considerably but the noise is still present. Low light selfies are also grainy and low on detail. However, in daylight, selfies usually come out looking pretty good, if you turn off all the beauty filters applied by default. The macro lens is capable of some semi-decent shots, but the colours don’t look great in this mode.

Portrait photography on the Oppo F19 is decent, with acceptable edge detection, for the most part. The 48MP lens also has some good natural background blur without portrait mode that allows for some good-looking close-up shots. Videos shot on the photo in daylight are pretty decent, but at night, there’s a fair bit of stuttering and noise in the videos. Overall, the cameras on the Oppo F19 are mediocre, at best, for the sub-20K price segment.

Despite being a sleek and lightweight phone, the Oppo F19 actually houses a pretty ginormous 5,000mAh battery. The phone will easily last most users an entire day. However, the Snapdragon 662 chipset is not the most energy-efficient, so you’ll see the phone’s battery draining faster than competitors with more power-efficient chipsets and the same battery capacity. If you’re a heavy gamer, you should see the phone last up to 7 hours. In our battery tests, the phone’s battery dropped by 7 per cent with one hour of GPS navigation and by 5 per cent with 15 minutes of playing Call of Duty: Mobile. In our video loop test, the phone went from 100 per cent to empty in about 16 hours.

The Oppo F19 comes bundled with a 33W fast charger that can help users power the device in a pinch. The phone goes from zero to full in a little over an hour.

At Rs 17,990 at the time of writing, the Oppo F19 definitely has a few things going for it. You get a sleek, aesthetically pleasing design with an AMOLED display, an in-display fingerprint sensor, and 33W fast charging support. However, the device falls short when compared to its competitors in the performance and camera departments, arguably, two of the most important aspects when considering buying a new phone. The only users we could wholeheartedly recommend this device are those who use their phone for basic tasks such as calling, texting, and social media browsing. If you’re a light user and want a good-looking smartphone with decent battery life, the Oppo F19 could be a decent option for you. If not, you’re better off looking at alternatives such as the Redmi Note 10 Pro Max and the Realme 8 Pro.