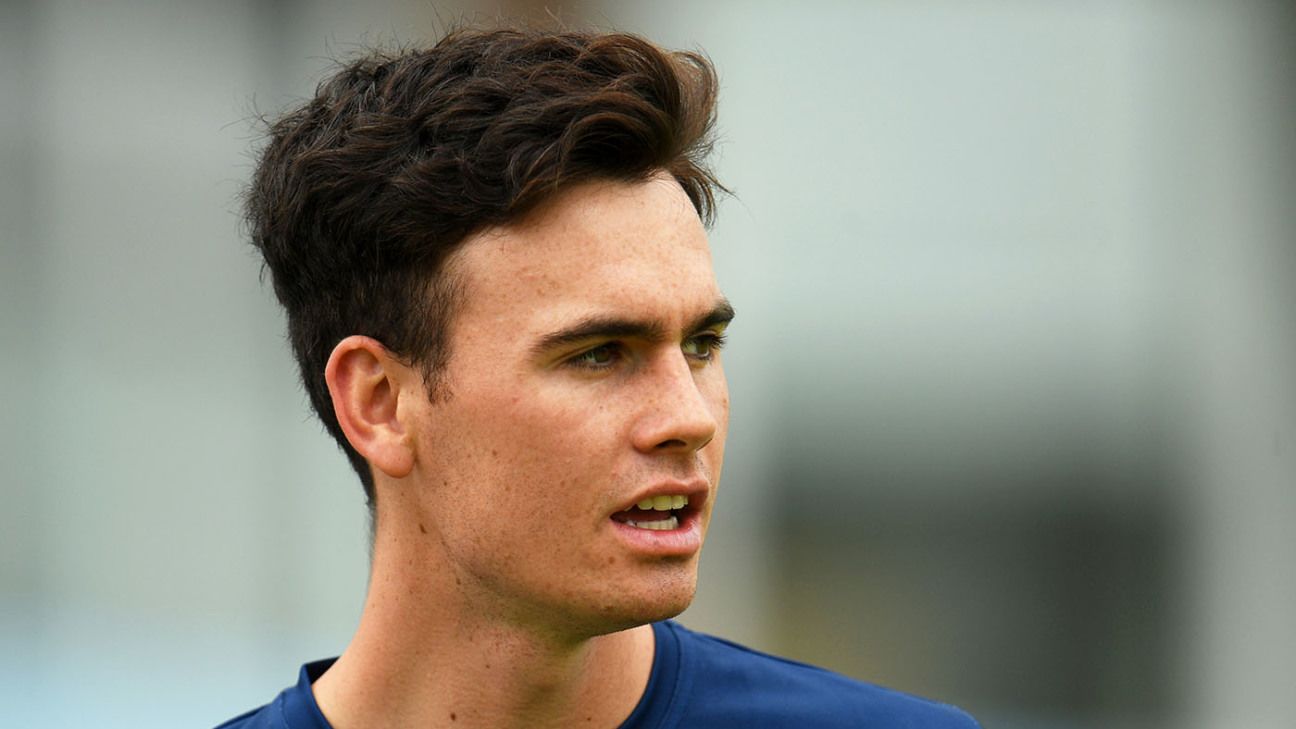 Kent seamer Nathan Gilchrist recorded his best List A figures of 5 for 45 as the Spitfires finally broke their Royal London Cup duck with a 21-run victory against Middlesex.
Gilchrist’s opening burst wrecked Middlesex’s top order at Radlett, while off-spinner Hamidullah Qadri returned 3 for 47 to ensure the home side were bowled out for 196.
Half-centuries by Marcus O’Riordan – who reached that landmark for the first time in List A cricket – and George Munsey enabled the Spitfires to post 217 for 9 after rain reduced the contest to 35 overs apiece.

Middlesex slid to 49 for 4 in reply and a valiant partnership of 57 from 44 balls between Josh de Caires and James Harris was not enough to complete the fightback.

The game eventually began just after 1pm and Kent, having lost the toss, quickly found themselves in trouble at 7 for 2.

Harris nipped one through to bowl Tawanda Muyeye first ball, while Ethan Bamber trapped Ollie Robinson lbw before the pugnacious Munsey and Jack Leaning rebuilt with a stand of 86 from 84.

Munsey cashed in outside his off stump, dispatching both Middlesex’s opening bowlers for successive boundaries as he reached 49 before grinding to a halt while wickets fell at the other end.

Leaning was bowled swinging across the line at Thilan Walallawita, while De Caires collected his maiden first-class wicket when Harry Finch pulled him into the hands of deep square leg.

Nineteen-year-old debutant Toby Greatwood matched that feat, finding Munsey’s outside edge to remove him for 59 and following up with the wicket of Grant Stewart to finish with two for 30.

O’Riordan took up the baton for the Spitfires, clubbing Martin Andersson for three leg-side fours as he added an invaluable 69 from 58 with Qadri, who hit an unbeaten 35.

O’Riordan was eventually run out for 60, attempting an ambitious second to long leg before Bamber picked up two late wickets in as many balls, returning three for 41.

Middlesex got off to a shaky start in pursuit of the target, with the in-form Stephen Eskinazi pulling Stewart’s fifth delivery straight to deep square leg.

Varun Chopra nudged the seamer to slip and Middlesex skipper Peter Handscomb – who had started with a lively 17 from 10 balls – was adjudged lbw before Robbie White fell in the same fashion soon afterwards.

Max Holden batted solidly for 32 before he was bowled around his legs by Qadri, but Harris kept Middlesex in the frame, hitting a six and five fours in his brisk 34 until Matt Quinn had him caught behind.

Qadri collected the wicket of De Caires for 43 and also took a diving catch on the boundary to dismiss Walallawita before Bamber holed out to complete Gilchrist’s five-wicket haul.