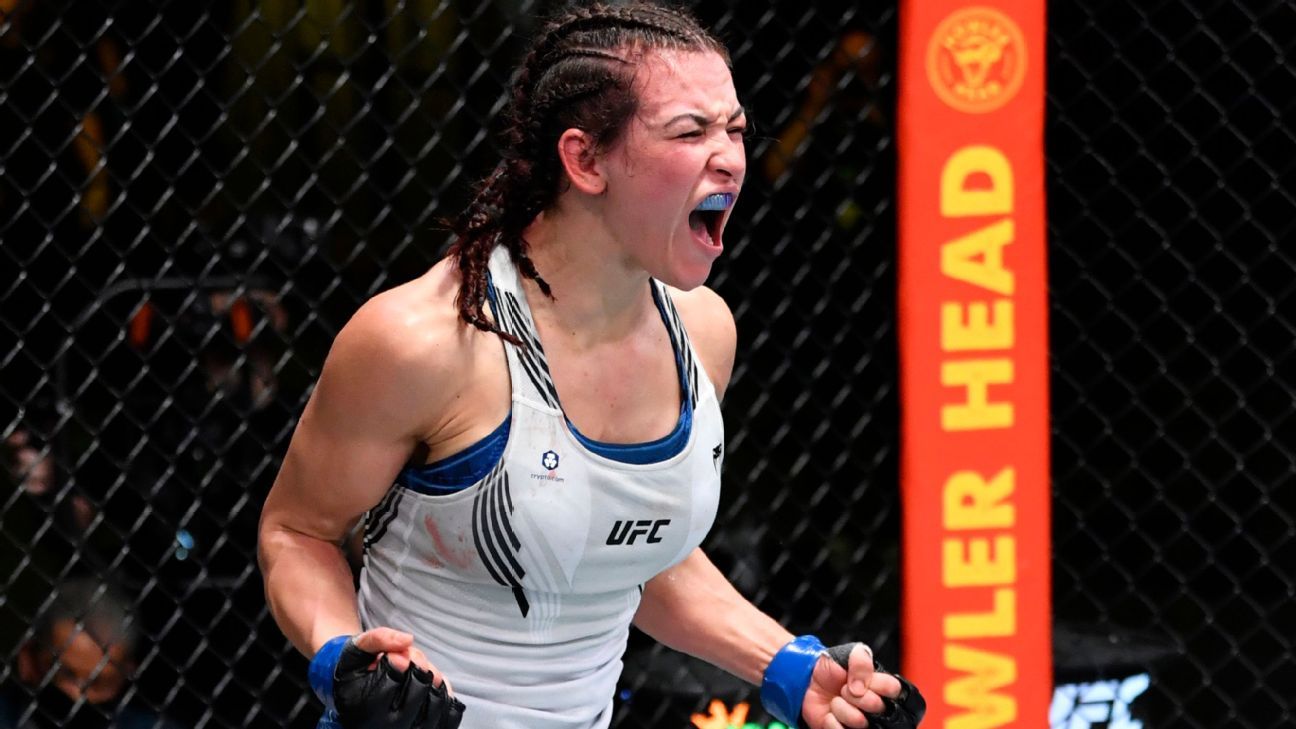 Miesha Tate reached out to UFC president Dana White in the summer of 2020. Tate and her husband, Johnny Nunez, had just had their second child, Daxton, and Tate was contemplating a comeback to the Octagon.

At the time, Tate and Nunez were living in Singapore. Tate was working in an office role for Asia-based One Championship, and Nunez was fighting for that MMA promotion. But COVID-19 restrictions were making things difficult for the young family and they were planning on moving back home to Las Vegas.

With those thoughts in mind, Tate sent White a message on Instagram asking what the UFC boss thought about her — the former UFC women’s bantamweight champion — returning to competition for the first time since 2016. White saw the message, Tate said. But he never responded.

“He totally ghosted me,” Tate said with a laugh.

Miesha Tate, the former women’s bantamweight champion, looks to get back to the top 10 when she faces Ketlen Vieira, ranked eighth by ESPN.

Despite the lack of communication from White, Tate and Nunez went forward with their move back to the United States. Tate returned to Vegas with Daxton and their daughter, Amaia, that September. And in early 2021, Tate took things a step further with the UFC. She showed up unannounced to White’s office.

This time, he had no choice but to listen to her pitch. Tate said that White was hesitant at first, but a few weeks later she was booked for a return bout against Marion Reneau. Tate won by third-round TKO — her first knockout in the UFC. “Cupcake,” one of the most popular women to ever set foot in the cage, was back.

On Saturday, Tate will take the next step on her comeback tour against Ketlen Vieira in the main event of UFC Fight Night in Las Vegas (3 p.m. on ESPN+). ESPN ranks Vieira No. 8 in the world at women’s bantamweight. Tate, 35, is hoping a rehauled training regimen and renewed mindset will help vault her into a historic 2022.

Play for a chance to win a streaming of UFC 269 for FREE! Make Your Picks

The goals Tate has for next year are lofty ones: a title shot against Amanda Nunes, a title defense against former champion Holly Holm and a dream third fight against her heated rival, Ronda Rousey. Nunes has been the UFC women’s bantamweight champion since she choked out Tate to win the belt at UFC 200 in July 2016. Tate retired four months later.

The TKO over Reneau, who had never been finished before, and Tate’s acceptance of the fight against Vieira should be seen as a statement, Nunez said. Tate isn’t back in the UFC just to hunt down big-money fights, even though she could, given her significant following. She wants to work her way back up the ranks and become the best 135-pound fighter in the world again.

“She’s a weirdo,” Nunez said with a laugh. “I love her to death, but she is that type. She couldn’t care less about the money, really. She wants to dig down deep and test herself and show our kids that anything is possible, pretty much, through hard work.”

Tate was surprised at her home eight days before the Vieira fight by representatives from the U.S. Anti-Doping Agency, the UFC’s anti-drug partner. The doping control officers took samples of her blood and urine for testing. Tate joked that USADA officials must have been browsing her Instagram selfies.

Nunez, an Ultimate Fighter veteran, has seen a marked difference in Tate during training. “Especially now, when she’s in such good shape and stuff, I can’t take a second off with her,” he said. “I always have to be at the top of my game. She’ll catch me sometimes. Then I gotta hear it from her and she’s gonna tell people that she subbed me.”

Tate has completely changed her strength and conditioning regimen since returning from retirement. She’s working remotely with the Treigning Lab’s Sam Calavitta, who coaches the likes of former UFC men’s bantamweight champion TJ Dillashaw, and on site in Las Vegas with trainer Korey Goodwin. Since she fought Reneau in July, Tate said she has put on 5 pounds of lean muscle. Nunez said detail-oriented Calavitta has Tate’s weight cut down to the calorie.

That is a far cry from Tate’s pre-retirement training camps, which Nunez described as “old-school.” Nunez and Tate were not a couple until after her retirement in 2016, but they were teammates at Xtreme Couture. At the time, Tate’s camps were led by her then-boyfriend, Bryan Caraway. Tate has been public about how what she has described as a toxic relationship affected her training and performances. That’s one of the main motivating factors behind her coming back now, she said — to see whether she can achieve the potential she didn’t think she was able to reach before.

“I think it would be such a shame to leave the sport the way that I did, knowing that I was never allowed to or I was never able to give my full 100%,” Tate said. “Whether I become a champion or not, I had to do this for me.”

And that’s also why she has been thinking about Rousey recently. The two had one of the most historic rivalries in mixed martial arts in the early part of the previous decade. In many ways, the Rousey vs. Tate feud helped women’s MMA blow up, first in Strikeforce and then in the UFC. Rousey owns two armbar submission wins over Tate, in 2012 and 2013. Tate said that her relationship with Caraway was a “detriment” to her and that Rousey knew it — and exploited it.

Tate said it would be a “dream” for Rousey to return from retirement, adding, “I know I have what it takes to beat Ronda Rousey.”

But Tate doesn’t want anyone to take her opinion as a direct challenge. Rousey just had her first child with husband Travis Browne in September, and Tate respects that.

“Don’t get me twisted,” Tate said. “I’m not trying to call out a brand-new mama. This has to be something she wants, too. I wouldn’t want to just call her out. She’s doing her thing, she’s retired. I would want to fight her at her best. If she chose she wanted to come back and she was like, ‘I want to come back and fight Miesha Tate or whoever,’ I would love another shot at her. But only if she was taking it seriously and she was training at her best and that’s what she wants, too.”

Miesha Tate discusses how happy she was to be back in the Octagon at UFC Vegas 31.

Rousey vs. Tate 3 might not be realistic. Rousey has given no indication she wants to fight again. But Tate’s other goals for next year could be within reach. Tate has said from the moment she signed to fight Reneau that she wants another crack at Nunes. A win over Vieira, Tate believes, could get her that shot.

“I think a dominant win over her puts me, for sure, in the top five,” Tate said. “And I understand it could definitely put me in a No. 1 contender conversation. I think it depends on the performance.”

Monday through Friday, host Pablo Torre brings you an inside look at the most interesting stories at ESPN, as told by the top reporters and insiders on the planet. Listen

That’s very much on her mind as she prepares for this fight. Tate said she used the momentum from the Reneau finish to jump right back into training camp for Vieira. The fight was supposed to happen last month, but Tate tested positive for COVID-19, which she says has had no real ill effects on her training.

Tate wants very badly to make up for that lackluster, first-round defeat to Nunes in the main event of UFC 200. She envisions winning the title back from Nunes in 2022 and having Holm as her first challenger. Tate beat Holm to win the title at UFC 196 in March 2016 and Tate believes that rematch would make for the “perfect story.”

Of course, all these gold-lined roads for Tate first must go through Vieira. That’s fine, she said. Because if you weren’t convinced by her TKO win over Reneau, “then let me just sell you again Nov. 20,” Tate said.

An impressive victory could open up all kinds of fascinating matchups next year, fights that could infuse the women’s bantamweight division with some much-needed pizzazz. Tate is thinking big and is ready to back up her vision with her fists. On Saturday, she has a chance to open up the kind of possibilities that even Dana White cannot ignore.