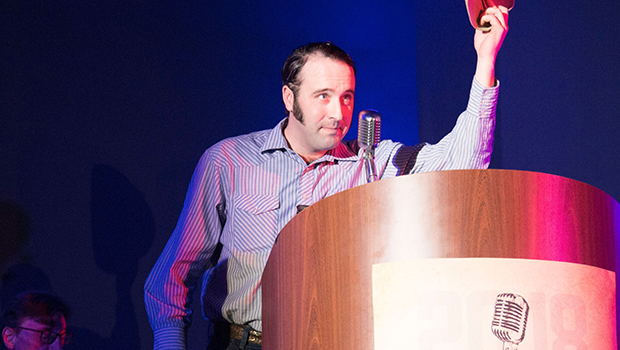 Luke Bell, a rising country music singer from Wyoming, passed away at the age of 32. The talent was found already deceased in Tucson, AZ on Aug. 29, after allegedly being reported missing on Aug. 20, according to the Tucson Police Department. His friend and fellow country singer, Matt Kinman, also confirmed the “heartbreaking” news to Saving Country Music. Almost a month later on Sept. 19, ABC 9 KGUN Tucson confirmed that the medical examiner ruled his death as being caused by “fentanyl intoxication.”

Find out more about Luke and his life below.

He decided to pursue a music career when he was in college.

Luke was attending the University of Wyoming but decided to drop out and move to Austin, TX to try his hand at country music. He would perform at several honky-tonks and saloons in the area until he eventually did a short stint in New Orleans, LA, according to The Boot. He went on to Wyoming before making his way to Nashville, TN, the country capital of the U.S.

Luke’s big break came when he was signed by Thirty Tigers in 2016 and released his self-titled album a year later. He gained nationwide recognition.

His new fame and success allowed him to support many big names over the years, including Willie Nelson, Dwight Yoakam, Nitty Gritty Dirt Band, and Hayes Carll, The Boot further reported. Despite the incredible opportunities, Luke seemed to stay humble and take his career day by day.

“To be honest, I live in the day, and I count smiles,” Bell he told The Boot in a 2016 interview. “That’s it. Listen, half the time, I end up drinking beer with my neighbors. Life’s not that bad. The downside, in some ways, is I don’t have a wife and kids, but at the same time, it’s pretty ideal right now. I just travel around to other cities and hang out with other people… The goal is to have high hopes and low expectations and have a good time.”

Now, You Can Register To Vote On Hollywoodlife For The Midterms & It’s So Easy

He reportedly suffered from bipolar disorder.

Luke’s friend Matt told The Boot that he was secretly battling a severe form of the disorder and he believes a recent change in his medication may have “played a role” in his disappearance and eventual death. At the time his body was found, no cause of death had been determined.

His family also released a statement to PEOPLE on Sept. 2, about Luke’s mental health struggles. “Unfortunately Luke suffered from the disease of mental illness, which progressed after his father’s death in 2015,” the family said. “Luke was supported through his disease by a community of loving family and friends. Despite this, he was unable to receive the help he needed to ease his pain.” In addition they told the outlet that their, “hearts go out to the millions of people affected by mental illness who, like us, understand the devastating disappointment of a system that consistently fails to provide caring solutions to those who suffer.”

He appeared to be an animal lover.

Luke shared several photos of animals on his Instagram page over the years. There are adorable snapshots of him with dogs, horses, exotic wild animals, and more. He even posed for a photoshoot with his guitar and a dog sitting beside him back in 2015.

Man…Luke Bell…what the fuck. RIP to a real one. Been a long time since I saw him and I was just talking about him the other day wondering what he’s been up to. Truly a sad night for country music.

After word got around about Luke’s tragic passing, posts started rolling in about the devastation his close family, friends, and fans were feeling. “Man…Luke Bell…what the f–k,” country star Joshua Hedley on Twitter. “RIP to a real one. Been a long time since I saw him and I was just talking about him the other day wondering what he’s been up to. Truly a sad night for country music.”

The band, Mike and the Moonpies, also shared a message about Luke on Facebook. “Word just came down on the passing of Luke Bell and we’re heartbroken over the news,” they wrote. “I can vividly remember the first time I met Luke at Hole in the Wall over a decade ago, down to the clothes on his back.”

“The man (and his music) left an impression,” they added. “He was a real deal traveling troubadour out there on that lost highway. Do yourself a favor and put on some Luke Bell tunes tonight in his memory. Rest In Peace, friend.”