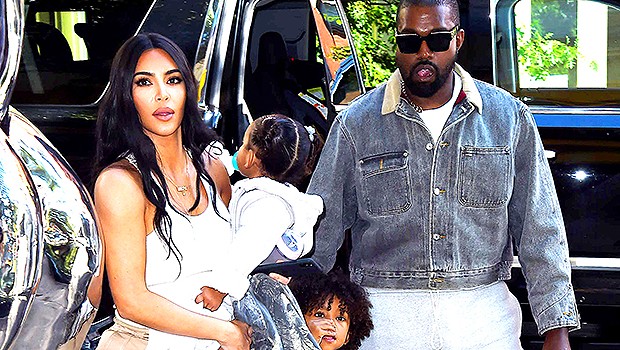 Kim Kardashian is a woman who knows what she wants — and she isn’t afraid to ask for it! The Kardashians star and SKIMS founder has been spending a lot of time with her ex-husband Kanye West, 45, recently, as her boyfriend, Pete Davidson, 28, continues to shoot a movie in Australia. But the beautiful billionaire knows that time is running out until her man returns from the land down under and she wants nothing more than for her things to remain peaceful between Kanye and Pete for the sake of her children, North, 9, Saint, 6.  Chicago, 4, and Psalm, 3. HollywoodLife EXCLUSIVELY learned.

“Kim wants Kanye to sit down face to face with Pete with the help of a mediator so that he can see what a good guy he is and how he is a positive influence in Kim’s life, as well as their kids’ lives,” a source told us, adding that Kim and Kanye’s oldest daughter. North, really likes Pete. “North has spoken to her dad about how cool Pete is and how he is like a funny older brother to her,” they said. “Kanye knows that Pete isn’t trying to hop into the father role with his kids and he also knows that he must bend so that he can continue having the type of co-parenting with his kids and Kim that he has right now after Pete returns.”

“Kanye also knows that he must let go of the anger that he had towards Pete, and he has talked with Kim about this a lot these past couple of weeks,” the insider said. “When Kanye is with his kids, he is the best version of Kanye. They love him so much and he feels the love, and, in return, he gives this love. He knows that Kim is in love with Pete because she has told him this. He also knows that his past behavior was unacceptable.” It seems that Pete is onboard with Kim’s plan, as the source told HollywoodLife, “Pete is open to a face-to-face meeting and he always has been.”

According to a separate source close to the family, when Kim started dating Pete in October 2021 after she appeared on SNL, “Kanye thought their relationship was a total joke. He didn’t take it seriously and never believed they would last as long as they have. Kanye lashed out but it was never his intention to hurt Kim through his actions; he was just hurt himself.”

“Now that Kanye has seen their relationship last longer than he ever imagined, he realizes he doesn’t want there to be this contentious energy between them. He’s moved past that and realizes it isn’t doing anybody any good to keep the animosity going. Kanye doesn’t see Pete going away anytime soon so he’s ready to move past the anger. As long as Pete is respectful towards Kim and the kids, he feels like he has to just let it go.”

‘PLL: Original Sin’ Reveals The Identity Of ‘A’ In A Shocking Finale Twist