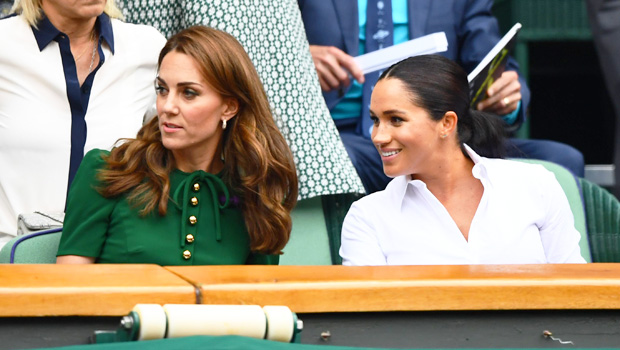 Meghan Markle turned 41 on August 4 and received a special message from Prince William and Kate Middleton. “Wishing a happy birthday to The Duchess of Sussex!” William, 40, and Kate, 40, wrote in their tribute to Meghan on their Twitter account. The Duke and Duchess of Cambridge’s tribute also featured a photo (which can be seen HERE) of Prince Harry‘s wife at Queen Elizabeth II‘s Platinum Jubilee in the U.K. in June.

William and Harry’s father Prince Charles, 73, and his wife Camilla Parker Bowles, 75, also honored Meghan on her birthday. “Happy birthday to The Duchess of Sussex!” the royal couple wrote in their Twitter post, which also featured a snapshot of Meghan at the Platinum Jubilee.

It was surprising to see members of the royal family publicly celebrate Meghan’s birthday, since the former actress and her hubby Harry, 37, have a tense relationship with his relatives. Brothers William and Harry are at odds over the latter’s infamous interview with Oprah last year, where he and Meghan called out the royal family for alleged racism and more.

It’s possible Harry/Meghan and William/Kate mended fences at the Queen’s Platinum Jubilee earlier this summer. The Duke and Duchess of Sussex, who now live in California with their two kids, flew to the U.K. to celebrate Harry’s grandmother. They attended the Service of Thanksgiving at St. Paul’s Cathedral, but they didn’t sit near William and Kate. As ex-working members of the Royal Family, Harry and Meghan couldn’t stand on the balcony for Trooping the Colour with the rest of the royals.

Prior to the Queen’s Platinum Jubilee, William and Harry were reportedly working on mending their relationship with video chats and text messaging.  “The brothers needed time for everything to settle down,” an insider told The Mirror. “The family, including William, had been disappointed in the way Harry and Meghan chose to leave the royal family. But now there is a strong feeling that what happened is in the past and that they have moved on.”

Peyton Manning’s Brothers: Everything To Know About Eli & Cooper