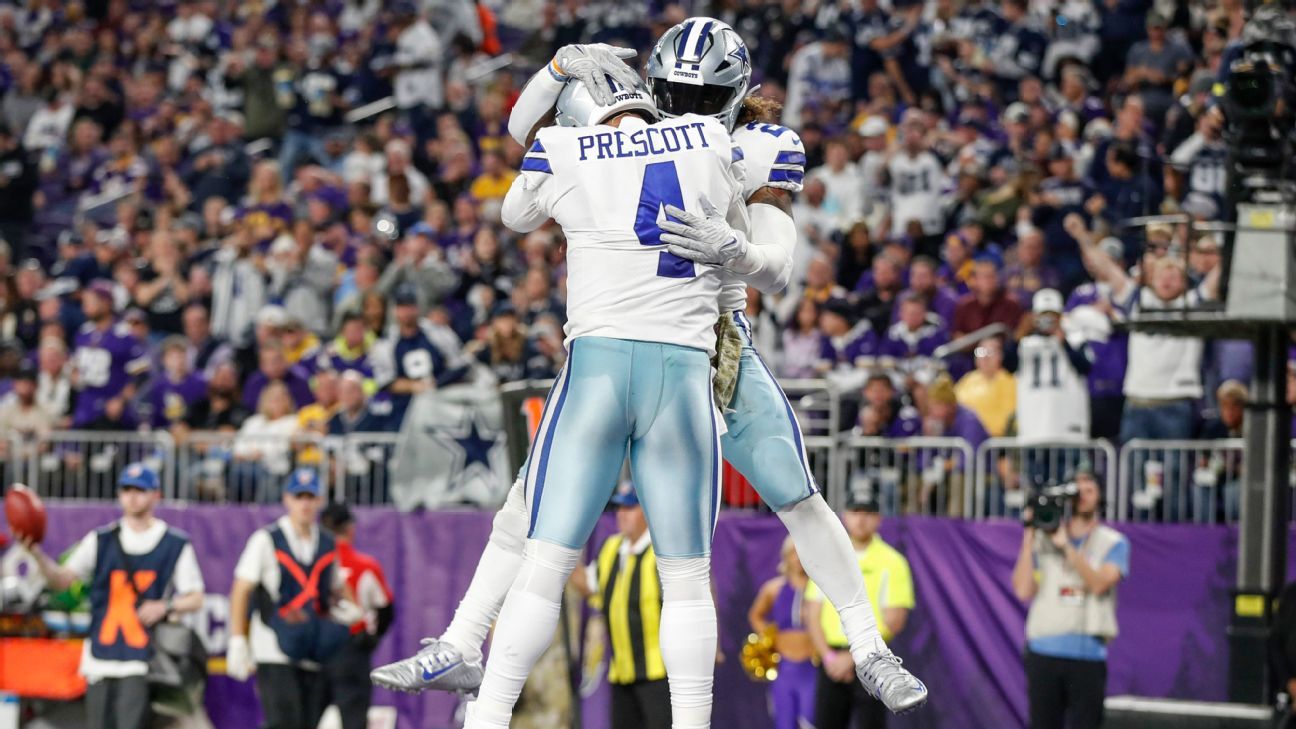 MINNEAPOLIS — Things can change in a hurry in seven days.

Last week, Dallas Cowboys owner and general manager Jerry Jones used the word “frustrated” over and over again after an overtime loss at the Green Bay Packers. On Sunday, following a 40-3 win against the Minnesota Vikings, Jones said he believes the Cowboys are Super Bowl contenders.

“A resounding yes. Yes. Unequivocally,” Jones said. “I think we’ve had adversity. We very easily could have more adversity … Yes, I think if we use the experience of what we’re having in the season, then we’re going to be playoff ready. But I sure do think that what I see out here right now is the team like that you could go get a Super Bowl with.”

At 7-3, the Cowboys are two games behind the 9-1 Philadelphia Eagles in the NFC East, and Dallas throttled the only other team in the conference with more wins — the 8-2 Vikings — with its largest road win in team history. The New York Giants also are 7-3, but the Cowboys beat them earlier in the season, and they will host New York on Thanksgiving for the first holiday matchup against their division rivals.

“I too thought this game was going to tell us what we are,” Jones said. “I don’t know that we’re that. I really don’t. But I know this, that we’re not a team that doesn’t respond when it’s wounded. Everybody thought against the Packers that we underplayed, and I think you saw what happened when we got out here tonight and the team all came together. We’ll build from this.”

“This week was a statement week,” said linebacker Micah Parsons, who had two of the Cowboys’ seven sacks on Sunday. “It says what we’re capable of when we put our mind to it.”

The Cowboys will have help on the way with the return of Pro Bowl left tackle Tyron Smith in December. He is close to returning to practice from a torn hamstring in training camp that required surgery.

Jones also confirmed that free-agent wide receiver Odell Beckham Jr. will visit with the Cowboys after the Giants’ game, although Jones didn’t have a specific date set. The Cowboys over the past few weeks have flirted with Beckham, who is rehabbing from a torn ACL suffered in the Super Bowl while with the Los Angeles Rams.

Jones would not get into what he wants to see from Beckham besides his health.

“Certainly, it’s time for us to sit down and visit,” Jones said.

Sunday’s win against the Vikings could not have been a better recruiting video for the Cowboys.

Dak Prescott completed 88% of his passes (22-of-25), which was third best in team history. Tony Pollard became the first Cowboys running back with 100 receiving yards and 50 rushing yards in the same game since Emmitt Smith in 1993. Pollard and Ezekiel Elliott became the first pair of Cowboys running backs with two touchdowns in the same game since 1980 (Tony Dorsett, Robert Newhouse).

The Dallas defense had seven sacks, its most in a game since 2008, and ended the Vikings’ 92-game streak with a touchdown, which had been the longest in the league.

“We had a good week. I think it’s always rewarding as a football team when your process lines up with your performance,” Cowboys coach Mike McCarthy said. “We wanted to come in here and play a complete game. We did. We had all the respect for these guys. They’ve been extremely productive on film, and we knew we needed to play at a high level today — and we did.”