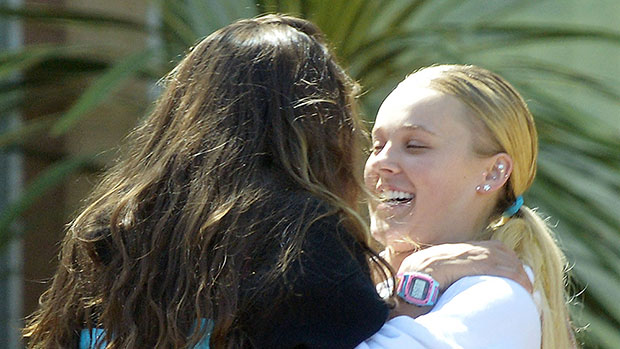 JoJo Siwa and Avery Cyrus are off and running! Following her August split with Kylie Prew, the former Dance Moms star, 19, took her new romance all the way as she and YouTube darling Avery were snapped in a slew of cuddly public photos. Avery was seen straddling JoJo, who held her off the ground, as they hugged and kissed in the sunshine. The TikTok star adorably rocked a black, clearly visible JoJo Siwa sweatshirt, colorful sneakers, hot pink pants, and a matching rainbow pastel watch. She wore her brunette hair hanging long and wavy.

JoJo wore her favorite white oversized Smurf’s sweatshirt, high top sneakers, and black biker shorts, with her famous blonde hair pulled into a simple ponytail. They both looked exceptionally happy as they chatted with friends, got gas, and enjoyed the laid back day.

The YouTube sensation and her new gal pal broke the internet when she confirmed the relationship via TikTok on Monday, September 12. In the sugary sweet clip, the duo kissed in a photo booth at pizza chain Chuck E. Cheese, among other adorable poses. It was captioned “Happiest Girl.”

Fans didn’t seem all that surprise, as rumors had been swirling about their burgeoning romance. “I KNEW IT,” reacted one of JoJo’s 43.6 million followers, while another quipped, “it was so obvious.” “Idk tbh they really just make since [sic] in my mind,” commented a third. “They are goofy, loud, fun people. I think they mesh well.” Others didn’t see it coming, with one fan admitting, “this wasn’t on my 2022 bingo card but happy for y’all.”

Madonna Hangs With Kids Lourdes, 25, & Rocco, 22, During Night Out In NYC: Photos

The new romance comes after JoJo’s streak of sharing bad celebrities encounters. Her resulting feud with Candace Carmeron Bure went viral after she called her out for a past incident, also via TikTok in July, and she hilariously took Justin Bieber to task (wearing the same Smurf’s hoodie, no less) for telling her to “burn” her colorful, customized convertible several years ago.

JoJo Siwa’s Haircut: Why She Hacked Off Her Iconic Ponytail For Pixie Cut & Short Styles