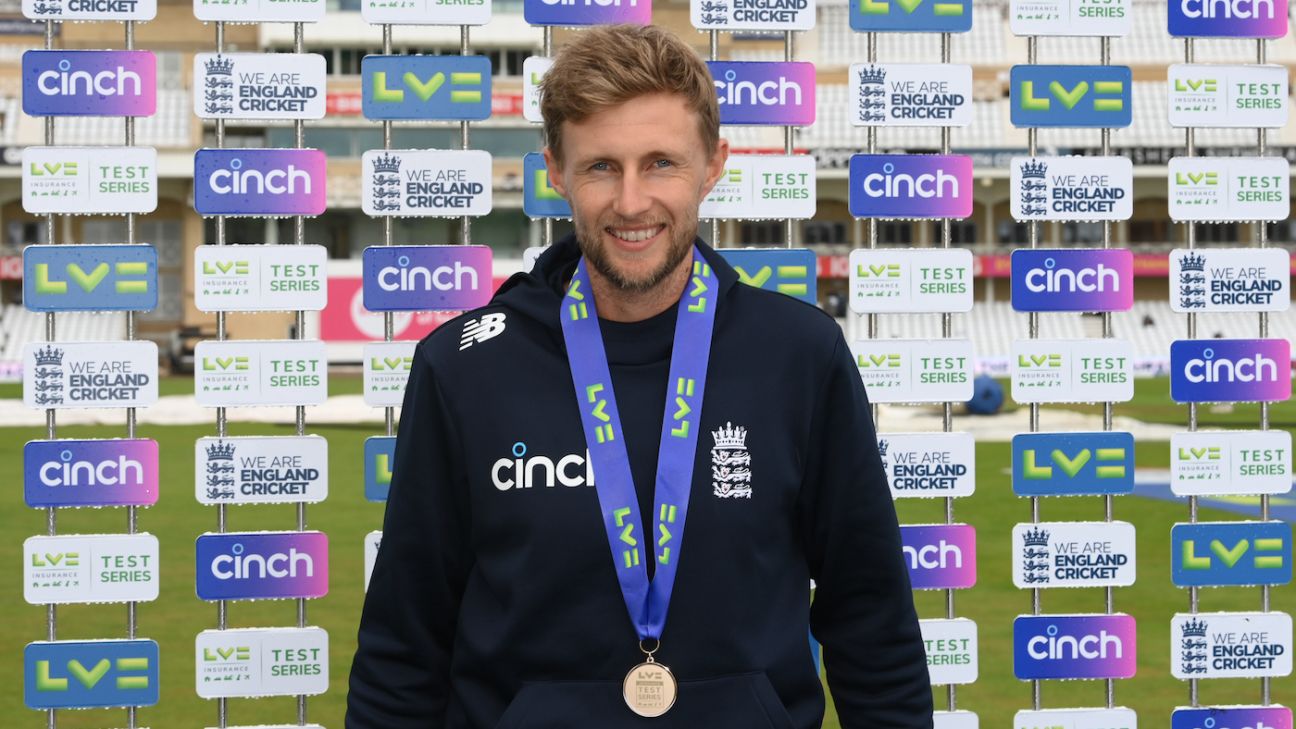 Joe Root says England were confident they could have “created nine chances” on the final day at Trent Bridge had rain not intervened.

India had nine wickets in hand going into that final day, requiring another 157 runs to win, and there is no doubt they were favourites. But rain forced a complete washout, meaning the first LV= Insurance Test was drawn.

But while Root, who was named Player of the Match after making a half-century in the first innings and a century in the second, accepted India were “in the driving seat”, he felt that the pressure of the situation could have played in England’s favour.

“At one stage it looked like we could have potentially had 40 overs and I think in that period, it felt like we would have been able to create nine chances on the surface like that,” Root said. “I’d be lying if I wasn’t to say that India weren’t in the driving seat going into today, but we know on a wicket like that, a couple of wickets in a cluster and of course that game can turn on its head.

“With the pressures of batting on a fifth-day wicket, things could very quickly have fallen in our favour and we certainly believed that we’d have been able to create nine more chances.

“If we’d have been good enough in the field and taken those then we could have been sat here one-nil up, but unfortunately the weather has won. In many ways, the weather’s robbed us all of a fantastic final day of Test cricket, which is a slight shame.”

It was intriguing to hear Root use the word ‘if” in connection to taking chances in the field. England dropped three catches in India’s first innings as well as missing four run-out opportunities to sustain an increasingly modest record in the field. While accepting that such errors were costing England, Root felt the secret to improvement was “calm and belief”.

“We certainly put the practice in,” Root said. “We catch a lot of balls in practice. It’s about trying to have an element of calm and trust and belief in your own ability. That can be hard in pressure situations. As a player, you just need to make sure you’re not panicking. You need to remind yourself that you’re doing all the hard yards and making sure that, when the next opportunity comes around, you’re giving yourself the best chance.

“Fielding at slip it is such a mental thing. If you can find a way of staying relaxed and trusting your technique, then you’re certainly in a better place to take the next opportunity.”

Root was reluctant to discuss selection ahead of the second Test and suggested that Covid protocols could render it tricky to bring in players ahead of second Test starting on Thursday. But Ollie Pope, who is close to full fitness after recovering from a quad strain, could well win a recall, with Dan Lawrence and Zak Crawley both sitting uneasily in the side. Haseeb Hameed could also push for selection.
As for players outside the current squad, there is a case for recalling Moeen Ali as a spin bowling all-rounder. England didn’t play a spinner at Trent Bridge but they could include Moeen, who has made five Test centuries and claimed almost 200 wickets, to help balance the side. Chris Woakes, who has an outstanding record at Lord’s, is unlikely to be considered as he recovers from a heel injury but is expected to be available for the third Test in Leeds.
With England’s seamers having enjoyed a relatively light workload – there were only 14 overs bowled in India’s second innings – there are no obvious reasons to rest and rotate ahead of the Lord’s match, so it seems James Anderson and Stuart Broad will retain their places. It was noticeable, however, that Root often preferred Ollie Robinson to Broad at key moments and he subsequently hailed his new seamer’s performance as “brilliant”.

“I thought Ollie bowled extremely well,” Root said. “He’s got a unique set of attributes. He has a very high release point and he makes things happen. He makes the ball nip around and his accuracy in this game was exceptional. He managed to do a brilliant job. He showed what he is very capable of doing at this level. In two Tests he has shown everyone how skilful he is.”

With none of his colleagues having managed a score higher than 32, however, Root accepted there was “a lot to work on” ahead of the next game.

“After our first innings, we were well below par,” he said. “250 on there would have been par. There’s a lot to work on. We know there are areas we need to be better: we need to take our chances in the field and we need to make big first-innings runs.”

Both sides travel to London on Monday and are expected to train at Lord’s on Tuesday.