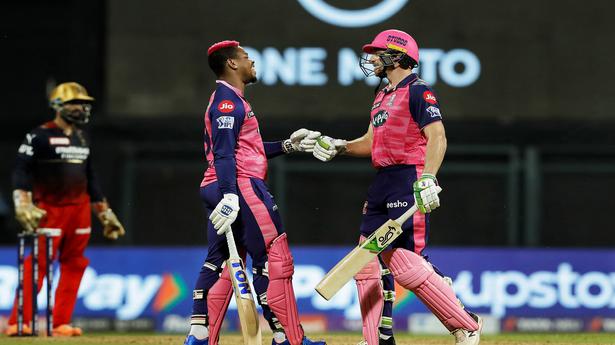 Jos Buttler hammered half a dozen sixes in his unbeaten 70 as Rajasthan Royals grafted their way to 169 for three against Royal Challengers Bangalore in the Indian Premier League here on Tuesday.

Buttler, fresh off a hundred in the previous game, had to work hard in his 47-ball knock on a slow Wankhede pitch. He had the support of Shimron Hetmyer (42 not out off 31) at the other end as the duo shared an unbeaten 83-run stand off 51 balls.

Royals did not have the best of times in Powerplay, reaching 35 with the loss of opener Yashasvi Jaiswal (4).

Buttler and Devdutt Padikkal (37 off 29) started playing their strokes after the Powerplay and shared a 70-run stand to give the innings a move on.

In the following over, Padikkal got a life too as he was dropped in the deep off left-arm pacer David Willey (1/29). The southpaw’s knock comprised two sixes and as many fours.

After his former RCB teammamte Harshal Patel sent Padikkal back to the dressing room, Royals skipper Sanju Samson (8) fell to a soft dismissal off Wanindu Hasaranga after dispatching the mystery spinner for a straight six.

It seemed the ball stopped on Samson who offered a sitter straight back to Hasaranga, leaving the Royals at 86 for three in the 12th over.

In the slog overs, Royals found it tough to get the big hits with RCB bowlers using the conditions effectively.

Buttler took a step back and let the hard-hitting Hetmyer go for the boundaries.

However, the English wicketkeeper was back to his fluent best, hitting Mohammad Siraj for successive sixes in the 19th over to get to his half-century.

Akash Deep ruined his figures in the 20th over when he was at the receiving end for a tight no ball call before Buttler hammered him for couple of maximums over long on.

Hetmyer finished the innings in style with a six over deep square leg as the final over yielded 23 runs. Buttler did not hit a single four in his unbeaten effort. Considering Royals’ all-round bowling attack, RCB will have to dig deep to get over the line.