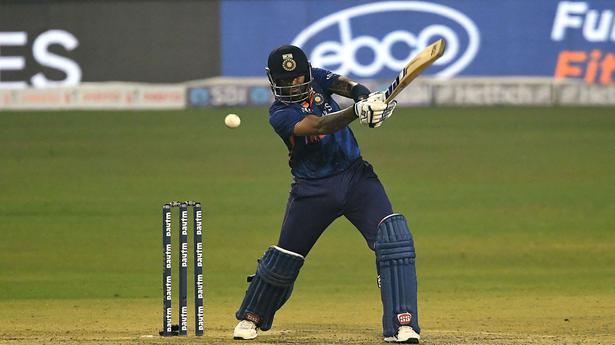 Mumbai Indians will have the returning Suryakumar Yadav’s flamboyance in the middle-order as they look to bounce back against a confident Rajasthan Royals unit in the IPL in Navi Mumbai on Saturday.

While five-time champions MI suffered a four-wicket defeat against Delhi Capitals in their lung-opener despite posting 177, Rajasthan mauled Sunrisers Hyderabad by 61 runs in a dominant show.

So far in this IPL, there has been a trend of winning the toss and bowling first and it is likely to continue.

Mumbai have two of the best openers in captain Rohit Sharma and Ishan Kishan, who blazed his way to an unbeaten 81 against DC, justifying his heavy price tag.

With a wide range of shots at their disposal, the duo can give the hosts a strong start, so vital in the scheme of things.

Suryakumar, who has joined the team after his recovery at the NCA, will likely bat at number three and has the ability to play match-winning knocks at any positions. He will be keen to get going quickly and justify the faith shown in him by the owners.

Mumbai’s middle-order crumbled in the game against DC and one among Anmolpreet Singh, Tilak Verma and Tim David would have to make way for Suryakumar.

Veteran all-rounder Kieron Pollard, who has a knack of hitting huge sixes, also perished cheaply against DC and he would be eager to get going against Royals.

More than their batters, the Mumbai bowlers are the ones who would need to step up as they were unable to defend 177, and considering Rajasthan’s power-packed line-up, they would need to hit the right lengths.

The team would bank on pace spearhead Jasprit Bumrah to deliver, but he also needs support from the others like of Basil Thampi and Daniel Sams.

The role of Murugan Ashwin, who picked up two wickets on his MI debut, too would be crucial as he can effect breakthroughs and also put the brakes on the scoring rate.

Meanwhile, Rajasthan ticked almost all the boxes in their game against Sunrisers and were ahead in both bowling and batting, even as fielding remains a cause for concern, having dropped catches.

The onus will be again on skipper Sanju Samson to lead from the front after he made a scintillating 55 in his team’s opener.

The RR openers — Yashashvi Jaiswal and Jos Buttler — got starts against SRH but they will need to convert them into substantial scores.

The other batters including Devdutt Padikkal and Shimron Hetmyer also clicked and they would hope to repeat the show.

The Rajasthan bowlers, led by Prasidh Krishna, were on target against SRH. They have a lethal attack in pacer Trent Boult and spinners Ravichandran Ashwin and Yuzvendra Chahal.

Pacer Nathan Coulter-Nile is injured and he could make way for someone like Navdeep Saini in the playing XI.