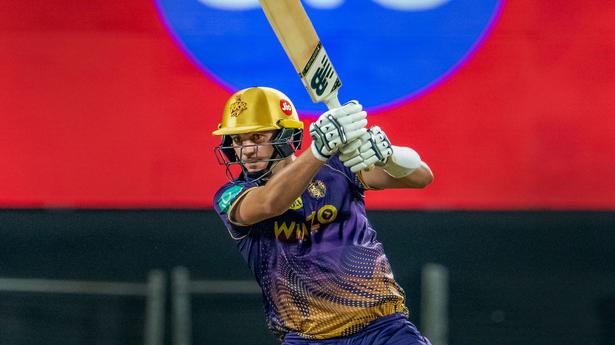 KKR made two changes, bringing in Pat Cummins for Tim Southee and handing Rasikh Salam a debut at the expense of Shivam Mavi

KKR made two changes, bringing in Pat Cummins for Tim Southee and handing Rasikh Salam a debut at the expense of Shivam Mavi

Suryakumar Yadav marked his maiden appearance in Indian Premier League’s 2022 edition with a fifty that helped Mumbai Indians set a respectable total against Kolkata Knight Riders. But it was Pat Cummins, also playing his first game of the season, who took the game away from Mumbai Indians and hand the Knight Riders a rare win against its bogey team.

Riding on Suryakumar (52, 36b, 5×4, 2×6) and Tilak’s 83-run partnership off 52 ball and Kieron Pollard’s streaky cameo (22 n.o., 3×6), Mumbai Indians set the Knight Riders a target of 162 at the Maharashtra Cricket Association’s International Stadium on Thursday night.

When Andre Russell, whose tantalising face-off versus Jasprit Bumrah lasted very short as he perished to Tymal Mills’ short-ball ploy, despite Venkatesh Iyer looking strong at the other end, Mumbai Indians was in charge. Kolkata required 61 runs off 41 balls, with half of its side back in the hut, primarily to effective short-ball ploy by the pacers.

In came Cummins and sealed the deal in the next 17 minutes. Facing just 15 balls, Cummins’ exhilarating display of clean-hitting left Mumbai Indians flummoxed and an 18,000-plus spectators in the stands – the largest turnout this IPL – in awe. Not only did Cummins equal the fastest fifty in IPL off just 14 balls but he also helped the Knight Riders surpass Mumbai Indians’ 161 for four with a whopping four overs to spare.

Cummins started his onslaught to Mills with a six and a four off the left-arm pacer in the 14th over and continued his wrath on Bumrah in the next, meting the pace wizard the same treatment.

Fellow Australian Daniel Sams suffered the most in the next over that proved to be a 35-run over. It included four huge sixes, a four and an above-waist-high no-ball that was smartly caught on the ropes by Suryakumar and Cummins ran two.

The cameo nearly blurred the memories of Mumbai Indians’ amassing 76 runs in the last five overs to set up an interesting chase. Umesh Yadav, newbie Rasikh Salam – playing only his second IPL game against the same team that he debuted for in 2019 – and Cummins kept the MI top-order in check. The mystery spin duo of Sunil Narine and Varun Chakravarthy carried on the good work as Mumbai Indians was reeling at 54 for three at the halfway stage.

Suryakumar and Tilak, dropped by Rahane off Umesh on three, then exploded. In the end, it mattered little as Cummins stamped his authority on the game.

A well-deserved opportunity for Keerthi James