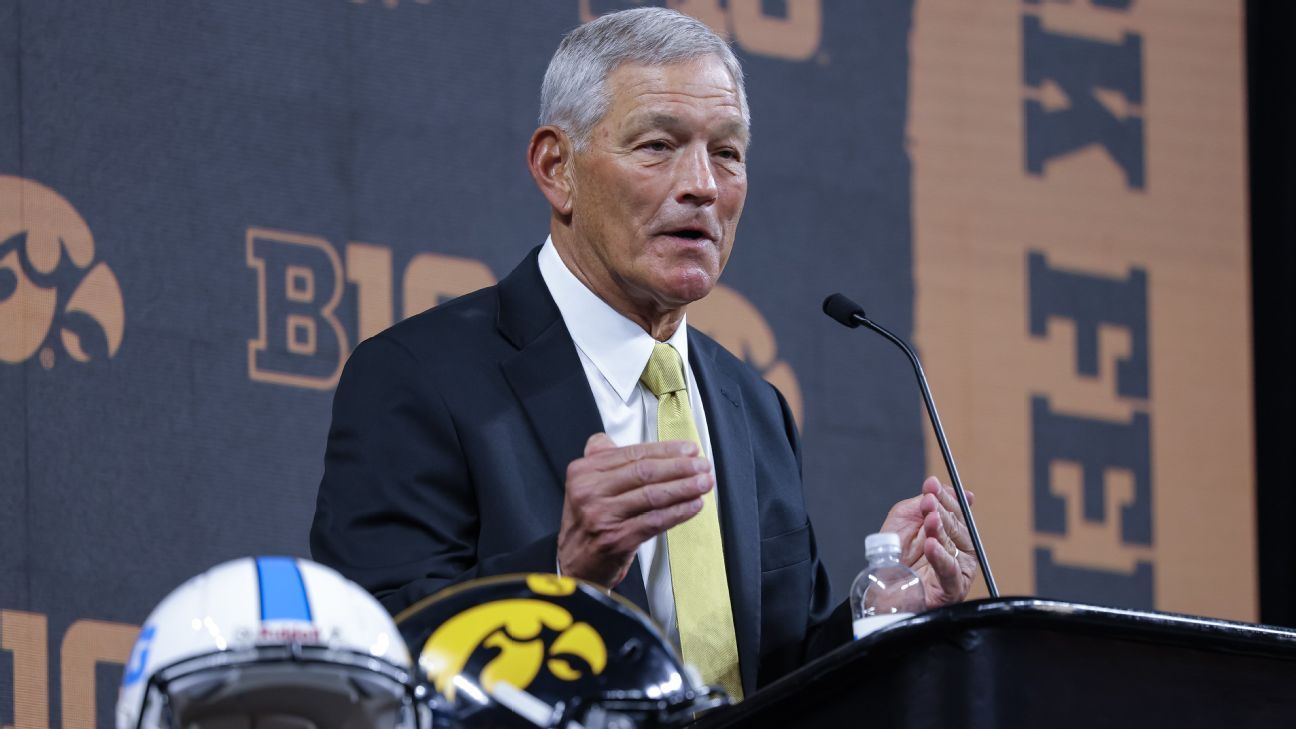 INDIANAPOLIS — Iowa‘s Kirk Ferentz, the nation’s longest-tenured FBS head coach, said Tuesday at Big Ten media days that he’s as concerned as he’s ever been about the path college football is on right now.

“I think we’re in a really precarious place,” said Ferentz, entering his 24th season as Iowa’s head coach. “There’s just a lot of vagueness, a lot of uncertainty. We really don’t have a firm structure. We don’t have a basic set of operating rules. I don’t think anybody right now can really explain the NIL [name, image and likeness policy] in detail, what you can and what you can’t do. I know you can’t entice recruits, but it sure seems like maybe that’s going on a little bit. There’s just a lack of overall clarity.”

“We need some intervention, and then my bigger concern is: Who’s going to do it, right? Where’s it going to come from? Where’s that leadership going to come from, because we’re all busy?” said Ferentz, who joked that his old counterpart at Wisconsin, Barry Alvarez, was available.

Pat Fitzgerald, entering his 17th season as Northwestern‘s coach, echoed Ferentz’s sentiments regarding everything from the transfer portal, NIL questions and even the recruiting calendar, which has become never-ending.

“The game on the field has never been better,” Fitzgerald said. “Once you walk off the field, it’s never been more chaotic.”

Ferentz signed a contract extension this offseason and will earn $7 million annually. He said the best part of coaching for him remains the players, and that’s what keeps him coming back.

Asked if his concerns about the direction of the sport had soured him on his coaching future, Ferentz said, “Yes and no. I mean, there are moments where it’s like, ‘What the hell?'”

Ferentz said frustration is a common theme among his coaching brethren and pointed to the Nick Saban-Jimbo Fisher verbal dustup in May as evidence.

Ferentz has guided the Hawkeyes to 10-win seasons in two of the past three years. He said his philosophy has always been that “as long as the good outweighs the bad,” he will continue coaching.

Asked if the sport was there yet, Ferentz said, “No, but I think we’re approaching it.”

Ferentz is supportive of players earning money on their name, image and likeness once they get to campus, but said the idea of schools bidding for players coming out of high school combined with proposed legislation to ensure that players can transfer as many times as they want isn’t good for anybody.

Cubs to part with Heyward, who rallied ’16 team