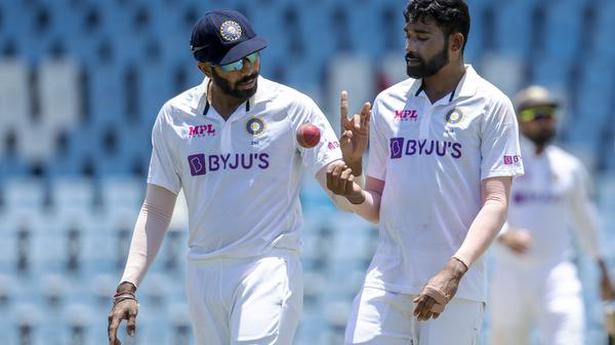 Bumrah and Shami have the ammunition to hunt down batters with ruthless, clinical efficiency

These are glory days for Indian pace bowling.

The sight of Jasprit Bumrah and Mohammed Shami running in and tormenting the batsmen is one for eternity.

This pace pack hunts down batters with ruthless efficiency. The execution of plans is clinical.

As India eyes a historic maiden Test series win on the South African soil, the focus will be on its rampaging pacemen. India now has plenty of gunpowder. It can blow away line-ups.

As pace predators, Bumrah and Shami are a study in contrast, compounding batsmen’s woes.

Bumrah is tall, has a unique high-arm action. His load-up is so much away from the body that it is incredible his arm is stretched fully and is straight and high as he delivers the ball. The bounce he gets is natural.

And for a long-lever bowler, he has a deceptively, whippy, quick-arm action that generates speed. His victims pick his action a fraction late; by then the damage is done.

In the Centurion Test, brushing away an ankle niggle, Bumrah showcased his full repertoire.

He had castled Rassie van der Dussen with a delivery that came in sharply from outside off, and also took the ball away sharply from the off-stump. And he had the yorker ready — bowling incisive yorkers is a lot about understanding your release point — for night-watchman Keshav Maharaj.

The intelligent Bumrah has compelling pace variations, alters the angles. The manner in which he trapped a battling Dean Elgar leg-before on the final day of the first Test is a case in point.

The role of India’s previous bowling coach Bharat Arun in Bumrah’s development has been significant.

Shami’s methods are different. Firstly, he is much shorter than Bumrah and his arm is not as high at the point of release. If Bumrah’s bounce is steepling, Shami is a skiddy customer.

Shami’s seam position is exemplary and his ability to seam the ball both ways from an off-stump line makes him dangerous.

With Shami, you get speed, precision and two-way movement. Once he finds his rhythm, he can be a handful. He can reverse-swing the ball capably, too.

Both Bumrah and Shami can be a distinct threat to the southpaws as well, adeptly switching angles. And both are accurate with their length and line. They can also mix up their length to disrupt batsmen’s footwork.

The lively Mohammed Siraj has a beautiful away-swinger and a potent in-dipper. He is a capable support seamer with 36 wickets from 11 Tests at 27.94 (SR 54.8).

And to think that Ishant Sharma (311 Test wickets) and Umesh Yadav (156 scalps) are sitting out. These are truly glory days for Indian pace bowling.