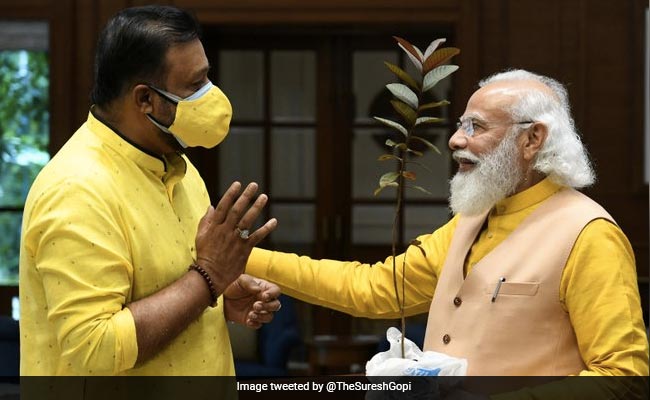 A guava sapling, nurtured by a Keralite girl in her village home with dreams to propagate the message of organic farming across the country, will soon spread its leaves in the courtyard of the official residence of Prime Minister Narendra Modi, if everything goes as planned.

Actor-turned-BJP MP, Suresh Gopi handed over the tree sapling, gifted by Jayalakshmi, a 10th standard student in the southern state, to the Prime Minister during his recent meeting with him in New Delhi.

The MP shared the photo of PM Modi accepting the gift by the aspiring girl farmer in his Twitter and Facebook handles on Thursday with a brief note.

“Nurtured by a thoughtful young girl in a courtyard of Kulanada, a village in Pathanamthitta, all set to bloom in the residence of the Indian Prime Minister,” Mr Suresh Gopi tweeted.

(1/4) Nurtured by a thoughtful young girl in a courtyard of Pathanapuram, all set to bloom in the residence of the Indian Prime Minister. Handed over the guava sapling presented by Jayalakshmi (on my visit to Gandhi Bhavan) to the @PMOIndia@narendramodi ji yesterday as promised. pic.twitter.com/2C2oHAJa02

Hailing from Pathanamthitta district, Jayalakshmi was a recipient of the state government’s ”Karshaka Thilakam” award for the best student (female) for developing and maintaining an organic farm in her home courtyard.

The student had handed over the sapling to gift to the Prime Minister during the MP’s visit at Gandhi Bhavan in Pathanapuram earlier this week.

“The PM accepted it wholeheartedly and assured to have it planted in his official residence,” the ”Kaliyattam” actor further said in the FB post.

Mr Gopi also said if the plant is reached his hands, we can also expect an Indian Prime Minister to say tomorrow that a sapling sent by a little girl from Kulanad is growing in the yard of my official bungalow.

“Anyway, this is a great message… the message of pure democracy,” he added.

The elated Jayalakshmi later said she had never ever expected that her gift would reach the prime minister and she was so happy to know it from the actor-MP’s social media posts.

How to silence calls from unknown callers on iPhone