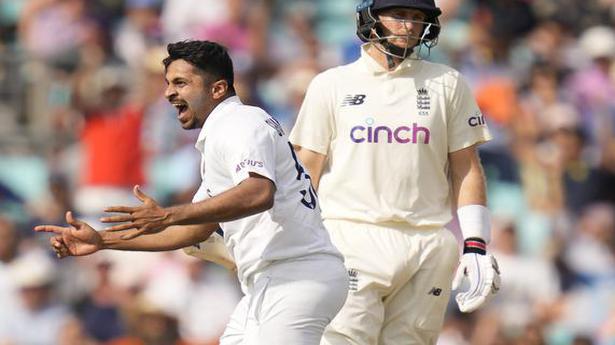 Shardul hit two half centuries (57 and 60) as he helped his team in both the innings, not only with the bat but also with the ball.

“It (Shardul’s contribution) is massive. He (Shardul) played two crucial knocks that really helped us to gain momentum, even in the first innings he changed the momentum and the momentum clearly shifted in our favour,” Bumrah said at the post-match press conference after his team recorded a staggering 157-run win over England to go 2-1 up in the five Test match series.

Shardul hit two half centuries (57 and 60) as he helped his team in both the innings, not only with the bat but also with the ball.

The ‘Palghar Express’ returned with figures of 1/54 and 2/22 and got the prized scalp of rival skipper Joe Root in the second essay.

“And then, we created a lot of pressure in the evening and got two early wickets. And in the second innings as well, when we got to a reasonable score but he (Shardul) took the team towards safety.

“And with the bowling effort as well, he chipped in with crucial wickets. His effort was massive and it is always necessary to have that fifth bowler, who gives you that comfort and does the job for the team,” added Bumrah, as he was effusive in his praise for the Mumbai bowler.

“So, very happy for him and hopefully he carries on and does even better things in the future,” quipped the Gujarat speedster. India bowlers led by Umesh Yadav (3/60) wreaked havoc on the fifth day as they shot out England for 210 to script a memorable win.

Bumrah (2/67 and 2/27) also became the fastest Indian pacer to grab 100 Test wickets, in his 24th game, surpassing the legendary Kapil Dev, but the fast bowler said that he does not think much about numbers.

“I don’t think much about numbers. Because it is a very good thing, I wanted to play tests, and I put a lot of effort for the tests. And I work hard as I want to play long tests, so I am very happy that the team won and I could contribute to it. So, very happy and hopefully it will continue,” he said.

According to Bumrah the “fighting spirit” displayed by the team was pleasing and satisfying.

“Sir, you gave an interesting stat, we had not thought that so many equations relating to 100 have happened. But as a team, we are very happy because we were under a bit of pressure in the first innings and after that we fought and got the team to a respectable total.” “Bowling also started well, so gradually when the team was under pressure, we found a way, fought and got the team to a better situation. So that fighting spirit is very satisfying and gives pleasure, because nothing is easy in a Test match and no opposition will give you an easy thing,” he said.

‘We are happy bunch’

Jasprit Bumrah said his team’s success lies in the fact that it is a “happy bunch” that lives in ‘present’ and doesn’t focus on negatives.

Bumrah’s response came when he was asked if the news of Head Coach Ravi Shastri and other support staff members testing positive in the middle of the Test match affected them in any way. “We focus on the good things. We want to focus on controllable things and we as a team are bunch of individuals who are very happy and fun-loving people, not always trying to find needles in all the things,” Bumrah said during the virtual press conference. It was Bumrah, who tilted the match in India’s favour in the post-lunch session on the final day of the fourth Test, with his two-wicket burst.

Bumrah said the team completely shut the outside noise and was not overtly worried when they were down at 127 for 7 in the first innings.

“We wanted to fight till the end and that’s the character we wanted to show and things that are going outside is something that we wanted to address later.” His final figures were 2/27 in 22 overs on a flat deck and the key was building the pressure, said the senior speedster.

“In Test cricket, nothing is easy. Even though it was a very good wicket, you have to bowl in right areas and that’s the message you want to communicate. We had decided, even if wicket is on flatter side, we have to create pressure for the longest time.

“We created a lot of pressure in the first hour and we realised that it was a flat wicket and but our job was to not let the game slip away and we are happy to do that.” The IPL and the World T20 are also approaching but Bumrah doesn’t want to lose focus on immediate goals.

“When you play a Test match, you don’t realise what has been done before or how many overs you have been able to bowl because right now the focus was on doing the job for the team,” Bumrah, who has taken 18 wickets in 151 overs so far in this series, said.

“I want to play longest time for my country so I work hard on gym, on my diet and everything I try to control. I train really well and I have got ammunition inside me and when I want to push, I can push hard.

“I am not thinking too far ahead about the IPL or World Cup because then mentally you can be tired. My focus is on the present, concentrating ball by ball and get results in our favour.”