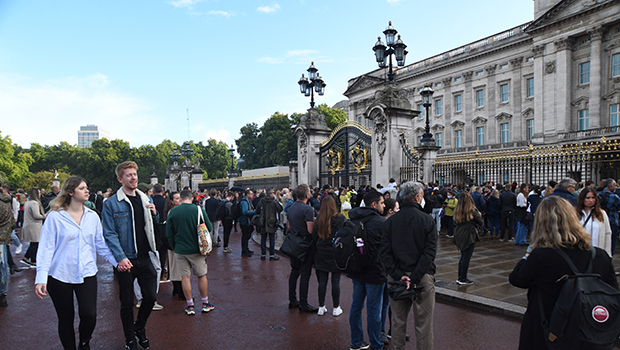 If you believe in signs, then this one says it all. As mourners gathered around Buckingham Palace following the announcement of Queen Elizabeth II’s passing at 96, double rainbows appeared clear as day over the home. Whether it was a sign of the Queen reuniting with her late love Prince Phillip once again, or her way of telling us all she’s at peace, the stunning display created a sense of calm amongst the large crowd. As Britain prepares to enter a 10-day mourning period, locals arrived to the palace with flowers, signs and trinkets to pay tribute to their Queen.

More News On The Queen’s Passing:

In an official statement from Buckingham Palace on Sept. 8th around 6:30 PM local time, the palace announced that Queen Elizabeth II passed away at 96 years old. “The Queen died peacefully at Belmoral this afternoon,” the statement read. “The King and the Queen Consort will remain at Balmoral this evening and will return to London tomorrow.” Royal correspondent Omar Scobie added, “Senior members of the Royal Family—including the Prince of Wales—are all gathered at the residence.” Prince William was reportedly also at his grandmother’s side, while Harry was on his way from Los Angeles.

Harry and his wife, Meghan Markle, were quick to mourn the monarch, by updating their Archewell website with a memorial for Harry’s Grandma. “In Loving Memory of Her Majesty Queen Elizabeth II,” it said, along with the years of her birth and death. The Queen’s son, Prince Charles, who will now succeed her as King, released a lengthy statement shortly thereafter. “The death of my beloved Mother, Her Majesty The Queen, is a moment of the greatest sadness for me and all members of my family,” it read. “We mourn profoundly the passing of a cherished Sovereign and a much-loved Mother. I know her loss will be deeply felt throughout the country, the Realms and the Commonwealth, and by countless people around the world. During this period of mourning and change, my family and I will be comforted and sustained by our knowledge of the respect and deep affection in which The Queen was so widely held.”

Queen Elizabeth’s death comes after Buckingham Palace released a statement revealing that her “doctors [were] concerned for Her Majesty’s health” on the morning of Sept. 8. She received further medical attention at Balmoral Castle in Scotland, until her passing. Her family members rushed to be by her side in the hours before she passed.

Queen Elizabeth II’s Grandchildren: Meet All Her Royal Grandkids From Oldest To Youngest