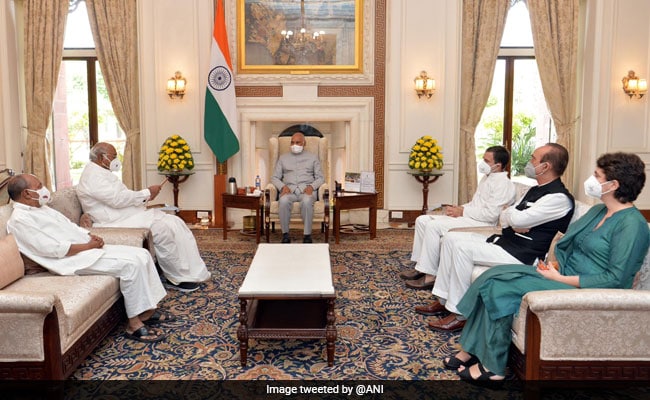 UP violence: Congress seeks dismissal of Union Minister Ajay Mishra whose son is accused in the case

Sack the Union Minister whose son is accused of mowing down protesting farmers in Uttar Pradesh, a Rahul Gandhi-led Congress delegation urged President Ram Nath Kovind, who, in turn, has said he will speak to the government over the issue.

Union Minister of State for Home Ajay Mishra’s son, Ashish Mishra, was arrested over the weekend for allegedly running over protesting farmers in Uttar Pradesh’s Lakhimpur district on October 3. Eight people, including four farmers, were killed in the incident.

The Congress is pressing for dismissal of the Union Minister for a fair probe in the matter, which they say is also the demand of the farmer families who lost their loved ones.

“The families believe that till his minister father is in the post there can  be no justice. This is also the demand of the people of the UP and the all right thinking people of the country…The president said he will consult the government,” Priyanka Gandhi Vadra, who was in UP yesterday attending the final prayer meeting for the killed farmers,  told presspersons after meeting the President.

Rahul Gandhi demanded that two sitting Supreme Court judges should probe the Lakhimpur incident and those who committed murder should be punished.

“Told President Kovind that MoS Home should resign to ensure impartial probe in Lakhimpur violence as his son is an accused,” Rahul Gandhi said.