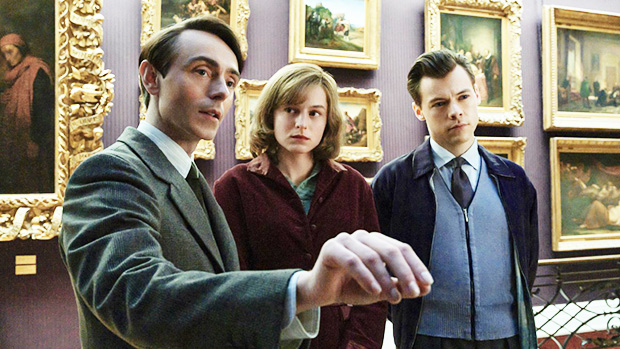 David Dawson, 40, has a major role in the romantic drama film My Policeman, based on the 2012 novel of the same name. The movie explores a complicated love triangle between three characters played by David, Harry Styles, and Emma Corrin. Fans are obviously already familiar with Harry, while Emma is best known for playing Princess Diana in season 4 of The Crown. But who is David Dawson?

My Policeman stars streaming on Amazon Prime Video on Nov. 4, so HollywoodLife rounded up everything you need to know about David. From his past acting roles, to his pivotal role in My Policeman, find out more about David below!

David plays Patrick in ‘My Policeman’.

He formed a close bond with Harry Styles.

David described the former One Direction member as trustworthy and down-to-earth in an interview with Vogue. “We promised each other very early on that we would continue to check in all the time, to ensure that we had each other’s backs, because some of the scenes can be vulnerable emotionally as well,” said David, who has gay sex scenes with Harry in the movie. “So I greatly appreciate the fact that we were constantly in communication,” he said.

David felt a lot of responsibility starring in My Policeman as a gay man himself. “I certainly came away from this film with a greater feeling of acknowledging the privilege that I have, the freedoms and rights that I have,” he told Vogue, before revealing that he’s getting married in 2023.

“But yeah, [I want] to acknowledge what’s been fought for and achieved over the years to allow my generation to have what we have,” he also said.

‘Disenchanted’: The New Trailer & Everything We Know About The ‘Enchanted’ Sequel

David has appeared in a number of popular British television shows, such as The Road to Coronation Street, Luther, The Last Kingdom, Ripper Street, and Year of the Rabbit. He also appeared in three episodes of Peaky Blinders in 2013.

David is also a stage actor.

David has been starring in U.K. theater productions since 2005. For his performance in The Life and Adventures of Nicholas Nickleby, David received a Laurence Olivier Award nomination. His most recent theater performance was in Fairview in 2019.