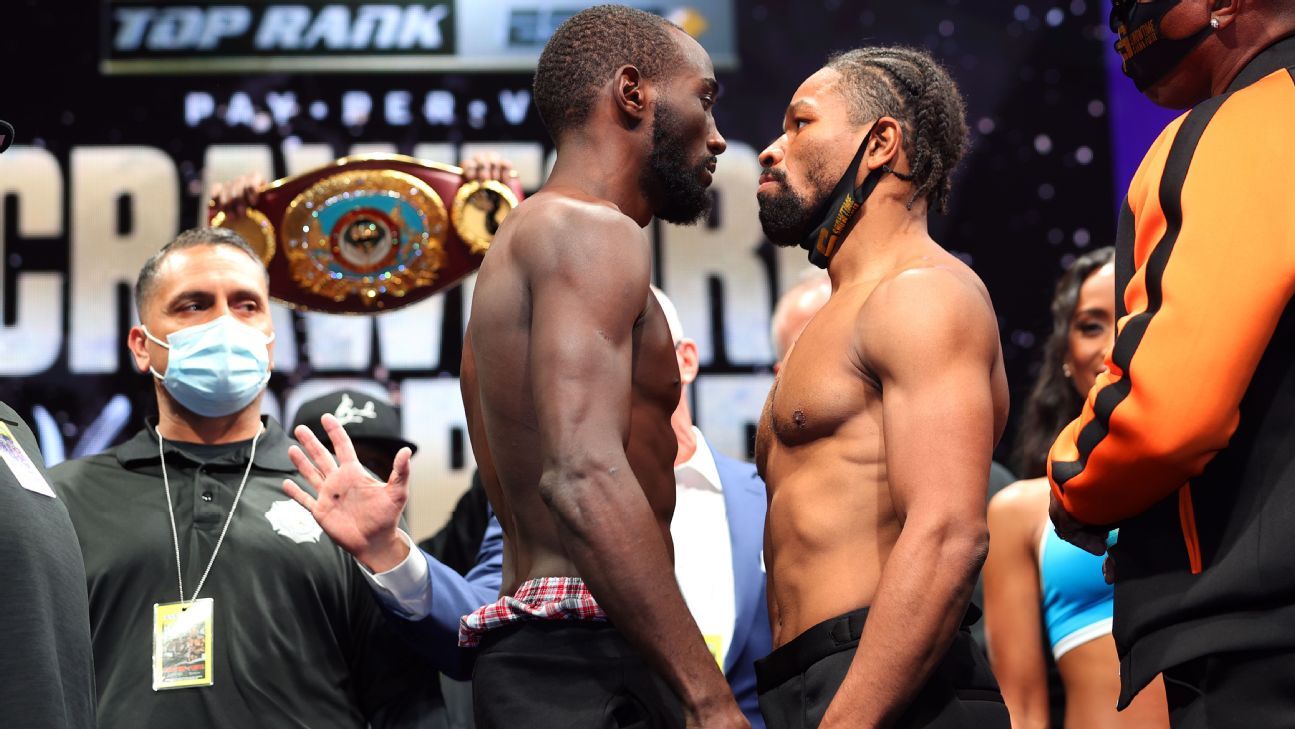 LAS VEGAS — Terence Crawford and Shawn Porter both weighed under the 147-pound limit on Friday, one day before they’ll vie for the WBO welterweight title (9 p.m. ET, ESPN+ pay-per-view).

“I respect everything that Shawn does,” Crawford, 34, said Wednesday. “Shawn is athletic, he can box, he can bang, he can move around in the ring, he can cut corners and take angles.

The Omaha, Nebraska, native is fighting as a welterweight for the sixth time (all title fights). He won the championship with a TKO victory over Jeff Horn in 2018 and most recently defended it with a stoppage of Kell Brook last November.

ESPN’s No. 2 welterweight, Crawford has finished his last eight opponents inside the 12-round distance. Porter, though, has never been stopped. All three of his defeats came via razor-thin decision (against Brook, Thurman and most recently, Errol Spence Jr.)

“All those close losses he got against Spence and Thurman, Bud’s going to make him [Porter] look like he’s a B-level type of fighter,” Crawford’s trainer, Brian McIntyre, told ESPN’s Ben Baby. “We hope that Shawn comes in there and pushes Bud that to that A-plus type of performance, you know?

“Because when you look at it, Bud gets better and better each fight. The tougher the opponent is, the better Bud looks.”

The two-time 147-pound champion will end a career-long 15-month layoff when he meets Crawford on Saturday. More importantly, the 34-year-old Las Vegas resident will end Crawford’s wait for an elite opponent.

Crawford (37-0, 28 KOs) is promoted by Top Rank, and Porter (31-3-1, 17 KOs) is aligned with PBC. Bob Arum and Al Haymon rarely do business with one another, and the contentious relationship halted Crawford’s hope of fighting a top welterweight. But when the sides struck a deal months ago to avoid a purse bid, Bud finally had a top-flight foe to prove his talent against.

“When you consider the experience in this fight and me having more experience than Terence Crawford, that is a fact,” said Porter, ESPN’s No. 4 welterweight. “When I say the fight between me and Terence Crawford is going to be great, it’s gonna be great. When I say I have what it takes to beat him, don’t sleep on that, believe that.”