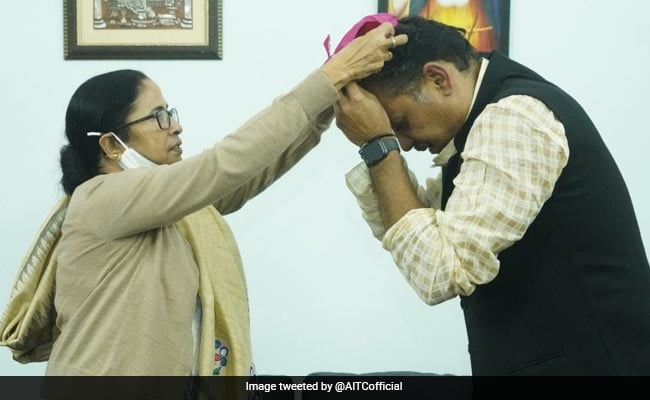 Expelled Janata Dal (United) leader Pavan Varma and the Congress’ Kirti Azad joined the Trinamool Congress in Delhi this evening in the presence of Mamata Banerjee, in a move that marks the Bengal Chief Minister’s first foray into Bihar.

The induction of Mr Varma and Mr Azad are significant moves as Ms Banerjee slowly expands her party’s national footprint in order to challenge Prime Minister Narendra Modi and the BJP in 2024.

“Today I have joined the Trinamool. After leaving the JDU I had time for contemplation. Looking at today’s political landscape, we can see it is necessary to have a strong opposition. Mamataji is building a meaningful party and that is why I joined. (After the) 2024 (election) Mamata Banerjee will be in Delhi (to form) the government,” Mr Varma told reporters.

“We are elated to welcome Shri Pavan Varma into our Trinamool Congress family. His rich political experience will help us serve the people of India and take this nation forward to even better days!” Bengal’s ruling party said, sharing a video of Ms Banerjee garlanding Mr Varma.

Kirti Azad – a three-time Lok Sabha MP from Bihar’s Darbhanga seat – praised Ms Banerjee as someone who can “fight for the country on the ground” and for providing India with “a new direction”.

“The country needs a person who can fight on the ground… (and give it) a new direction. She has proved (she can do this),” Mr Azad said after joining the Trinamool.

“I am a sportsperson… no caste or religion… I will fight for what is good for the country and keep it together against those who are trying to break it,” he added.

Pavan Varma was one of Bihar Chief Minister Nitish Kumar’s closest aides before he and master poll strategist Prashant Kishor were sacked in January last year over disagreements with their boss over the controversial citizenship law.

Since then, Mr Kishor and his I-PAC have helped Mamata Banerjee and the Trinamool record their statement win over the BJP in the April-May Bengal election – a win that has added further credence to the Trinamool and Ms Banerjee’s credentials as a national challenger to PM Modi and the BJP.

Kirti Azad is a member of India’s 1983 cricket World Cup-winning squad, who was earlier with the BJP. However, he was suspended after openly targeting then Union Finance Minister Arun Jaitley over alleged corruption in the Delhi cricket association.

The Congress played down the exit of Mr Azad; Pawan Khera said: “Those who don’t want to struggle are leaving and joining other parties. People who want to struggle for the country are with Congress.”

The Trinamool is also expected to welcome former Congress leader Ashok Tanwar to its fold.

Mr Tanwar – the former Lok Sabha MP from Haryana’s Sirsa – was a close aide of Rahul Gandhi before quitting in 2019, two weeks before the Assembly election. He supported Dushyant Chautala’s JJP (now in alliance with the ruling BJP) and campaigned against the Congress.

Mr Tanwar, who was removed as chief of the state unit shortly before he left the Congress – had claimed in a letter to Sonia Gandhi the party was “going through an existential crises… because serious internal contradictions”. In February he launched his own party – Apna Bharat Morcha.

Mamata Banerjee is in Delhi till Thursday, and is expected to meet with opposition leaders to chalk out a strategy to take on the BJP during the winter session of Parliament, which begins next week.

Much of the focus during this session will likely be on the repeal of the controversial farm laws, which PM Modi said last week would be repealed. Passed last year, the laws triggered furious protest by farmers nationwide – protests backed by opposition parties including the Trinamool.

Post the Trinamool’s emphatic win in the Bengal election, Ms Banerjee has emerged as a driving force in calls for the opposition to unite against the BJP. She has also emerged as one of the more likely prime ministerial candidates, although Ms Banerjee has been quick to play this down.

The party has also welcomed a number of leaders in Bengal, including Mukul Roy and former minister Rajib Banerjee, who re-joined just months after he quit ahead of the election the BJP lost.

Any meeting with the Congress in this visit, however, will come knowing the two parties fought the Bengal election on opposite sides, with the party opting not to heed Ms Banerjee’s calls for unity.

With input from PTI