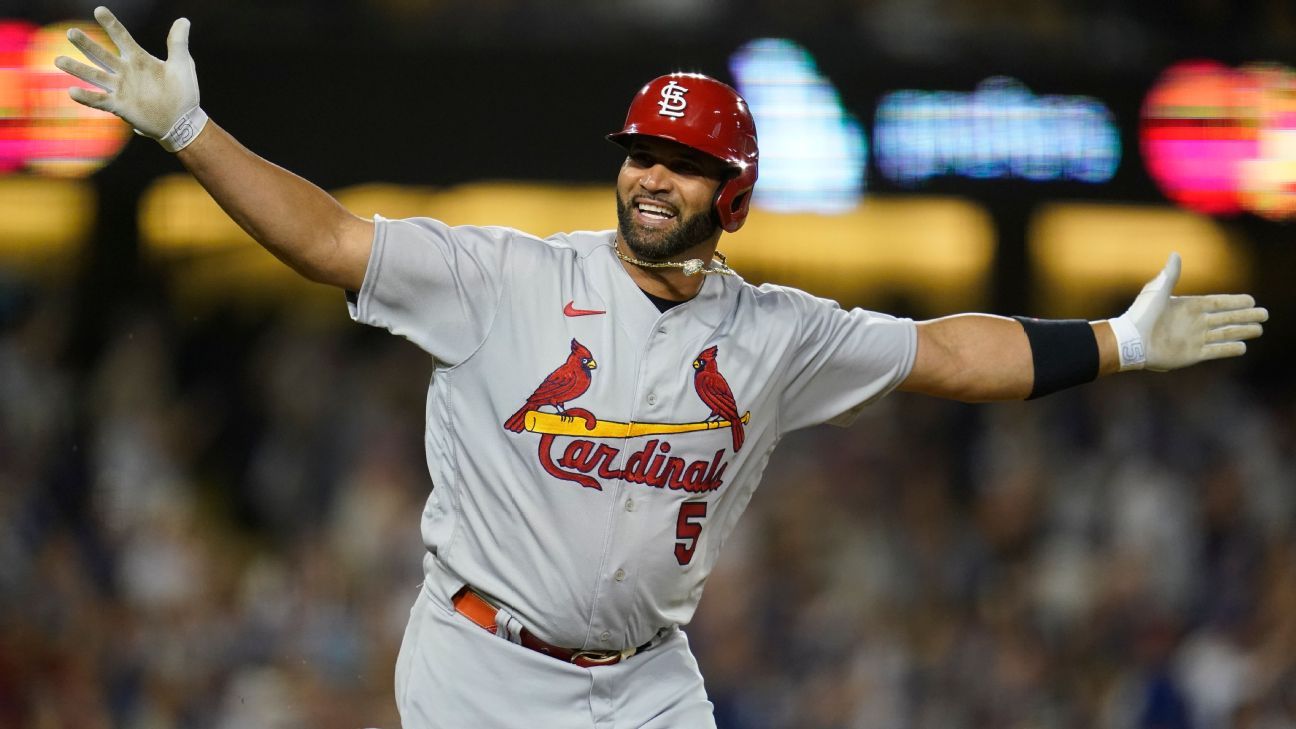 LOS ANGELES — Albert Pujols became the fourth member of the 700 home run club on Friday night, and he did so in emphatic fashion, launching two home runs in front of a packed Dodger Stadium crowd.

The first homer — a 434-foot, two-run blast to left field — came off Dodgers left-hander Andrew Heaney in the third inning. The second one was a three-run shot in the fourth off righty Phil Bickford. By that point the St. Louis Cardinals held a 5-0 lead, and Pujols had driven in all of his team’s runs.

Upon crossing home plate after his 700th homer, Pujols raced to the backstop to embrace Adrian Beltre, his longtime rival and one of his closest friends. Shortly thereafter, he found Yadier Molina and wrapped him in an emphatic hug.

Pujols, winding down the final season of a Hall of Fame career, joins Barry Bonds, Hank Aaron and Babe Ruth in the 700 home run club. He is the only one among them to hit Nos. 699 and 700 on the same night. Pujols now has 2,208 RBIs for his career, second on the all-time list behind Aaron’s 2,297.

It’s fitting, perhaps, that the 42-year-old designated hitter accomplished an incredible milestone here at Dodger Stadium, the place that he has often said played a big part in energizing him to play one final season in 2022.

Pujols joined the Dodgers last May, shortly after his release from the Los Angeles Angels, and was reinvigorated while serving as a part-time starter and late-game pinch-hitter over the last five-plus months. He was effective against left-handers and was a major influence in a veteran-laden clubhouse that lovingly called him “Tio Albert.”

Before the game, the Dodgers played a montage for Pujols, with Julio Urias, Hanser Alberto, Justin Turner, Max Muncy, Will Smith and Dave Roberts providing heartfelt messages. Pujols and Molina were gifted golf bags to commemorate their final seasons, then Pujols grabbed the mic to thank the Dodgers’ fans and their organization.

“It brought me so much joy, not just to me, but to my family,” Pujols, addressing the media before the game, said when asked what the atmosphere at Dodger Stadium meant to him. “I think it brought something inside me, that little boy once again that was missing that part of the game.”

Pujols’ final season has seen him play some of his best baseball down the stretch. After his 2-for-4 night Friday, he is batting .319/.381/.696 with 15 home runs and 38 RBIs in 48 second-half games. His 15 homers and 1.076 OPS are both tied for the second-best in the majors in that span, behind only Yankees star Aaron Judge. The surge also has coincided with the Cardinals practically running away from the rest of the National League Central.

Pujols began this season as a platoon option at DH, but he has morphed into one of the Cardinals’ most consistent hitters and is basically an everyday player as they venture into the postseason.

Pujols now has 21 home runs on the year, giving him 18 20-homer seasons for his career, third-most in history behind only Aaron (20) and Bonds (19). He joins Ted Williams as the only players to hit 20 home runs in both their first and final seasons. He owns the most multihomer games after turning 42 in major league history, with four.