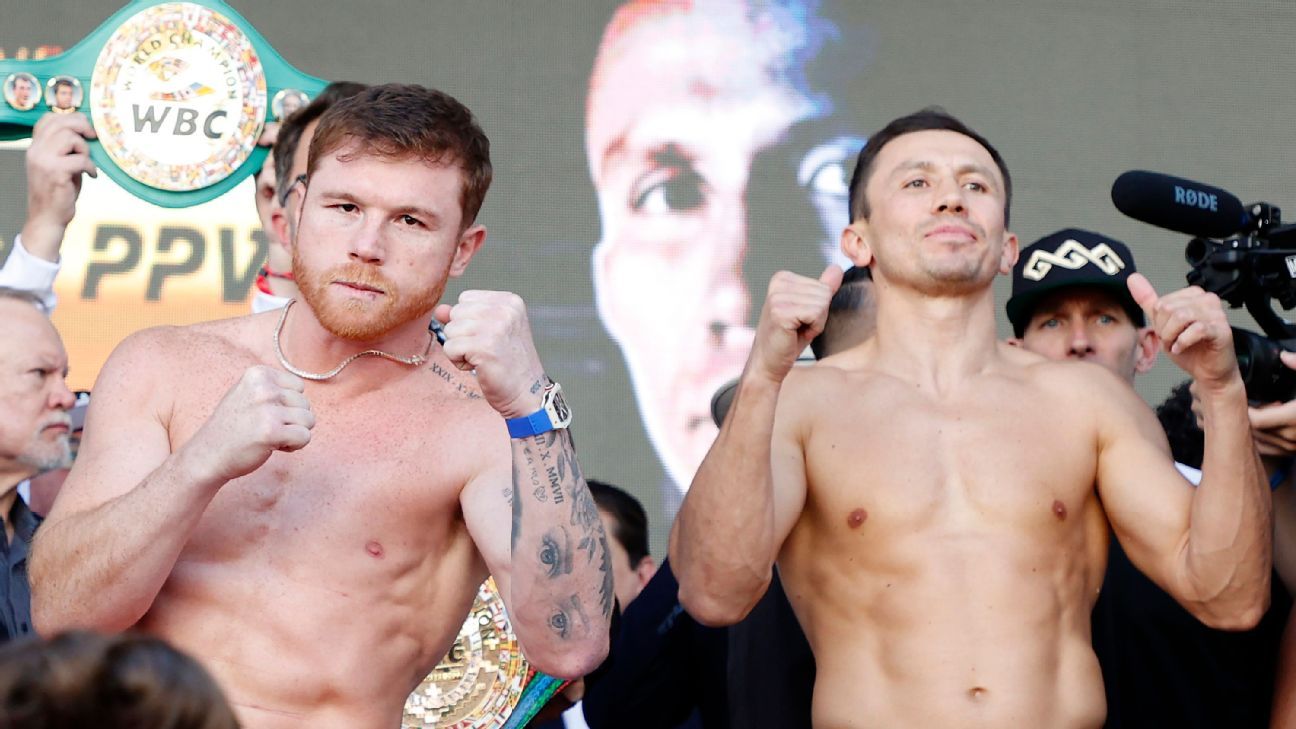 Alvarez (57-2-2, 39 KOs), 32, defeated Golovkin by majority decision in September 2018 in a rematch of a controversial split draw the year before. Golovkin has been waiting for the trilogy bout for four years and with a win, finally can erase all the doubts, as can Alvarez.

Golovkin (42-1-1, 37 KOs), 40, is the unified middleweight champion and is moving up in weight for this fight. Alvarez unified the 168-pound division with victories over Callum Smith, Billy Joe Saunders and Caleb Plant.

Follow along as Mike Coppinger and Ben Baby recap the fights from ringside.

Akhmedov wins every round against Rosado

As always, Gabriel Rosado was a stubborn and tough opponent. But Ali Akhmedov had patience and perseverance against one of boxing’s most rugged veterans. Akhmedov didn’t drop a single round on all three scorecards and won a unanimous decision, 100-91.

The Kazakhstan fans settled into their seats, several of them waving the country’s blue and yellow flag, cheering on their fellow countryman as Akhmedov (19-1, 14 KOs) connected often at distance. Rosado (26-16-1, 15 KOs), a Philadelphia native who now lives in Puerto Rico, struggled early but seemed to find his bearings in the later rounds. He was successful in the ninth and 10th rounds and even forced Akhmedov to retreat at times.

However, it wasn’t enough to move the judges to score any round for him. Akhmedov won his third straight bout.

It wasn’t always pretty, but Austin “Ammo” Williams got the job done.

The Houston native scored a unanimous decision over Kieron Conway in the first fight on the pay-per-view portion of tonight’s card, 96-93, 97-92, 97-92.

It was a fight that was more fascinating than interesting. Conway was throwing scoring shots and had Williams fighting tentatively early throughout the fight. In the sixth round, Conway landed a right hand that momentarily stunned Williams (12-0, 9 KOs).

But everything flipped in the ninth round. Williams caught Conway (18-3-1, 4 KOs) with a lead right hand that caused Conway to buckle near the ropes and eventually scored a knockdown. — Baby

The plan for Diego Pacheco worked.

Anyone who could read a betting sheet knew the objective of his match against Enrique Collazo. Pacheco, a dumbfounding favorite (-3000), was expected to finish Collazo quickly to interject some buzz into his career.

Pacheco did his part. The Los Angeles native put Collazo (16-3-1, 11 KOs) down in the fifth round. When Collazo got back to his feet, Pacheco quickly swarmed his Puerto Rican opponent and forced a stoppage.

While the fifth round was entertaining, it’s still unclear just how good Pacheco (16-0, 13 KOs) can be. Better competition could indicate where Pacheco’s ceiling may be. — Baby

In the fifth round of a fight Castro had dominated, he unleashed a massive right uppercut that flattened Montiel and prompted referee Tony Weeks to immediately stop the bout. Montiel (6-1, 3 KOs) was on his back for around two minutes before he eventually sat up and received a round of applause from the crowd inside the arena.

Castro (8-0, 6 KOs) picked up his first stoppage in his last three fights, with all of those bouts occurring this year. The Fresno, California, native has been consistently featured on Alvarez’s undercards, which shows just how much promoter Matchroom thinks of Castro. — Baby