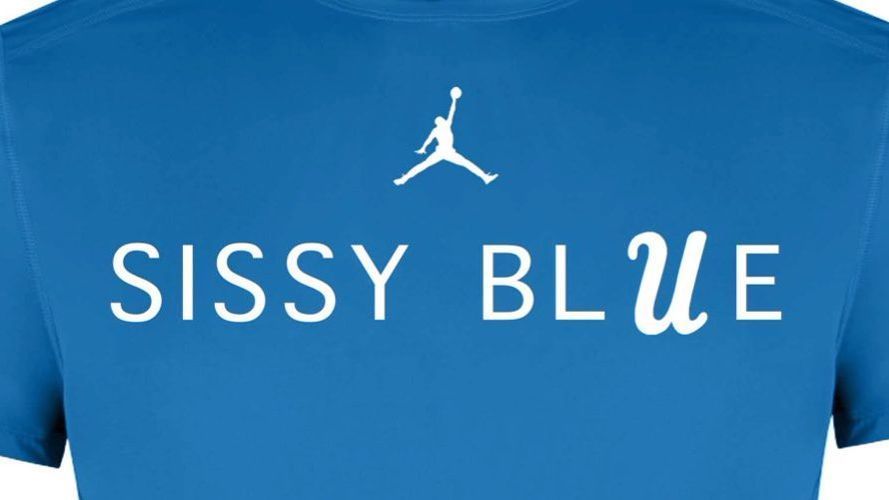 UCLA is making sure neither Ed Orgeron nor LSU forgets anytime soon the Bruins’ 38-27 victory over the Tigers last Saturday, especially in light of the coach’s comments to a fan before the game.

The official Twitter account of UCLA football updated its header to include a blue shirt that reads: “SISSY BLUE,” with a scripted U and Jordan Brand Nike symbol. The Bruins are clearly throwing shade at Orgeron, who was caught on camera exchanging trash talk with a fan as Orgeron walked into a tunnel at the Rose Bowl.

“Bring your ass on, in your sissy blue shirt,” Orgeron shouted at the fan.

UCLA, on its Twitter page, even tweeted “peep the header.”

The UCLA fan, according to the Los Angeles Times, was David Witzling, who said he was, in fact, wearing a black UCLA shirt and that his children were the ones wearing blue UCLA shirts.

The Witzling family provided the Times video showing the entire exchange, which was initiated by Witzling reminding Orgeron of his comments prior to his final game as USC’s interim coach in 2013 when he said that week during a rally leading up to the UCLA game: “Come Saturday night, we’re gonna let those little boys from across town into our stadium and we’re gonna lock the gates.”

UCLA won that game 35-14 and Orgeron was informed days later that he would not be getting the permanent head-coaching job. Steve Sarkisian wound up getting the job, although Orgeron told ESPN in 2014 that he thinks he would have landed the USC job had he not lost the season finale to the Bruins.

“That [2013 loss to UCLA] cost this old boy a lot of money,” Orgeron joked back in 2014 while taking the year off from coaching.

Witzling told the Times that he teased Orgeron about what he said back in 2013 as Orgeron approached the Rose Bowl tunnel. At first, Orgeron gave Witzling a thumbs up when Witzling asked him how he was doing, but then Witzling, according to the Times, zinged Orgeron with “We’re going to lock those gates, and we’re going to beat you down. Remember SC?”

That’s when Orgeron made his “sissy blue shirt” comments.

Witzling said his daughter, Natalie, asked, “Did he say that? Was he really, like, upset?”

“Of course,” Witzling responded with a laugh.

LSU, going back to last season, has now lost six of its past 11 games and has given up 34 or more points in its past four outings after going unbeaten in 2019 and winning the national championship.

Dabo: Offense ‘under evaluation’ for 4-3 Clemson