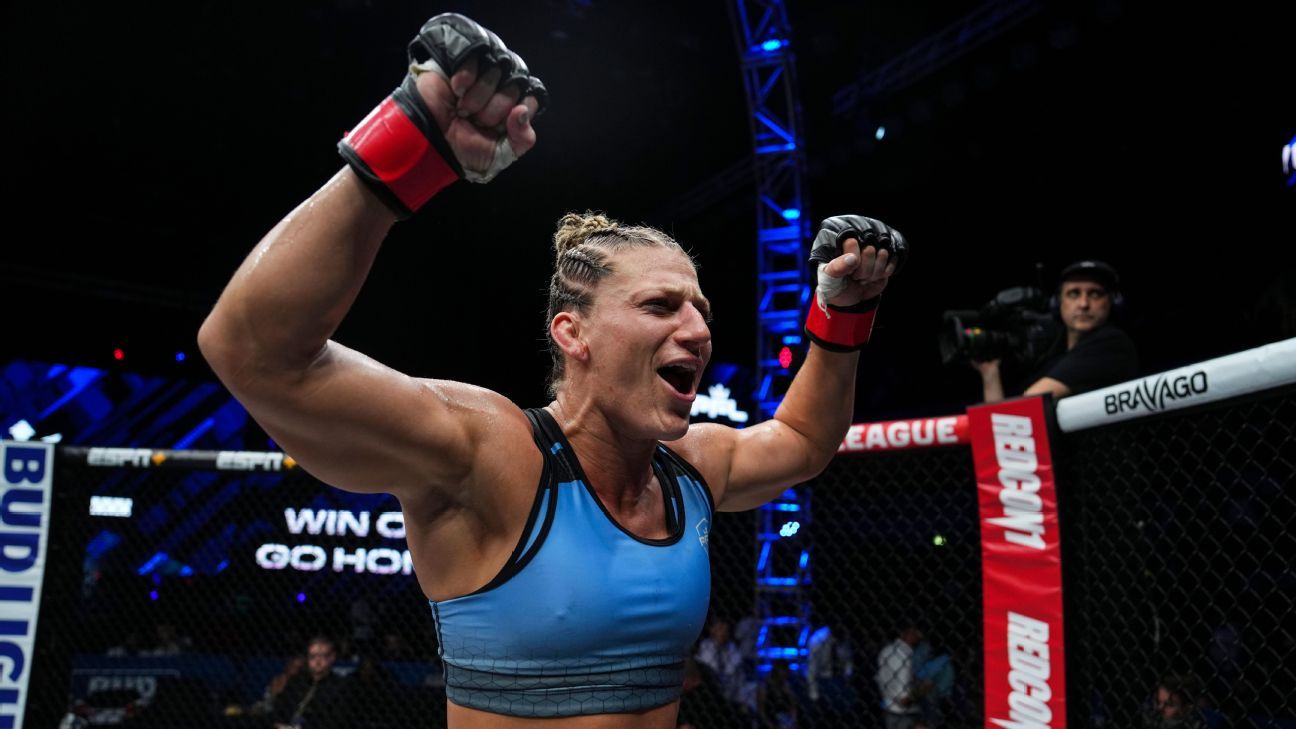 The 2022 PFL season comes to an end Friday, as all six weight classes will crown a champion at the PFL World Championships at Hulu Theater in Madison Square Garden in New York (ESPN+ PPV at 8 p.m. ET, with prelims on ESPN+ at 5:30 p.m.).

In the main event, Kayla Harrison will go for her third straight win of the women’s lightweight season title as she fights Larissa Pacheco. Harrison has defeated Pacheco twice in PFL competition, most recently beating Pacheco to claim the title in 2019 via unanimous decision. Harrison is ranked No. 8 in ESPN’s women’s pound-for-pound rankings.

Also on the card, Bubba Jenkins will fight Brendan Loughnane in the co-main event for the men’s featherweight championship and former UFC bantamweight Aspen Ladd makes her PFL featherweight debut against Julia Budd.

ESPN betting expert Ian Parker shares his insights and analysis on each of the six title fights, as well as PFL’s first women’s featherweight bout.

Previous fights between Harrison and Pacheco went the distance, with Harrison winning both by unanimous decision. While both fighters have evolved over the years, Pacheco has improved her striking and still has potent KO power, which Harrison will need to pay attention to.

Regardless of the opponent, look for Harrison to do what she does best: Get the fight to the ground and dominate. Expect a lot of clinching against the cage early on, and eventually it will go to the mat. The moneyline odds on Harrison (-650) are too high, and there very well might be people that are giving Pacheco a puncher’s chance. However, I am going in a different direction. As a Brazilian jiu-jitsu black belt, Pacheco has skill on the mat that I think will allow her to fend off Harrison from finishing her early, even if the fight hits the ground. Over 1.5 rounds.

I am surprised Loughnane is the favorite here based on the overall performance of both fighters this season. Loughnane will have the better boxing, but Jenkins isn’t far behind.

The difference in this fight will be Jenkins’ wrestling. If he can use his striking to successfully set up his takedowns, then Loughnane will be doing more defending than bringing the fight to Jenkins. Jenkins to win (+135).

Delija was and still is my pick to win the heavyweight championship. As long as he doesn’t get reckless, this should be a relatively easy win for him. He is the better fighter both as a striker and grappler. He also has a knockout over Scheffel earlier this season.

Don’t be surprised if Delija goes for an early takedown to avoid giving Scheffel any chance of landing a fight-ending punch. Look for Delija to dominate. Delija to win inside the distance.

I will make this simple: If Ladd can’t get the fight to the mat, she will lose this fight. Nothing that Ladd does should surprise Budd in this fight, as she has faced better wrestlers, strikers and grapplers throughout her career. Seeing Ladd as a 2-1 favorite is a surprise to me as she hasn’t won since 2019, and Budd has proved to be the better striker.

Ray has shown his versatility this season, but he is taking on an opponent in Aubin-Mercier who is more skilled and continues to improve his overall game. Don’t expect this to be the most exciting fight, as we’ve seen Aubin-Mercier point his way to victory more often than not. But in this situation, a win is a win.

This could finally be the year that Sy wins it all. As impressive as Taylor has been, Sy has the experience and has made all the adjustments needed to be a champion.

Expect Sy to use his newly found takedown defense to keep the fight standing and strike from a distance. If he can turn this into a kickboxing fight, which I believe he can, then Sy will be this season’s welterweight champ. Sy to win (-165).

Wilkinson can either strike from the outside to avoid the power of Akhmedov or take the fight to the mat, where he will have a grappling advantage. We’ve seen Akhmedov gas out in the past, and get dropped in two of his fights in the PFL.

As long as Wilkinson stays away from Akhmedov’s power, he should win. I don’t see how else Akhmedov wins other than by a knockout punch. And with Wilkinson so defensively sound, I don’t see that happening. Wilkinson to win (-190).