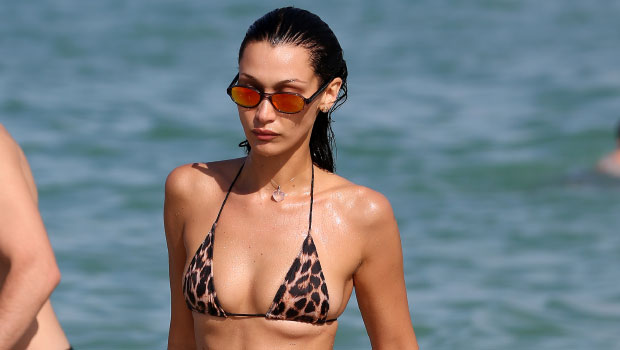 Bella Hadid, 25, took her bikini style to the next level in stunning new photos posted to her Instagram account on Tuesday, September 6! Seven steamy photos and two videos chronicled the supermodel’s sexy vacation with boyfriend/art director Mark Kalman, 34. The first several pics showed Bella smiling over what looked like paddleboard handlebars, as she rocked an eye-catching, colorful patchwork style string bikini. She wore a heart necklace and several rings, and her hair was wet and wavy.  Bella amazed in her perfectly natural surroundings and makeup-free look.

One video showed her collecting smooth shells and pebbles for the camera, as she squeezed out her wet hair and smiled. Even better, fans got a rare glimpse of Mark, who could be seen in the background, wading in the ocean. A second video, also posted to TikTok, was a dreamy montage of Bella and her beau enjoying their surfboards and each other, set to Fleetwood Mac‘s iconic “Dreams.”

Plenty of the gorgeous model’s 54 million-plus followers took to the comments section to gush over the romantic photos and videos. “You are our angel Bella,” reacted a fan, alongside angel and white heart emojis. “Beautiful love,” commented another, while a third wrote, “So good seeing your happiness !!! My heart is full.”

Bella and Mark are flirting with longtime-couple status — back in 2021, Page Six reported that the duo had already been dating for a year, following her split with on-off boyfriend The Weeknd. “They hid it well,” a source told the outlet, explaining how they’d been dating so long without anyone catching on.

“If they went out, he would come out first, get the car, and then she would get into the car. They would drive to a location, and he’d drop her off but not get out and go park the car. They were very diligent about not being seen on a public street at the same time.” The duo were reportedly first spotted together in July of 2020, per Page Six.