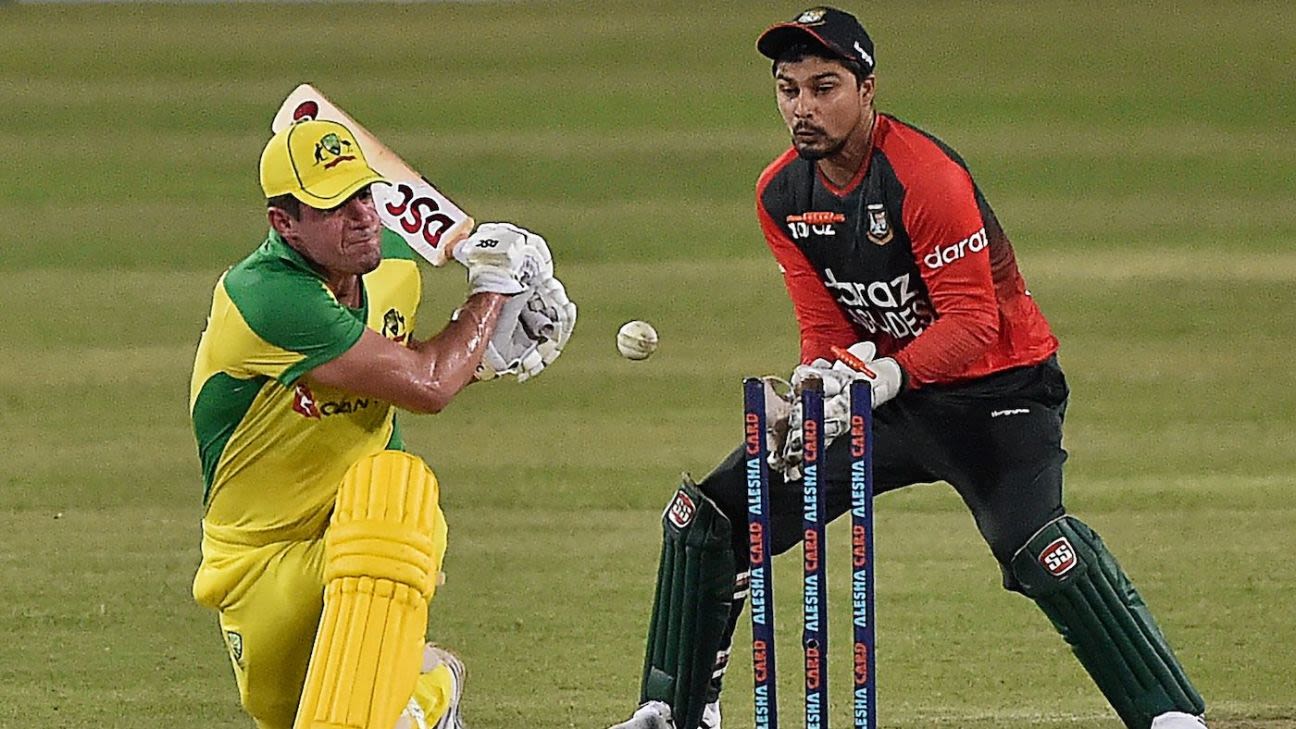 In the space of 48 hours, Bangladesh have put themselves within touching distance of their first series win over Australia in any format. They have exploited the visitors’ weakness on slow, gripping wickets expertly and shown enough ticker with the bat to overcome what remains a strong Australia bowling attack that has been let down by the batters with the continuing exception of Mitchell Marsh.

Australia talk about this being a valuable experience for players to be exposed to conditions they would not see back home, but for some the lessons are taking time to be absorbed. There has been enough evidence over the matches in West Indies and now Bangladesh that being successful in the BBL is not easily translated to the top level.

There was some resentment in the Bangladesh camp over the impact of the strict Covid-19 protocols on player availability for this series, but if that has filtered down to the dressing room they have channeled any frustrations well. Their coach Russell Domingo made a few pointed remarks about the scarcity of meetings between these two teams – securing a series victory with two games to spare would be a strong statement.

There has been no weak link in Bangladesh’s attack: in the first game the star was Nasum Ahmed and in the second Mustafizur Rahman. Mahedi Hasan has controlled the powerplay, Shoriful Islam has been consistent and taken valuable wickets while Shakib Al Hasan is as miserly as ever. On the basis of the first two games Australia may find it difficult to turn things around.

If Bangladesh can have a fit and in-form Mustafizur Rahman at the T20 World Cup it will make a world of difference for them – and the signs are promising. He has now taken seven wickets in his last three T20Is and was confusing Australia’s batters almost every delivery in the second match. “Man, he is a difficult customer,” Ashton Agar said. “He is really good, it’s incredible skill. It’s a great slower ball as well because it’s not too slow and it’s got a lot of revolutions. I got one that kicked quite a bit, they might go low, they might spin a lot, it’s super variable.”

Josh Philippe is among those really struggling to adjust to the conditions that do not allow his favoured hitting-through-the-line strokeplay. In the opening match he was stumped having a big charge at Nasum and in the second was completely outfoxed by a superb cutter from Mustafizur. His top score across five T20I innings in West Indies and Bangladesh is 13.

Although the top order has been a little unconvincing at times there would appear to be little need for Bangladesh to change things unless they want to assess other players.

The indication before the series was that most of the squad would be given a game so after being unchanged in the first two matches there could be some movement. With the openers struggling Ben McDermott could come back into the equation while there may be some rotation among the quicks. Mitchell Starc bruised his hip in the field on Wednesday but is expected to be available.

The nature of the pitch is unlikely to change which means the same challenge for Australia’s batting to adapt. Conditions are hot and humid but so far the threatened thunderstorms have stayed away.

“To have balls spinning quite a lot, balls going low, some kicking up off the surface, let’s be honest it’s very foreign for us. Fantastic that we get this preparation as a lead-up to a World Cup so guys can solidify some plans, we’ve definitely got some work to do.”
Ashton Agar

Andrew McGlashan is a deputy editor at ESPNcricinfo