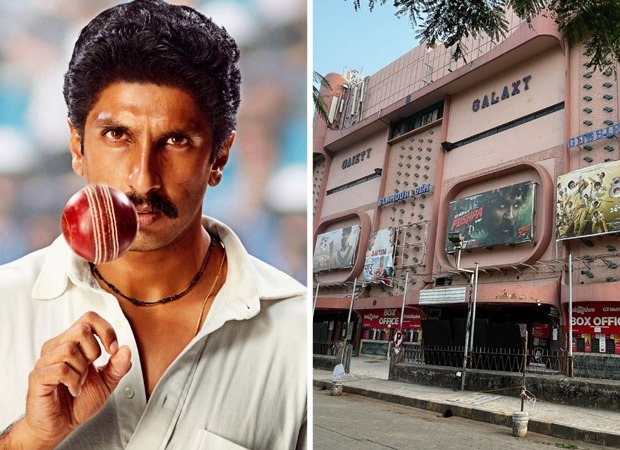 2 weeks ago, the exhibitors were struggling as there were too many films in cinemas and giving each of these films adequate shows was proving to be a headache. At present, the exhibitors are in a fix as all the major upcoming films like Jersey, RRR, Radhe Shyam and Prithviraj have been postponed. The Ajith Kumar-starrer Valimai hasn’t been officially pushed ahead but strong reports suggest that it won’t make it on January 13 in cinemas. The government in their states might also lockdown or shut cinemas. But even if the governments don’t shut down cinemas, the lack of content can compel them to down shutters in the next few weeks. This week and the coming week will not be a problem as the holdover films like Spider-Man: No Way Home and Pushpa are getting decent footfalls. A few properties are also happily playing 83 alongside these two films.

The Delhi government was the first one to shut down cinemas, on December 28. Soon, Haryana decided to shut cinemas in five districts with a high number of cases. Bihar, meanwhile, has also asked cinemas to shut shop. In many states like Punjab, West Bengal, Madhya Pradesh, Odisha, Rajasthan etc., a night curfew has been imposed and cinemas are asked to operate at 50% occupancy. In Gujarat, 100% occupancy is allowed but night curfew is in place in 8 major cities. In Uttar Pradesh, the 50% occupancy rule has been enforced in districts with more than 1,000 active cases. Tamil Nadu has asked cinemas to allow 50% occupancy and as per the latest directive, it’ll have a lockdown on Sunday. Karnataka, meanwhile, has decided to go for a weekend curfew and on weekdays, cinemas can function at 50%.

The crucial state of Maharashtra, however, has still allowed cinemas to function till late night, although a 50% rule is in place since the time theatres reopened on October 22, 2021. But, with cases rising exponentially in Mumbai and other areas, the industry feels that it’s only a matter of time before further restrictions will be imposed.

Shockingly, the closing down of a cinema due to lack of content has already started. Gaiety cinema, one of the 7 theatres in G7 multiplex in Mumbai, has been temporarily shut down. Gaiety along with Gossip was playing 83 with 4 shows each. Now, only the 100-seater Gossip is playing the cricket saga. Manoj Desai, executive director, G7 multiplex and Maratha Mandir Cinema said, “We’ll start shutting our theatres if we don’t get content. I have already shut Gaiety, where 83 was playing. Jersey, Radhe Shyam, RRR and Prithviraj have been postponed. Till how long can we play these holdover films?”

Akshaye Rathi, film exhibitor and distributor told this writer, “Irrespective of whether we remain open or not, the lack of content will ensure many of them will shut down temporarily. Till Pushpa and Spider-Man are collecting well, theatres should be kept open. The day the businesses of these films nosedive, it is a smarter idea to proactively shut down.”

The picture is similar in West Bengal and surrounding states. Satadeep Saha, CEO of SSR Cinemas Pvt Ltd, said, “The Bengali film, Tonic, was doing well. Now, we have no other film lined up. So, content will be an issue for us. Right now, not even one producer will be willing to take a risk and release their film in these uncertain times. At any time, the state government can impose a lockdown. Tonic was doing fantastic business but after the night curfew was imposed and the fear began to spread, the footfalls led to a massive drop. All the upcoming films got pushed.”

Satadeep continued, “Spider-Man and Pushpa have slowed down. Both these films would have done better had the Omicron not reared its ugly head. We would have no other option (but to shut). We can’t run the cinema like this. We have overhead expenses. Also, it’s better to shut down. Who’ll go through the headache of deciding what to play and whether viewers would turn up to watch the film?” He also added, “Had 83 worked, we all would have been sorted for another few weeks.”

Kiritbhai T Vaghasia, the owner of The Friday Cinema, Surat, Gujarat proved to be an exception as he replied, “I am playing only Pushpa in all my 3 screens, from Friday. The evening shows of Pushpa are running house full even today. For the morning and afternoon shows, I am able to sell around 200-250 tickets. If Pushpa slows down, I’ll re-release Sooryavanshi or Antim. However, I’ll not shut down. Until the government does not ask cinemas to shut, my cinema hall will continue to operate. Why should I shut down when I am getting decent footfalls?”

Down South, too, the situation is not as bleak. Ruban Mathivanan of GK Cinemas, Chennai stated, “We don’t know how long the Sunday lockdown will continue. However, the lack of business on Sunday will be compensated by the extended Pongal weekend. Before Sunday lockdown was announced, we were confident that if Valimai gets postponed, then three medium-budget films would arrive in cinemas. Let’s see what happens now.”

However, he made it clear that “There’s no point in shutting down. We have to find content to play, even if it is an older film. Hence, come what may, we would not be shutting down.”

Raj Tadla, who runs Devi 70MM and Sudershen 35MM single-screen theatres in Hyderabad, also confirmed that he won’t be shutting down as a few Telugu films might be up for release. Telangana is a rare state where the chief minister has made it clear that no lockdown or night curfew will be imposed. However, Telugu biggies like RRR and Radhe Shyam have been pushed ahead though a few smaller titles might make it to cinemas in January.

In the rest of the country, however, it’ll be a struggle to find new films. This Friday will see no new Hindi or English release. Next Friday, a Hollywood film, The King’s Man, will be arriving in cinemas if a lockdown is not imposed in the majority of the states. A source told Bollywood Hungama, “Some of the older Hollywood titles like No Time To Die, Dune, House Of Gucci etc would once again re-release in certain theatres from Friday, January 7. From next weekend, No Time To Die and Dune might also get showcasing in IMAX screens.”

The source also added that while none of the Marathi films has been officially postponed, it is unlikely that these movies would release in cinemas.

Meanwhile, two major Gujarati films are up for release in a few weeks. While Siddharth Randeria-starrer Kehvatlal Parivar is up for a release on January 28, Paresh Rawal-starrer Dear Father will arrive in cinemas on February 4. When contacted, Rashmin Majithia, producer of Kehvatlal Parivar told this writer, “We have not yet postponed, but we don’t think that the time is right to release the film into cinemas. We’ll wait and watch how the situation unfolds in the next few days.”

Ratan Jain, the producer of Dear Father, said, “As of now, we are releasing on February 4. We’ll get to know in the next few days if cinemas are allowed to operate in Gujarat and if yes, what restrictions would be imposed. We’ll take a decision by January 15.”

Nevertheless, the industry and trade are confident this time that we can bounce back faster, especially after many experts have assured that a peak would be reached in the next fortnight and there’s a possibility that cases would come down drastically. Akshaye Rathi stated, “As per my limited understanding about the way things are unfolding with this wave, it’s only a matter of time when things can go back to normal. Thanks to the fantastic vaccination drive that has happened in this country and also that the Omicron is going to be the dominant variant very soon, people are recovering in just 4 to 5 days or in some cases, in just 6 to 7 days. As I see it, this wave is going to peak and diminish very, very quickly. It’s only a matter of 1 ½ to 2 months that some degree of normalcy can kick back in. Therefore, it’s about keeping a little bit of patience and dealing with this scenario in a pragmatic way rather than hurrying into any kind of decision. It’s also an opportunity for the producers and exhibitors to align better and make sure that when cinemas reopen, we are better prepared for it and we are ready to strike back as soon as things go back to being more comfortable.”

Raj Tadla had the final word as he said, “This is the final exam of Covid. Hopefully, we’ll pass with flying colours very soon!”

Also Read: EXCLUSIVE: “The best and biggest thing is the love my wife is giving me after watching 83”- Ranveer Singh

Robert Pattinson says comment about not working out for The Batman was a joke: ‘That came back to haunt me’