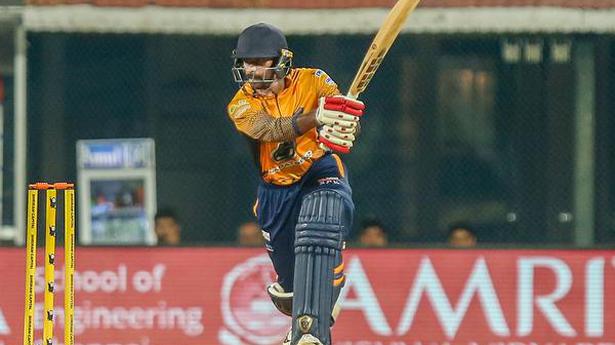 B. Aparajith’s composed 44 and R. Sanjay Yadav’s quickfire 31 (15b, 2×4, 3×6) helped Nellai Royal Kings secure a five-wicket win against Dindigul Dragons in the TNPL match here at the M.A. Chidambaram Stadium on Tuesday.

Chasing 148, skipper Aparajith quickly found his groove in the PowerPlay with a flurry of boundaries through the off-side. At the other end, L. Suryapprakash launched into left-arm pacer R. Suthesh for three boundaries with some beautiful shots down the ground.

Once Surya was dismissed, Aparajith and Pardosh Ranjan Paul (27) consolidated the chase with a 62-run stand for the second wicket.

Dragons had a sniff of a chance when pacer L. Vignesh removed Aparajith (caught & bowled) and Pradosh (bowled) with well-disguised slower deliveries.

But his good work came undone when he missed his length against Sanjay Yadav, who launched him for two consecutive sixes in the 16th over that brought the equation under less than six runs per over.

Nellai’s victory though was set up by its bowlers who restricted Dragons to a modest score of 147/5.

It was then left to R. Srinivasan (60) and Mani Bharathi (30) to get Dragons back on track with an 85-run stand for the third wicket.

Srinivasan started with two boundaries of Trilok Nag — a beautiful cover drive followed by a late-cut through slips, using the pace of the bowler.

Srinivasan, who has played First Class cricket for Tamil Nadu, brought his experience into play, finding boundaries regularly without taking many risks.

Be it fine leg-glance or a cut over point for a six off Trilok, the 35-year-old batsman was in complete control.

Royal Kings got back into the game by removing the two set batsmen in quick succession.

Later, Vivek Raj made a quick unbeaten 32 but, some brilliant death bowling by Athisayaraj helped Royal Kings fight back to keep the Dragons to a modest score.