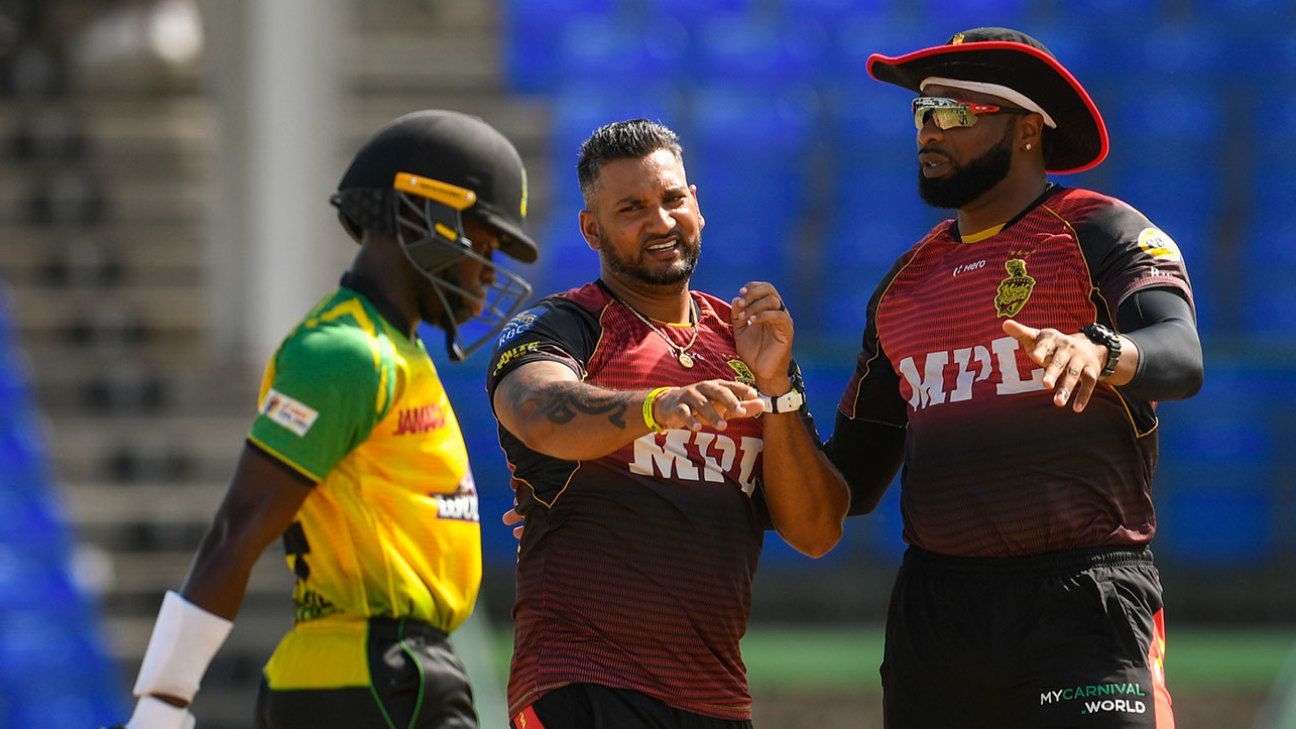 Left-arm spinner Akeal Hosein and right-arm pace bowler Ravi Rampaul combined to wreak havoc with the new ball, reducing Jamaica Tallawahs to 15 for 5 after the Powerplay as Trinbago Knight Riders used the momentum from that early sequence to record a seven-wicket victory at Warner Park.
Imad Wasim and Carlos Brathwaite did their best to bring back respectability to Tallawahs’ innings with an 83-run partnership, but a target of 145 looked increasingly tepid during Lendl Simmons‘ fiery 70 off 45 balls to help cement Knight Riders’ chase with 17 balls to spare.

Kieron Pollard’s decision to bowl first was immediately vindicated by Hosein, who began play with a wicket-maiden that included a gift of a wicket from Kennar Lewis, who laced a half-tracker to Colin Munro at backward point. While Lewis’ dismissal was a matter of placement, the next four to go were the product of poor shot selection after dot ball pressure resulted in an overambitious release shot that failed.

Haiden Ali tried to heave a good length ball on the stumps and skied a top edge to Simmons at short third man. Kirk McKenzie made it two in three balls for Rampaul as an indecisive dab targeting third man resulted in a simple edge behind to Denesh Ramdin. Jason Mohammed chased after a ball that wasn’t full enough to drive and edged Hosein to Simmons at slip before Simmons ended the Powerplay with his third catch, pouching a sharp take again at slip as Rovman Powell edged a quicker ball from Sunil Narine to walk off with an eight-ball duck.

From being in danger of producing a record low total, Imad and Brathwaite dug in and showed the top order that the pitch demons were a figment of their imagination. Brathwaite eventually brought up his second career CPL fifty, but both perished in the last four overs as a consequence of trying to up the run rate.

The only thing that looked like it would ruin Knight Riders’ victory charge was the weather as a dark storm system encroached during the innings break. Only two overs were bowled before play was halted just moments after Narine was given lbw to Imad after missing a reverse sweep. The delay lasted for 49 minutes but once the super sopper did its job, there was no further threat to play being interrupted.

Instead, Simmons was the one creating danger in the stands with each subsequent thunderous strike. His innings could have been curtailed on 17 when Migael Pretorius laid a short-ball trap off the final ball of the Powerplay at deep square leg, but Chris Green shelled a straightforward chance.

Simmons continued to bombard the boundary thereafter, pummeling back-to-back sixes off Edwards in the 13th to bring up a 37-ball half-century as part of a 102-run stand with Munro. Both fell shortly before the target as Pollard and Darren Bravo took Knight Riders safely across the line.