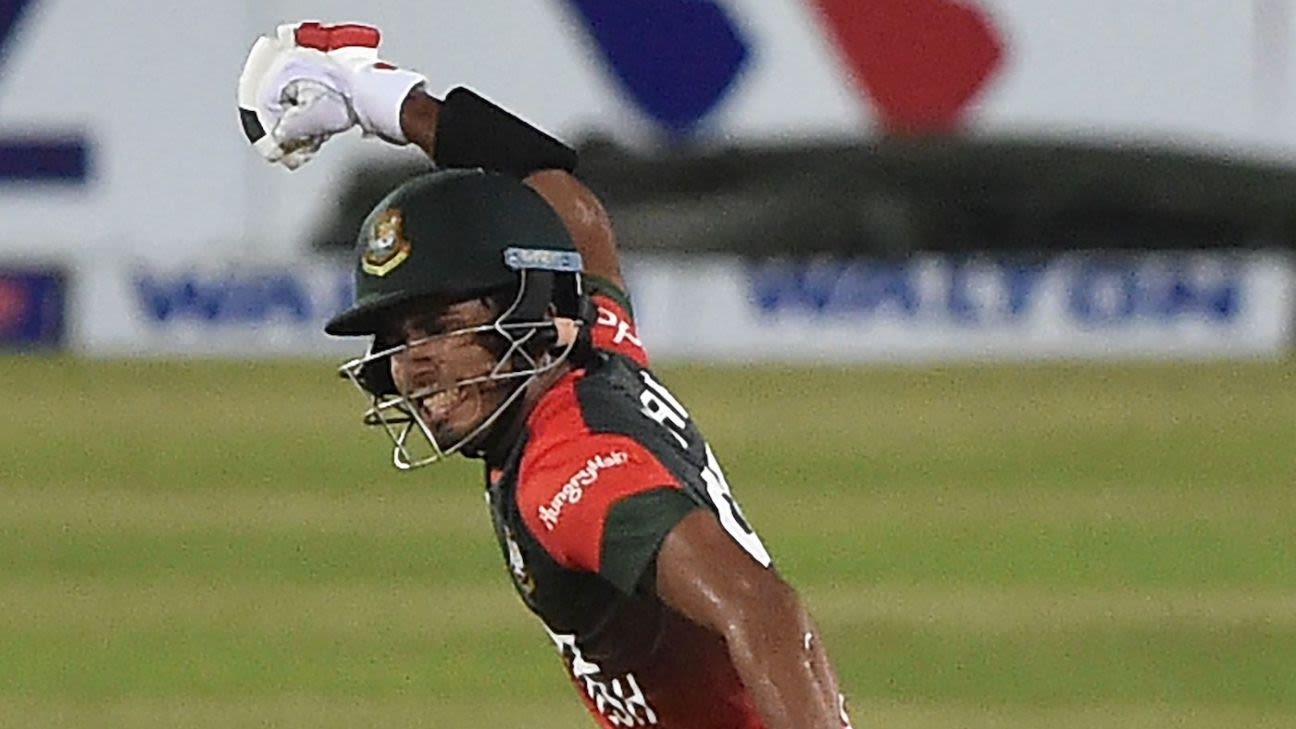 On a difficult, sticky and turning Mirpur deck, 21-year old Afif Hossain hit an unbeaten 31-ball 37 to drag Bangladesh out of a bit of a mess, helping rescue the hosts from 67 for 5 to winning with eight balls to spare. After the victory, Afif said he knew all along that as long as he was not dismissed, Bangladesh would emerge victorious. However, he said that a useful piece of advice from Mahmudullah, the T20I captain, went a long way in achieving that outcome.

“When I went out to bat, Riyad bhai just told me one thing. To take two-three overs to settle in,” the 21-year old said. “And personally, my ambition was to return after finishing the game. First thing I did was to assess the wicket and to understand what needs to be done on this surface.

“I was aware that if I stay late, I can finish the match. The plan for both Nurul Hasan and me was to just score without losing a wicket because the run-rate was under check.”

After the match, Mahmudullah said that Afif and Nurul showed “maturity” in their partnership. He said that their half-century stand brought “relief” to a “tensed” camp that was downcast after sliding into a losing position after a terrific bowling show.

The T20I captain also praised Shakib Al Hasan. Shakib blitzed his way to a 17-ball 26 to keep Bangladesh ahead of the required run-rate early on after returning 1 for 22 in his four overs. Mahmudullah said that “Shakib once again showed how important a player” he is for the Bangladesh team. Shakib’s momentum-building innings, in a low-total run-chase, allowed Afif and Nurul to play risk-free cricket when the pressure was high.

That Afif had to take Bangladesh only past 122, however, was courtesy of the bowling effort in the first innings. Left-arm seamers Mustafizur Rahman and Shoriful Islam shared five wickets for 50 runs in their combined eight overs, and Afif said their returns had equal impact on the match result that now sees Bangladesh lead Australia 2-0 in the five-match series.

“Our pace bowlers made full use of the home advantage we have,” Afif said. “It was natural that our bowlers would bowl to a plan that is successful on these decks. But it needed backing up from the fielders too, which we received.”

Mustafizur – who finished with an economy of 5.75 and the wickets of Josh Philippe, Matthew Wade and Ashton Agar – was also the beneficiary of praise from the opposite camp. Moises Henriques, who has played both with and against Mustafizur in the IPL, said that for Australia to put up better totals, it would be paramount to combat the sort of skill Mustafizur brings to games on slower surfaces.

“Today Mustafizur showed how quickly he adapts,” Henriques said after the match. “He bowled 24 slower balls (laughs) and did not bowl anything pace on. He just summed up the conditions really well tonight.

“The amount of revolutions he gets on the slower ball even on a good wicket is hard to play anyway, let alone on a surface like that. We need to find a way to combat that, and try and get as many runs as possible. It’s quite clear it’s not a 160 to 200 wicket, but we need to find a way to get to 140 or 150 whatever that might be.”